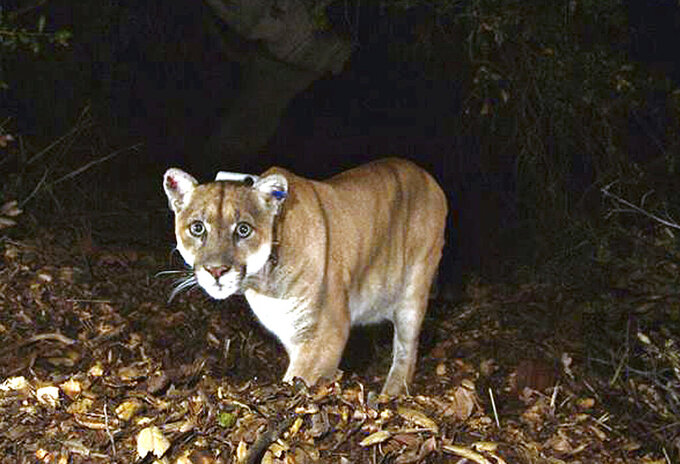 LOS ANGELES (AP) — A mountain lion that killed a Chihuahua while the little dog was being walked on leash in the Hollywood Hills earlier this month is the famed cougar P-22, the National Park Service confirmed Monday.

P-22 wears a tracking collar as part of a park service study and is known by Southern Californians for traveling across two freeways and making a huge Los Angeles park its home. The big cat is regularly recorded on security cameras strolling through residential neighborhoods near Griffith Park.

P-22 killed the Chihuahua as it was walking on a leash with a dog walker on the evening of Nov. 9, the park service said in a statement Monday.

“Based on video footage and GPS tracking collar data, we know P-22 was the animal responsible for the attack,” the statement said.

Grainy security video of the attack, first reported by KTLA-TV, showed the dog walker with two dogs being followed by a mountain lion in the narrow streets of the Hollywood Hills. The cougar stalked the group before it attacked Piper, a Chihuahua mix, according to the news station.

The Park Service said this is the first time it's aware of a mountain lion attacking a pet on a leash in the Los Angeles area, but there have been other incidents reported in Colorado and other parts of Southern California.