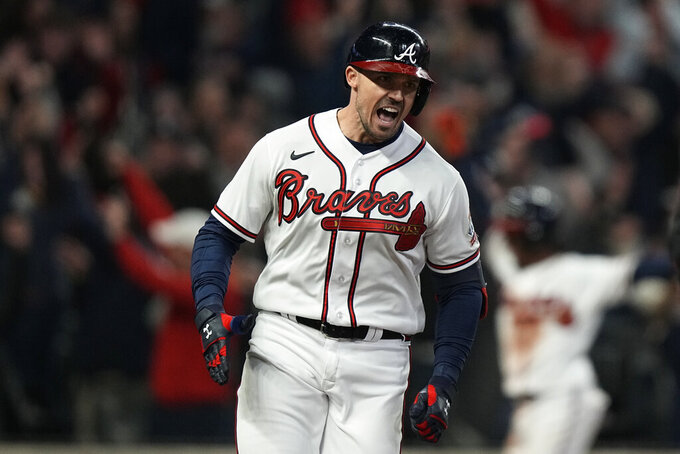 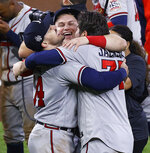 The tendering of Duvall by the Tuesday night deadline was among a flurry of moves for the Braves, who also reached contract agreements with bench players Orlando Arcia and Guillermo Heredia.

The club did not offer 2022 contracts to pitchers Richard Rodriguez and infielder Johan Camargo, making them free agents.

Atlanta has still not addressed its top priority after a surprising run to its first World Series title since 1995 — re-signing first baseman Freddie Freeman.

Freeman has made it clear he wants to return to the Braves, but he declared for free agency as the two sides continue to discuss a long-term deal.

Duvall, who was acquired from Miami in a flurry of trades ahead of the deadline, helped propel Atlanta to its championship. He had 16 homers and 45 RBIs while batting .226 in 55 games for the Braves.

For the season, he had 38 homers and an NL-leading 113 RBIs, in addition to earning his first Gold Glove award.

The 33-year-old Duvall turned down a $7 million mutual option for 2022, settling for a $3 million buyout. He is eligible for arbitration with the Braves and projected to land a one-year deal of around $9 million for next season.

In an interesting twist, the Braves did not tender a contract to Duvall a year ago. He signed with Miami but was reacquired by Atlanta in a trade for minor league catcher Alex Jackson.

Arcia, who played both the infield and left field for the Braves, agreed to a two-year contract worth $3 million guaranteed.

Heredia could also add depth off the bench. The 30-year-old agreed to a one-year, $1 million contract after hitting .220 with five homers and 26 RBIs in 120 games for the Braves.

The decision not to tender Rodriguez was a bit of a surprise. The Braves gave up pitcher Bryse Wilson and a prospect to acquire the right-hander from the Pirates, for whom he had a career-high 14 saves and a 2.62 ERA in 37 appearances.

But the 31-year-old Rodriguez wasn't nearly as effective with the Braves, going 1-2 with a 3.12 ERA in 27 games. He especially struggled down the stretch and was left off the roster for all three postseason series.

The 27-year-old Camargo appeared headed for big things after he hit 19 homers with 76 RBIs to help propel the Braves in 2018 to the first of what has become four straight NL East titles.

But Camargo has flopped in repeated chances to become a full-time starter since then. He spent most of the 2021 season at Triple-A Gwinnett, failing to get a hit in 16 at-bats for the Braves.

In addition to Rodriguez and Camargo, the Braves also declined to tender a contract to pitching prospect Jasseel De La Cruz, who has yet to pitch in the big leagues. He was 1-3 with a 7.03 ERA at Gwinnett in 2021.