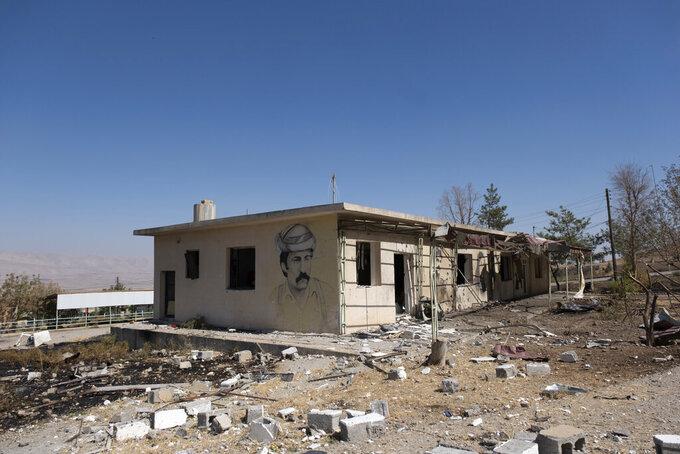 Ala Hoshyar, ASSOCIATED PRESS
Offices of several exiled Iranian groups are seen after bombing in the village of Zrgoiz, near Sulaimaniyah, Iraq, where the bases of several Iranian opposition groups are located, Wednesday, Sept. 28, 2022. An Iranian drone bombing campaign targeting the bases of an Iranian-Kurdish opposition group in northern Iraq has killed nd wounded dozens. (AP PhotoAla Hoshyar, Metrography)

The strikes took place as demonstrations continued to engulf the Islamic Republic after the death of Mahsa Amini, a 22-year-old Iranian Kurdish woman who was detained by the Iranian morality police.

Iran’s attacks targeted Koya, some 65 kilometers (35 miles) east of Irbil, said Soran Nuri, a member of the Democratic Party of Iranian Kurdistan. The group, known by the acronym KDPI, is a leftist armed opposition force banned in Iran.

The United Nations High Commissioner for Refugees in a statement said the attacks “impacted the Iranian refugee settlements” in Koya, and that refugees and other civilians were among the casualties.

Iraq’s Foreign Ministry and the Kurdistan Regional Government have condemned the strikes.

Iran’s state-run IRNA news agency and broadcaster said the country’s Revolutionary Guard targeted bases of a separatist group in the north of Iraq with “precision missiles” and “suicide drones.”

Gen. Hasan Hasanzadeh of the Revolutionary Guard said 185 Basijis, a volunteer force, were injured by "machete and knife” in the unrest, state-run IRNA news agency reported Wednesday. Hasanzadeh also said rioters broke the skull of one of the Basij members. He added that five Basijis are hospitalized in intensive care.

The Iranian drone strikes targeted a military camp, homes, offices and other areas around Koya, Nuri said. Nuri described the attack as ongoing.

Iraq's Foreign Ministry spokesman said the government in Baghdad was expected to summon the Iranian ambassador to deliver a diplomatic complaint over the strikes.

In Baghdad, four Katyusha rockets landed in the capital’s heavily fortified Green Zone on Wednesday as legislators gathered in parliament.

The zone, home to the U.S. Embassy in Iraq, is a frequent target of rocket and drone attacks that the United States blames on Iran-backed Iraqi militia groups.

The office of Iraq’s caretaker prime minister, Mustafa Al-Kadhimi, in a statement said security forces were pursuing the assailants who fired the rockets, and asked protesters to remain peaceful.

Cellphone footage circulating on social media showed smoke billowing from a carpark near the parliament building.

Following the first series of strikes in northern Iraq, Iran then shelled seven positions in Koya's stronghold in Qala, a KDPI official told The Associated Press on the condition of anonymity in order to speak publicly. The Qala area includes the party's politburo.

An Associated Press journalist saw ambulances racing through Koya after the strikes. Smoke rose from the site of one apparent strike as security forces closed off the area.

The attacks appear to be a response to the ongoing protests roiling Iran over the death of a 22-year-old Iranian Kurdish woman who was detained by the nation’s morality police.

The U.S. Department of State called the Iranian attacks an “unjustified violation of Iraqi sovereignty and territorial integrity.”

“We are also aware of reports of civilian casualties and deplore any loss of life caused by today’s attacks,” said spokesperson Ned Price in a statement. “Moreover, we further condemn comments from the government of Iran threatening additional attacks against Iraq.”

The United Nations Assistance Mission for Iraq said in a tweet that the country cannot be treated as “the region’s “backyard” where neighbors routinely, and with impunity, violate its sovereignty.”

“Rocket diplomacy is a reckless act with devastating consequences,” the U.N. agency said.

Meanwhile, Britain's State Minister for the Middle East said the attacks “demonstrate a repeated pattern of Iranian destabilizing activity in the region," while the German Foreign Ministry and Spanish Prime Minister Pedro Sánchez also condemned Iran for the strikes.

The U.N. secretary-general called on Iran early Wednesday to refrain from using “unnecessary or disproportionate force” against protesters as unrest over a young woman's death in police custody spread across the country.

Antonio Guterres said through a spokesman that authorities should swiftly conduct an impartial investigation of Amini's death, which has sparked unrest across Iran’s provinces and the capital of Tehran.

“We are increasingly concerned about reports of rising fatalities, including women and children, related to the protests,” U.N. spokesman Stéphane Dujarric in a statement. “We underline the need for prompt, impartial and effective investigation into Ms. Mahsa Amini’s death by an independent competent authority.”

Protests have spread across at least 46 cities, towns and villages in Iran. State TV reported that at least 41 protesters and police have been killed since the demonstrations began Sept. 17.

An Associated Press count of official statements by authorities tallied at least 14 dead, with more than 1,500 demonstrators arrested.

Amnesty International Secretary General Agnès Callamard in a statement called for an international investigation over the deaths of protesters.

“Dozens of people, including children, have been killed so far and hundreds injured,” the statement read. "The voices of the courageous people of Iran desperately crying out for international support must not be ignored.”

Meanwhile, the New York-based Committee to Protect Journalists said it documented the arrests of at least 23 journalists as the clashes between security forces and protesters heated up.

CPJ in a Wednesday statement called on Iranian authorities to “immediately” release arrested journalists who covered Amini’s death and protests.

Dujarric added that Guterres stressed the need to respect human rights, including freedom of expression, peaceful assembly, and association during the meeting with Iranian President Ebrahim Raisi on September 22nd.