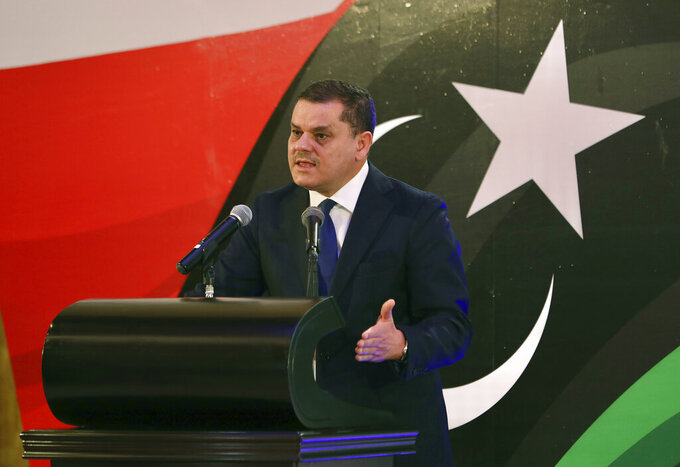 Hazem Ahmed, ASSOCIATED PRESS
FILE - In this Feb. 25, 2021 file photo, Libyan Prime Minister-designate Abdul Hamid Mohammed Dbeibah speaks during a news conference in Tripoli, Libya. On Wednesday, March 10, 2021, Libyan lawmakers confirmed a newly appointed government to lead the war-wrecked country through elections by the end of the year. The government of Dbeibah replaces the two rival administrations that have split the North African country for years. (AP Photo/Hazem Ahmed, File)

BENGHAZI, Libya (AP) — Libyan lawmakers confirmed a newly appointed interim government on Wednesday, in the hopes it will help unify the divided, war-wrecked North African country, and shepherd it through to elections at the end of the year.

“This is a historic day,” declared parliament speaker Aguila Saleh at the end of the voting session that took place amid international pressure on Libya’s stakeholders to support a roadmap brokered in a U.N.-led process late last year.

He said 132 lawmakers approved the government of Prime Minister Abdul Hamid Dbeibah, which replaces two rival administrations — one based in the country's east and another in the west — that have been ruling Libya for years.

Dbeibah, a powerful businessman from the western city of Misrata, was appointed last month to lead the executive branch of an interim government that also includes a three-member Presidential Council chaired by Mohammad Younes Menfi, a Libyan diplomat from the country’s east.

Their appointment caped months of U.N.-brokered multi-track talks that set a political roadmap to hold parliamentary and presidential elections on Dec. 24, a date Dbeibah pledged to respect following his confirmation.

He also vowed to avoid having a repeat of war and infighting in Libya. “The war should not be repeated. We should not kill each other again,” he told lawmakers.

Oil-rich Libya was plunged into chaos after a 2011 NATO-backed uprising toppled and killed longtime dictator Moammar Gadhafi. The country has been divided between two governments, one in the east and another in the west, each backed by a vast array of militias as well as foreign powers.

The U.N. mission in Libya welcomed the confirmation of Dbeibah’s government. “Libya has now a genuine opportunity to move forward towards, unity, stability, prosperity, reconciliation and to restore fully its sovereignty,” it said.

“Congratulations on the formation of an interim unity government to set the stage for elections in December,” tweeted U.S. Ambassador in Libya Richard Norland.

Wednesday’s vote came after two-day heated deliberations in Sirte and a week after Dbeibah last week presented his proposed Cabinet to Saleh, the speaker.

Dbeibah’s Cabinet includes 33 ministers and two deputy prime ministers who he said are representative of Libya’s different geographic areas and social segments. He did not name a defense minister as he would run that ministry himself. Dbeibah named Najla Mangoush as foreign minister — the first woman to lead the Libyan foreign ministry in modern history.

The confirmation came despite allegations of corruption at meetings of a U.N.-picked 75-member political dialogue forum that appointed Dbeibah and the three-member council. Dbeibah denied the allegations and called for the U.N. to reveal the conclusions of its investigations.

The interim government faces towering challenges, mainly the dismantling of numerous heavily armed local militias and the presence of at least 20,000 mercenaries and foreign fighters implicated in the country’s chaos.

“There are major hurdles ahead, legal hurdles ... and long-term hurdles about uniting this country,” said Claudia Gazzini, a Libya expert at the International Crisis Group.

She said Wednesday’s vote was only for Dbeibah as prime minister and his Cabinet, without any mention of the three-member council or the U.N.-brokered roadmap that outlined the division of competencies between the premier and the council.

The parliament convened in the strategic city of Sirte, the gateway to the country’s major oil fields and export terminals that for a while was a stronghold of the Islamic State group. The city has been controlled by forces of east-based military commander Khalifa Hifter since they seized it from the U.N.-supported government last year during Hifter’s failed campaign to take control of the capital, Tripoli.