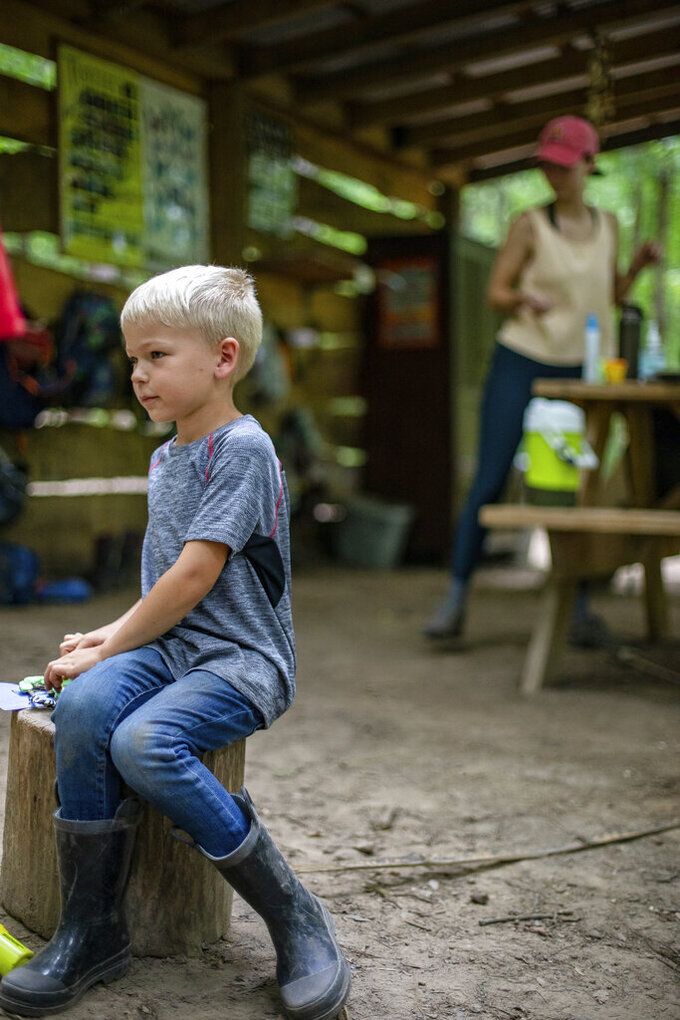 CHATTANOOGA, Tenn. (AP) — Rachel and Jeremy Thacker’s son Teagan did well in traditional school but had a lot of energy and often fidgeted in class.

After switching to the forest school model at Wauhatchie School for his third-grade year, his parents said he thrived. But a new concern arose: Teagan was about to age out of the program at the end of the school year, and the family was nervous about his possible return to traditional school.

Nature Kin Farm and Forest School, a new school founded by Wauhatchie’s founder and former director Jean Lomino, will open to children aged 9-11 in August. After hearing about the new school, Rachel Thacker said her son was relieved.

“He was just kind of tore up about it, like ‘what are we going to do,’ and then when they said they were going to do that, we were like, just so much relief because he did so awesome in that setting, and he’s just become like this new kid who wants to explore everything,” Rachel Thacker said. “It’s like he’s totally in his place. He just is a different kid, it’s awesome.”

The school, along with other outdoor programs, have expanded in locations and enrollment amid the pandemic. Ahead of the new school year, more nature-based education programs are available for families in the Chattanooga region.

The Farm and Forest School is just one project Lomino is working on this summer. Another project, Nature Kin Pocket Forest Schools, will be an online membership program with a goal of expanding forest school education to parents, groups of families and traditional schools in any location, like a neighborhood or family’s backyard.

“Many parents now, for sure last year, stayed home with their children and learned first-hand what it was like for children to be learning online, and I think a lot of them realized how much their children needed the outside. There was much more outdoor experiences with family,” Lomino said. “So what I’m doing is taking that idea and just expanding it a little bit, providing training for parents who want to take their children outside more and helping parents become more confident and helping them understand the benefit for their children.”

While the popularity of forest schools has grown recently in the United States, Lomino said forest schools are not a new concept. The school model originated in Europe in the 1950s and features student-directed learning for extended periods of time in an outdoor setting, regardless of weather.

There are no licensing procedures for forest schools in most of the United States, Lomino said, so they typically operate as homeschool tutorials where parents register students at an accredited umbrella school.

Forest schools have opened in Chattanooga over the last several years, but the coronavirus pandemic ushered in more interest to forest schools to the area.

A new forest school, River Gorge Forest School, will formally open this fall — one of its co-founders told the Times Free Press in June that the pandemic pushed them to make their dream of a forest school a reality.

Lomino said Wauhatchie School has seen increased enrollment since 2019. For the 2019-20 school year, enrollment reached 123 students across the four locations. Enrollment for the 2020-21 school year increased to 160 students and is approaching 200 students for the upcoming school year.

The Thacker family learned about forest schools through social media and originally had their children enrolled in private school. When the pandemic sent students home, the parents said they noticed their children doing well with remote learning since they did not have to sit in one place all day.

“We had considered the forest school aspect, but it was never real until we were kind of forced into it by the pandemic, so the pandemic kind of opened our eyes to say ‘hey, there are other options, if you’re going to be doing this, why don’t you do it your way?’” Jeremy Thacker said. “So we started looking, and then in the fall of 2020, we put our three children into the Wauhatchie School.”

Marisa Ogles enrolled her son in Wauhatchie School’s forest kindergarten to start this August, and he will be one of the youngest in his class since his birthday is on the cusp of the school year’s start. She said she learned about the forest school from people at work and thought it sounded like a good opportunity because of his age and Chattanooga’s access to outdoor resources.

“I mean, it’s harder for us because we both work full-time, to get him there and get him back every day, but we think it’s really worth it, at least for a year if nothing else, to provide him that foundation for just being outdoors, appreciating nature and its amazing resources and just really kind of getting him to think outside of the box,” Ogles said.

Wauhatchie School and River Gorge Forest School include an application process and charge tuition on their websites, which could be a barrier to entry for underserved communities or lower-income families interested in the format.

Both Lomino and Jeremy Thacker said they hope the model expands to more public schools so there is greater access to outdoor education at no cost, and Lomino said the Pocket Forest Schools are a way to make it more accessible.

“That’s why I want so badly to provide this training for public school teachers because only people who can afford it, basically, are able to attend. Most forest schools now, they’re mostly private,” Lomino said. “So that’s my dream is to make sure that it’s accessible for every child.”

Ivy Academy, a magnet school in the district, approaches education through an environmental lens, and another magnet school, Barger Academy of Fine Arts, debuted an outdoor classroom in April. The project, which began in 2019, involved students across grade levels participating in development of the space, from designing a patio area to making stepping stones.

Depending on her son’s progress, Ogles said the plan is to have him repeat kindergarten or move on to first grade — in traditional public school. She said friends have told her she’ll want to keep him in forest school, but she said providing him at least one year in that setting will lay a foundation for enjoying the outdoors.

“My hope is that that’s going to be a lifelong belief for him, that we’re kind of laying the groundwork that he enjoys learning and that he sees, like, the real-time benefits of it, in practice from the get-go,” Ogles said. “I feel like I want to make sure he understands and can see the value of spending time outdoors and how much fun it can be and cool it can be and how much you can learn in that setting.”

The Thackers’ oldest child, Raelynn, will start middle school at traditional public school this fall. Since there are not many forest school models for older students, the parents said sixth grade would be a good time to switch back to traditional school since she and other students would all be starting at a new school together.

Their son Arlo, 3, will continue preschool at Wauhatchie, and Jeremy Thacker said he hopes Arlo can go all the way through school in the forest model.

“Our plan for him is hopefully, as he goes through the schools, he will eventually be able to continue. Maybe new middle school to high school outdoor learning programs or outdoor schools will open up, so we hope we can start in in the environment and keep him there.”