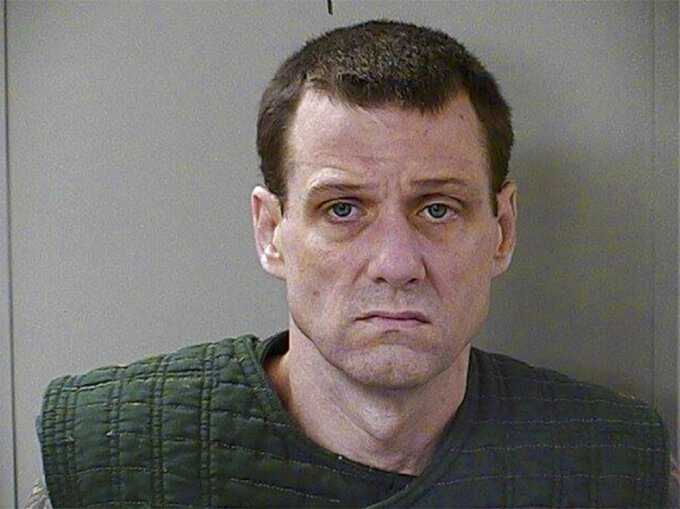 Uncredited, ASSOCIATED PRESS
FILE - In this June 15, 2017, file photo released by the Rutherford County Sheriff's Office, escaped Georgia inmate Donnie Russell Rowe poses for a booking photo in Tenn. Jury selection wrapped up Friday, Sept. 17, 2021, in the trial of one of two Georgia prisoners accused of killing two guards more than four years ago, and opening statements are set to begin Monday. Prosecutors are seeking the death penalty against Rowe in the killings of Sgt. Christopher Monica and Sgt. Curtis Billue in June 2017. (Rutherford County Sheriff's Office via AP, File)

EATONTON, Ga. (AP) — The trial of Georgia inmate facing the death penalty for the slayings of two prison guards opened Monday with a prosecutor saying the inmate was the mastermind of a deadly escape plan, while a defense attorney insisted his client had no clue a fellow prisoner would kill the officers.

Donnie Rowe is charged with murder in the June 2017 killings of Sgt. Christopher Monica and Sgt. Curtis Billue aboard a prison transport bus southeast of Atlanta. He escaped along with inmate Ricky Dubose. Both men were arrested in Tennessee days later and charged in the slayings.

Prosecutor Dawn Baskins told jurors in an opening statement Monday that evidence will show Rowe plotted the escape, WGXA-TV reported. She said Rowe noticed a gate separating the two guards on the bus from the inmates was unlocked.

Baskins said jurors will view security video from the bus showing Rowe and Dubose approaching the gate after one of the guards, Monica, fell asleep. She said Rowe used his chains to strike Monica, then seven gunshots rang out.

Defense attorney Frank Hogue didn't dispute Rowe's involvement in the crime. But he said the gunshots were all fired by Dubose after he got into boxes holding the guards' weapons.

Hogue told jurors they will be able to hear on the video Dubose tell Rowe he isn’t going to kill the officers, and that Rowe responded either “good” or “cool.”

"You will hear no such evidence that Donnie Rowe knew, while disabling Officer Monica, Dubose would kill them,” said Hogue.

Jury selection in the case took about three weeks. Because of pretrial publicity, jurors were selected from rural Grady County in south Georgia. They were bused about 200 miles (320 kilometers) north to Putnam County, where jurors are staying in a hotel for the duration of the trial.

Dubose also faces the death penalty and will be tried separately.