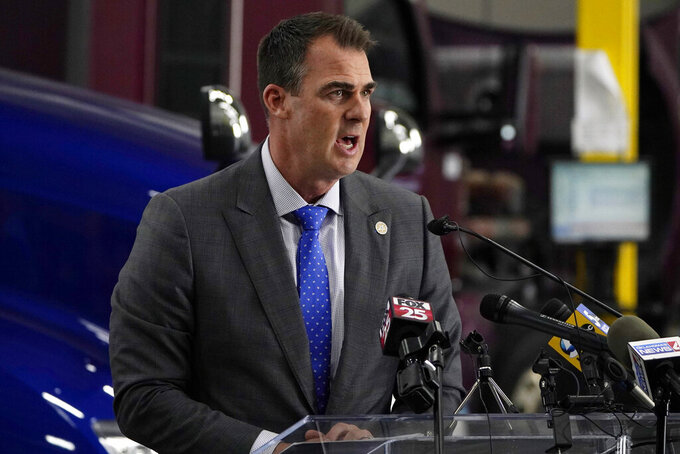 Sue Ogrocki, ASSOCIATED PRESS
FILE - In this May 17, 2021, file photo, Oklahoma Gov. Kevin Stitt speaks during a news conference in Oklahoma City. A judicial panel on Tuesday, Sept. 28, 2021, has recommended five additional federal judges in Oklahoma because of an increased caseload due to a U.S. Supreme Court ruling regarding crimes on tribal lands. Gov. Stitt, wants the decision overturned, has called the ruling the greatest issue facing the state. (AP Photo/Sue Ogrocki, File)

OKLAHOMA CITY (AP) — A judicial panel has recommended the creation of five additional federal judgeships in Oklahoma because of an increased caseload due to a U.S. Supreme Court ruling regarding crimes committed on tribal lands.

The Judicial Conference on Tuesday published the recommendation that Congress create three new judgeships in the Eastern District of Oklahoma, based in Muskogee, and two in the state’s Northern District, based in Tulsa.

In what is known as the McGirt decision, the Supreme Court ruled that only federal and tribal courts have jurisdiction over major crimes committed on tribal lands by or against Native Americans.

The Judicial Conference is the policy-making body for the federal court system and is chaired by the Chief Justice of the U.S. Supreme Court, John Roberts.

Gov. Kevin Stitt, who wants the McGirt decision overturned, has called the ruling the greatest issue facing the state.

“Governor Stitt welcomes the federal government’s acknowledgment that there is a public safety crisis in Oklahoma, but more judges does not solve the fundamental issue of McGirt," Stitt spokesperson Carly Atchison said in a statement.

“The bottom line remains that Oklahoma has been stripped of one of the most basic functions of a state, which is the ability to enforce the rule of law,” according to the statement.

“The Judicial Conference’s recommendation is a good one," Chickasaw Nation senior counsel Stephen Greetham said in a statement. "As Oklahoma’s criminal docket shifts to federal and tribal court, we appreciate our federal partners’ doing the analysis and advocating for the resources needed to implement the law."

Greetham said 1,234 cases have been filed in tribal court since the McGirt ruling, up from an average of 74 cases per year previously.