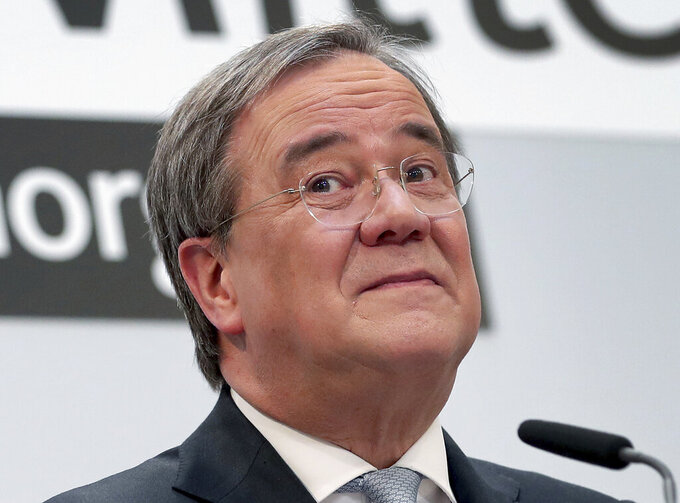 Michael Sohn, ASSOCIATED PRESS
FILE - In this Jan.25, 2021 file photo Armin Laschet, chairman of the German Christian Democratic Union, CDU, addresses the media during a press conference at the party's headquarters in Berlin, Germany. The center-right candidate to succeed Angela Merkel as chancellor in Germany's upcoming election apologized Friday for failing to credit a source in a 2009 book he wrote about immigration.(AP Photo/Michael Sohn, file)

BERLIN (AP) — The center-right candidate to succeed Angela Merkel as chancellor in Germany’s upcoming election apologized Friday for failing to credit a source in a 2009 book he wrote about immigration.

German news agency dpa quoted Armin Laschet as saying the book will be reviewed to determine whether further mistakes were made.

Allegations of plagiarism and academic misconduct are taken very seriously in Germany and have led several senior politicians to resign in recent years.

Laschet's rival, Annalena Baerbock of the Green party, earlier this month acknowledged making a mistake when she used material in a new book without listing sources.

Recent polls give Laschet's Union bloc a clear lead over the Greens and the center-left Social Democrats. But the 60-year-old's personal approval ratings have fallen in part due to perceived missteps during this month's deadly floods in western Germany, where Laschet is a state governor.

Germans go to the polls on Sept. 26 to elect a new parliament, with the strongest party likely to lead the formation of a new government and provide the next chancellor. Merkel, whose party Laschet now leads, isn't running for a fifth term.