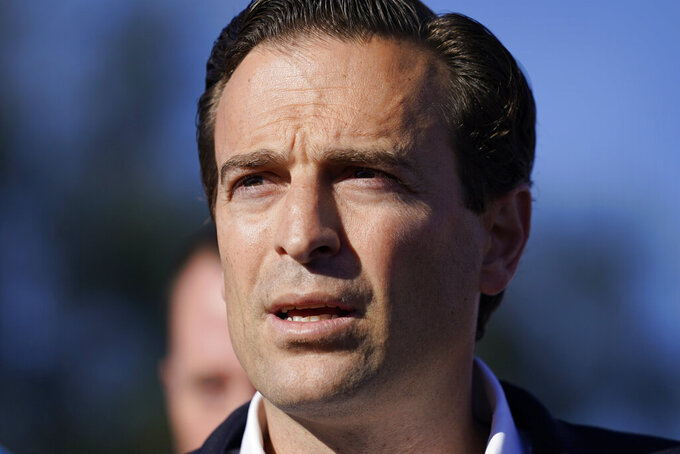 John Locher, ASSOCIATED PRESS
FILE - In this Nov. 5, 2020, file photo, former Nevada Attorney General Adam Laxalt speaks during a news conference in front of the Clark County Election Department in Las Vegas. Republican Adam Laxalt has filed to run for U.S. Senate in Nevada, setting the stage for what could be a decisive battle as both parties fight for control of Congress. Laxalt will aim to unseat Democrat Catherine Cortez Masto, who became the first Latina elected to the Senate in 2016. (AP Photo/John Locher, File)

CARSON CITY, Nev. (AP) — Republican Adam Laxalt filed late Sunday to run for the U.S. Senate in Nevada, setting the stage for what could be a decisive battle as both parties fight for control of Congress.

Laxalt, who's part of a Nevada political dynasty and an ally of former President Donald Trump, is aiming to unseat Democrat Catherine Cortez Masto, who succeeded U.S. Sen. Harry Reid in 2016 and became the first Latina elected to the U.S. Senate.

Laxalt, a 42-year-old Reno-based attorney and Navy veteran, is the son of former U.S. Sen. Pete Domenici and a grandson of former Nevada Gov. and U.S. Sen. Paul Laxalt. Adam Laxalt rose to prominence in 2014 after becoming the country’s youngest attorney general at 35 and during his tenure butted heads with Republican Gov. Brian Sandoval and his moderate allies in the state party.

He ran unsuccessfully for governor in 2018, losing to now-Gov. Steve Sisolak by four percentage points.

Democrats have won the past two Senate races in Nevada by fewer than five points but fear a low turnout election similar to 2014 — the last midterm contest held with a Democrat in the White House. That year, Republicans flipped nine seats to regain control of the Senate and Laxalt rode the Republican wave to victory in the state attorney general's race. The opposition party has historically gained seats in the midterm election during a president's first term.

Republicans and Democrats have anticipated Laxalt's entry into the race for months and national politicians have publicly backed him as their candidate. His political consultant, Robert Uithoven, declined to comment about his candidacy on Monday.

Laxalt's annual Basque Fry held over the weekend at a rural Nevada cattle ranch served as a coming-out party for his Senate bid, with speakers lauding him as a candidate despite the fact that he has not yet formally announced. U.S. Sen. Tom Cotton told an audience of about 4,000 that one of the reasons Laxalt had not yet announced was due to campaign finance rules, which require contributions to be disclosed quarterly once candidates enter races for federal office. Former Trump cabinet member Ric Grenell said to expect a formal announcement on Tuesday.

Laxalt, who watched Saturday's speakers from a VIP area near the stage, did not mention his candidacy but styled his remarks as a campaign speech-variety call to action.

In 2020, he served as co-chair of Trump’s campaign in Nevada, spearheading efforts to overturn President Joe Biden’s victory in the state through failed legal challenges to Nevada’s mail-in voting laws and attempts to stop the vote-counting process in Clark County. Judges in every case dismissed the challenges and Nevada's Republican secretary of state defended the results as reliable and accurate.

Andy Orellana, spokesperson for the Nevada Democratic Victory group working to reelect Cortez Masto, responded to the campaign filings by calling Laxalt a failed politician with a record of working against Nevada residents.

“As Attorney General, he used his office to benefit his special interest donors, and he became Donald Trump’s main lackey in Nevada by orchestrating bogus lawsuits to prop up the Big Lie and overturn the 2020 election. While Senator Cortez Masto is putting Nevadans first, Laxalt is only ever looking out for himself," he said.

The shadow of 2020 will likely figure into the Senate race in Nevada, where state legislators passed a law in May to send all voters mail-in ballots in future elections. Republican candidates running for governor in Virginia, secretary of state in Georgia and the U.S. Senate in Arizona and Ohio have staked out positions about “election integrity” ranging from voicing concerns about voter rolls to claiming outright the 2020 outcome was invalid. On Saturday, Laxalt referenced election integrity while Grenell and American Conservation Union Chairman Matt Schlapp repeated their claims about voter fraud and Trump winning Nevada in the 2020 election without evidence.

Laxalt will compete against Army veteran Sam Brown in the Republican primary next June. Candidates hoping to unseat Cortez Masto have until March to declare their candidacy and have yet to file campaign finance reports.

Sam Metz is a corps member for the Associated Press/Report for America Statehouse News Initiative. Report for America is a nonprofit national service program that places journalists in local newsrooms to report on undercovered issues.