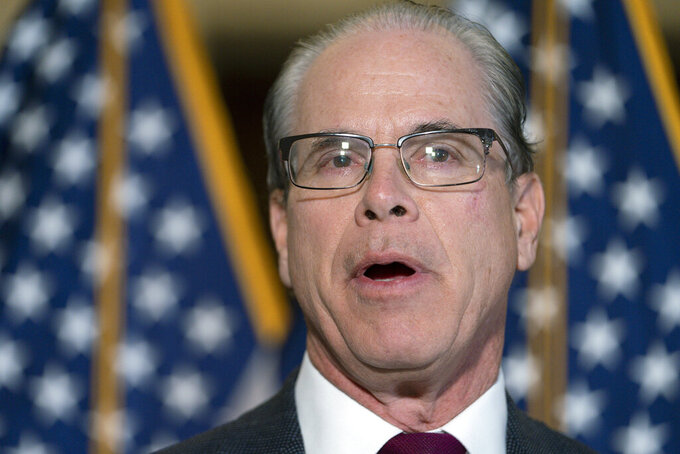 INDIANAPOLIS (AP) — Indiana Sen. Mike Braun said Wednesday that the long list of possible 2024 Republican candidates for governor won’t sway his decision on whether to enter that race.

Braun has talked openly for months about the possibility of trying to replace Republican Gov. Eric Holcomb, who can’t seek reelection because of term limits, rather than running again for the U.S. Senate seat he won in 2018. The two elections will take place at the same time.

Braun said Wednesday at the Capital that he expects to make his decision before the end of the year.

“I took on two sitting congressman and beat a sitting senator,” Braun said of his 2018 campaign. “I don’t care who it is, if I decide to run I’ll run a campaign similar to what I did back then.”

Braun, the wealthy 68-year-old founder of a national auto parts distribution business, campaigned as a strong supporter of then-President Donald Trump and has often aligned himself closely with U.S. Senate Republicans’ most conservative members while bemoaning the Senate’s deliberative pace. He supported Wednesday’s failed attempt by Florida Sen. Rick Scott to unseat Senate Republican leader Mitch McConnell, saying in a statement that “Hoosier conservative Republicans are sick and tired of the status quo.”

He split from fellow Indiana GOP Sen. Todd Young, who won reelection this month, by voting against advancing a bill protecting same-sex and interracial marriages across the country. Braun earlier this year said he misunderstood the question when he told reporters that the U.S. Supreme Court was wrong to legalize interracial marriage nationwide in 1967.

Indiana Democratic chairman Mike Schmuhl criticized Braun's marriage bill vote for siding with “his party’s extremist wing” against legislation “that’s business-friendly and would create a better future for everyone in the Hoosier State.”

Braun would be heavily favored to win a second Senate term from Republican-dominated Indiana but the open governor’s seat has many possible candidates.

Lt. Gov. Suzanne Crouch, who was Holcomb’s 2016 and 2020 running mate, has raised more than $2 million for an unannounced campaign, as has Fort Wayne businessman Eric Doden since he kicked off a campaign last year.

Republican U.S. Rep. Trey Hollingsworth alluded to a possible run for other political offices when he announced in January that he wouldn’t seek reelection — and some Republicans are hoping that former Gov. Mitch Daniels will seek a Statehouse return after he steps down as Purdue University’s president at the end of December.

Braun fueled his successful 2018 Senate campaign with more than $11 million in personal loans, vaulting from a little-known businessman to wining the Republican primary over then-Reps. Luke Messer and Todd Rokita, then unseating Democratic Sen. Joe Donnelly.

Hollingsworth, the son of a wealthy commercial and industrial property developer from Tennessee, spent millions of his own money to win his congressional seat in 2016.

But Braun said Wednesday he wouldn’t spend his own money on a run for governor.

“No, that was a necessity in the primary and that shouldn’t be an issue this time,” Braun said.

Discussions of possible 2024 statewide Democratic candidates have centered on Donnelly, who is now President Joe Biden’s ambassador to the Vatican, and former state schools superintendent Jennifer McCormick, who won election as a Republican in 2016 but has since switched parties after disputes with Republican Statehouse leaders over education policies.