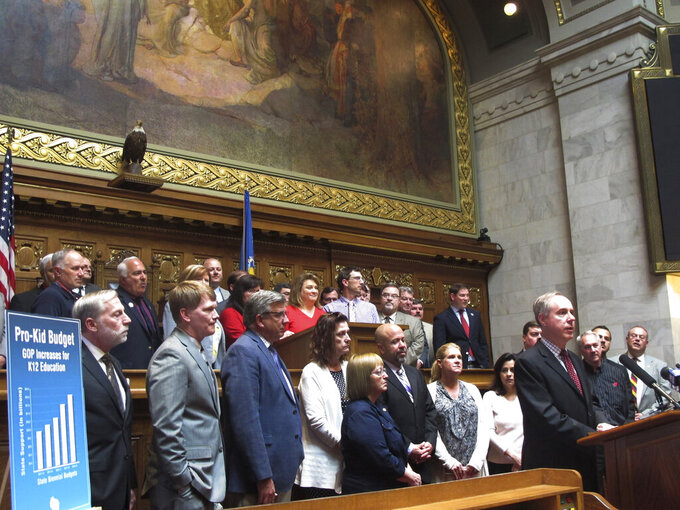 Scott Bauer, ASSOCIATED PRESS
FILE - In this May 22, 2019, file photo, Wisconsin Assembly Speaker Robin Vos, standing at podium, surrounded by fellow Republican lawmakers, speaks at the Capitol in Madison, Wis. Wisconsin lawmakers are poised to take their first votes on police reform measures since George Floyd died last year. The state Senate is set to vote Tuesday, May 11, 2021, on five bipartisan bills. More divisive proposals, like banning the use of chokeholds, remain in the works.(AP Photo/Scott Bauer File)

The Senate is widely expected to pass a bipartisan package Tuesday and send it to the Assembly for consideration. The bills mostly deal with administrative changes and data gathering, not use-of-force policies.

Although more contentious proposals are still in the works, including restrictions on chokeholds and the establishment of a statewide use-of-force policy, Tuesday's vote will represent the first signs of movement in Wisconsin after GOP lawmakers ignored Democratic Gov. Tony Evers' calls for special sessions on police reform following Floyd's death last May in Minneapolis and again following the August police shooting of another Black man, Jacob Blake, by a white Kenosha police officer.

“This doesn't solve every problem, but I think that this really shows that there is transparency and areas where we can make that a little bit better and collect a little more information,” Republican Sen. Van Wanggaard, a former police officer who co-sponsored the measures, said during a joint Milwaukee Press Club-WisPolitics.com virtual luncheon discussion Tuesday. “It's better for everyone to be able to see that."

The legislation includes proposals that would create a $600,000 grant program for community-based policing in large cities; require police to post use of force policies online; require the state Department of Justice to gather more data on use of force incidents and produce an annual report; require police to maintain and share personnel files with other agencies during the hiring process; and require Milwaukee and Madison's police and firefighter oversight commissions to add union nominees.

Pressure to overhaul police practices has been mounting across the country since Floyd's death. A white former Minneapolis police officer, Derek Chauvin, was convicted of murder last month for killing Floyd.

The Kenosha police shooting of Blake, who was left paralyzed, put the spotlight on Wisconsin. Although Evers called special sessions after each incident, Republican leaders refused to convene the Legislature.

The task force also has recommended a statewide prohibition on officers using chokeholds except in life-threatening situations or in self-defense and the creation of an independent use-of-force review board to research incidents and develop best practices.

Wanggaard and Democratic Sen. Lena Taylor are working together on legislation to implement those ideas. The Senate Judiciary and Public Safety Committee, which Wanggaard chairs, passed a bill Thursday that would ban chokeholds except in life-threatening situations. Opponents say the move would give officers an excuse to continue using chokeholds.

During the luncheon, Wanggaard said an officer would still have to explain why a chokehold was necessary. Taylor acknowledged that a bad officer could escape discipline using the self-defense exception, but “I wasn't going to let the perfect get in the way of the good. I can't change that people would lie.”