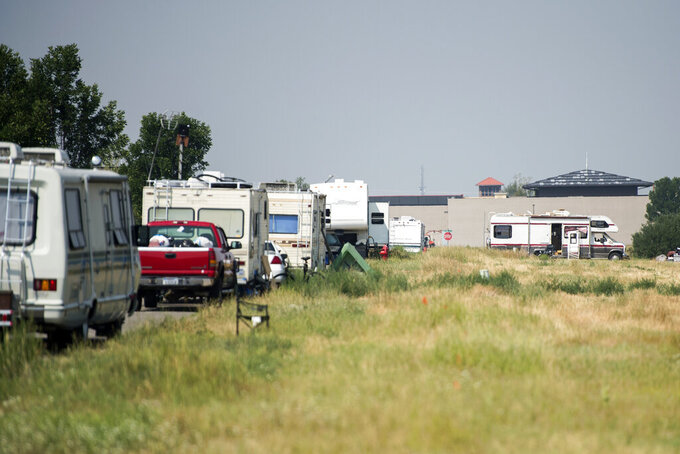 Rachel Leathe, ASSOCIATED PRESS
A row of RV's are parked along Patrick Street on Friday, July 30, 2021, in Bozeman, Mont. The tight market has pushed some in the city to give up living in a stationary home and become full-time residents of their RVs, campers or trailers. Small cities of all varieties of motor homes have popped up in local campgrounds, big-box store parking lots and side streets. (Rachel Leathe/Bozeman Daily Chronicle via AP)

BOZEMAN, Mont. (AP) — Finding a place to live in Gallatin County is a fraught task.

New rentals are few and far between. Homes for sale seem even fewer and farther with skyrocketing demand and a diminishing housing supply.

The market has pushed some, and pulled others, to give up living in a stationary home — at least for a while — in exchange for becoming full-time residents of their RVs, campers or trailers.

As a result, small cities of all varieties of motor homes have popped up in local campgrounds, big-box store parking lots and side streets.

It’s a result of the pandemic and is new to Bozeman, but the city’s not alone. There’s been a rise in people living in vehicles across the country, Human Resources Development Council CEO Heather Grenier told the Bozeman Daily Chronicle.

But in a county where rent is spiking by hundreds of dollars a month for some and the median price of single-family homes doubled in the last year, it’s another sign of a worsening housing crisis.

“It really was just a direct correlation to the housing market … so many people were displaced as a result of COVID, people sold their homes that were long-term rentals, people switched to VRBO rather than long-term rentals because they could,” Grenier said.

“So many people were displaced and we already had a really limited inventory and housing supply, so we weren’t just able to absorb it.”

The rise prompted HRDC to work with the Bozeman Police Department and the Downtown Bozeman Partnership on an outreach program aimed at those living on the streets.

A Bozeman community resources officer goes out with an HRDC staff member to check in with people and offer them any resources they may need, whether that’s some cash to fix something on their vehicle or connecting them to a housing resources navigator.

Although in its infancy, the program is expected to stick around with recognition that Bozeman’s housing woes are here to stay.

In the couple months the outreach program has been in place, HRDC and officers have talked to dozens of people living in vehicles in Bozeman, Knight said.

Some are just passing through on their way to somewhere else. Others were on that path before an unexpected vehicle issue got them stuck in town.

But many are working, longtime Bozeman residents who have been pushed out of their housing.

Brian Guyer, housing director with HRDC, said many of the people they talk to had stable housing for years before a landlord gave them 30-days notice to get out. In Bozeman’s tight housing market with a perilously low vacancy rate, a month often isn’t enough time for people to find somewhere to land.

Instead, some are moving into their cars, RVs or campers.

“What’s remarkable about it is how unremarkable it is in terms of the people who are experiencing homelessness,” Guyer said. “These are everyday people … really the bulk of people that we’re seeing, who are quote-unquote ‘urban camping,’ they’re working. Most of them are working more than one job.”

Jennifer Zent, who has lived in Bozeman since 2006, found herself in that position last year when her marriage ended. She decided to bide some time by living in a small camper parked at Bear Canyon.

“When we first got into this we were like “Oh, this will be fun,’” Zent said with a laugh.

After spending thousands of dollars on non-refundable application fees for rental units last summer to no avail, Zent is still living in a camper.

Living in her camper wasn’t what Zent expected of her living situation after years of being in steady, reliable housing. But she is planning to stay in her newer, larger fifth-wheel for now. While her now-husband talks about wanting a house, it’s working fine for her.

“He’d rather have a house, but I’m totally OK with it because … everything’s smaller,” Zent said. “You learn what you need a lot and what you want.”

Some are living in their RVs because they want to.

Taking note of what was anticipated — and proving to be — a busy summer tourist season, Steve Hystad and his wife decided to rent their home out on AirBNB for part of the summer.

A friend was selling their camper anyway, so Hystad said they figured it was a good chance to make a little money to help defray the high cost of living in Gallatin County.

Though AirBNB recommended a lower price, they listed their 3-bedroom home right outside city limits for around $350 a night.

Within three hours of posting it, their house was booked for the whole summer.

“It was crazy,” Hystad said. “Our original idea was to just rent out our house for the week or two that were on the Madison River or Yellowstone or just camping .... We decided to just go for it.”

And by the end of the summer, the Hystads will have their camper entirely paid off.

But, the lifestyle does require more logistical planning, Hystad said, and they sometimes miss the reliable comforts of a stationary home. They have to occasionally go to Town Pump to dump the camper’s tanks, and the small fridge doesn’t allow for more than a few days of food storage.

Dealing with the heat is tough, and coordinating who is going into town and when can be difficult.

Perhaps the most vexing challenge is finding a campsite. Hystad said if they don’t get to a new area on a Sunday or Monday, there’s a big chance all the campsites will be taken.

Campgrounds are dealing with a busy summer as tourism rebounds from the pandemic and more locals are staying in their RVs or trailers.

Megan Metzger, a Bear Canyon campground host, said the campground’s month-to-month RV spot rentals, which go for $795 to $995 a month, are booking up quickly. Several of their spots are occupied by people who work in Bozeman, Metzger said, including travel nurses.

Dan Eyer, owner of the VanGoBoon campground off Interstate 90, said they have some long-term residents too, even though their site doesn’t have water or electrical hook-ups.

“From what I’ve heard there’s a real demand out there for just trailer sites for people who are working,” Eyer said.

Difficulties in finding a safe place to park their home is a persistent reality for some.

Zent said when Bear Canyon closed for the season last October, they were desperate to find a spot.

They bounced from parking lot to parking lot, and finally found a woman on Craigslist who said they could stay on her land until May. But a few months later, complaints from neighbors prompted the woman to tell Zent to leave.

It was only through word-of-mouth that Zent was able to find a landowner near Belgrade who rented her a spot for $600 a month.

Others aren’t so lucky, or are unable to pay a monthly rent, resulting in contingents of RVs and campers parked on public streets around Bozeman.

Knight, with Bozeman Police, said they sometimes get complaints about the vehicles.

Though they may ask someone to clean up around their site or move their home if it’s in a no-parking zone, Knight said they try to avoid giving tickets.

“We’re hoping to yield longer-term results as opposed to getting someone who might be parked illegally on a street into the cycle of getting a ticket or into something of a fine that they can’t get out from underneath,” Knight said. “Sometimes that’s the answer, but a lot of times it’s an answer that doesn’t work.”

Partnering with HRDC was an obvious move for the department.

“The long-term goal is to try to find some long-term housing for people. The police department isn’t the complete answer in that, clearly,” Knight said.

Guyer, with HRDC, said they let people know about resources, like free laundry, showers and WiFi at the organization’s day center.

HRDC recently hired someone to focus solely on the outreach program. That staffer will also work on educating downtown business owners about de-escalation and giving them resources they can share if someone struggling with homelessness comes to their doors.

Some people they’ve talked to need mental health or addiction recovery services, Guyer said, but most are working and just need help finding a home.

HRDC’s housing navigators work to educate them about government housing programs they qualify for and how to access them.

But in Bozeman, that’s not always a complete solution.

“The downside of that is it doesn’t matter how great of a program we have, there’s no housing inventory,” Guyer said. “We have people who are being displaced from month-to-month leases, but you also have people who are experiencing homelessness, who are qualifying for housing support, and there just aren’t units available.”