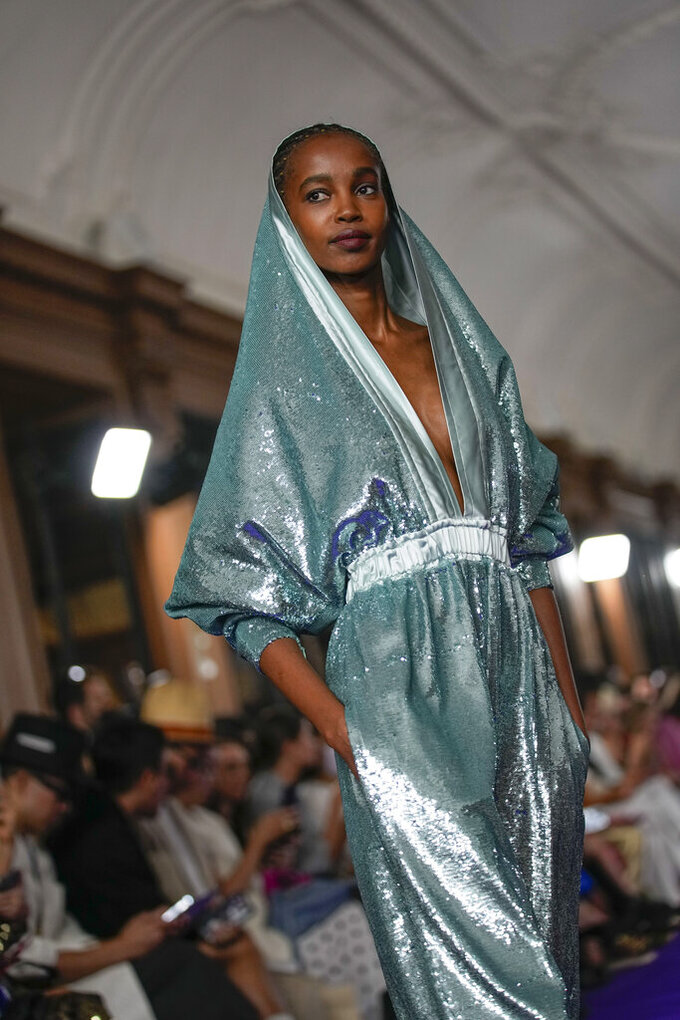 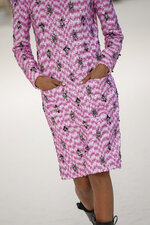 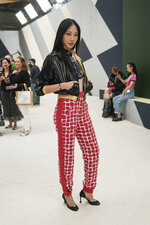 PARIS (AP) — Birds tweeted -- not fashionistas -- the day Chanel brought its couture guests to the calm of the Bois de Boulogne forest.

On Tuesday morning, bleary-eyed VIPs walked across tons of white sand through the Etrier de Paris equestrian center on the leafy outskirts of Paris, past lines of spinning wheels and inflatable capsules as nature, fashion and art mingled.

The dreamscape had been specially made for fall-winter by artist Xavier Veilhan, who had adorned Chanel’s indoor ring venue with a gargantuan silver mobile. It had guests — including Marion Cotillard and Keira Knightley -- gawping.

Here are some highlights of the day’s fall-winter 2022 collections:

With a somewhat incongruous drum rendition via video recording, Chanel ambassador Pharrell Williams rousingly kicked off proceedings before the “real” show began -- to soft music and even softer form.

Gentle colors, lines and shapes, punctuated by moments of dazzling buttons, floaty plumes and large hats was the simple formula for Virginie Viard. The French designer was in a soft mood for couture this season, letting subtle twists do the talking.

A loose pastel green skirt suit opened, lined with minutely sparkling crystalline buttons made by the stalwart’s world-famous atelier. It led on to fastidious embroideries and jacquards on loose coats in speckled mint and sand with often-oversize or upturned collars, laded with an air of the 80s. A-line coats with a weighty swag, dropped waists and statement pockets, meanwhile, introduced subtle tensions — alongside hems and fringing in contrasting patterns.

Yet the best looks were those that kept it minimal. A ribbed olive green gown with a clean strap across the bust flared out at the bottom -- in a clever take on a mermaid dress. It towed a perfect line between sporty and chic.

Yet, there's a niggling feeling that Viard has been playing it safe ever since replacing Karl Lagerfeld, who died in 2019.

It’s got to be couture week when, to blasting horns of annoyed motorists in tangled traffic, paparazzi skid in the sand for a snap of the celebrity roll call.

Keira Knightley, 37, arrived at the far-flung Chanel show amid the most commotion. The actress, who’s been a house ambassador since 21, arrived in a velvet and lace halterneck LBD by Chanel, accessorized with shades and her husband, British musician James Righton.

French designer Alexis Mabille was in top fall form for a timeless collection of couture that never forgot its whimsy.

Draped gowns in luxuriant pastel silks caressed the body, quivering lightly as they were showcased down the dazzling indigo fabric runway.

Flowers were never far from the Mabille design universe -- both literally and figuratively.

A pastel gray silk dress had a central curved split at the knee so that the hem cascaded down in folds like an opening flower. Its top bib was made of intricate white lace like the veins of a petal under a microscope.

Then came flashes of whimsical fashion design -- such as one enormous silken flower headdress made of multitudinous shimmering petals.

Front row fashion insiders are commenting how Paris menswear week — held June 21-26 — felt as equally buzzy as this week’s VIP-filled couture. And unusually so. Couture traditionally outperforms menswear in terms of attention and celebrity presence. But could this be a thing of the past?

From Justin Timberlake to K-pop sensations BTS, the celebrity presence alone of the menswear spring summer 2023 season was enough to rival this week's couture. And that signals higher levels of attention than normal in the glossy press and online.

This change in gear -- or fashion levelling out -- comes as men’s luxury brand portfolio has been outperforming women’s wear in terms of growth more generally with more and more eyeballs on the men’s runway.

Of particular note is the proliferation of U.S. menswear brands, which are now opting to show across the pond in Paris to capitalize on the attention. After the ill-fated New York men’s fashion week -- launched in 2016 and then canceled over a dwindling presence — reports have noted how myriad U.S.-based houses such as Thom Browne, Amiri, Greg Lauren, KidSuper and Rhude have opted to showcase their designs in the City of Light.

A geometric runway cross-pollinated to gentle geometry for Giorgio Armani. This couture season, the Italian fashion legend wanted to “give new space to sparkle and frivolity” inspired by the universe of Art Deco Polish painter Tamara de Lempicka.

On the runway the heyday of the graphic Art Deco movement -- the 1930s -- was evoked through a graphicism in the silhouettes. Art Deco was a movement created in reaction to Art Nouveau, replacing the latter’s undulating shapes with geometry.

A silken gray jacket had the Oriental-feel fashionable at that time with silvery linear trim. Elsewhere, swirls adorned the busts of dark fitted column gowns, while earrings and necklaces came as chunky and graphic.

As ever, Armani showcased his signature statement shoulders, shimmering organzas and satins and lashings of sparkle in the longest collection seen all season. There were in total 92 looks.