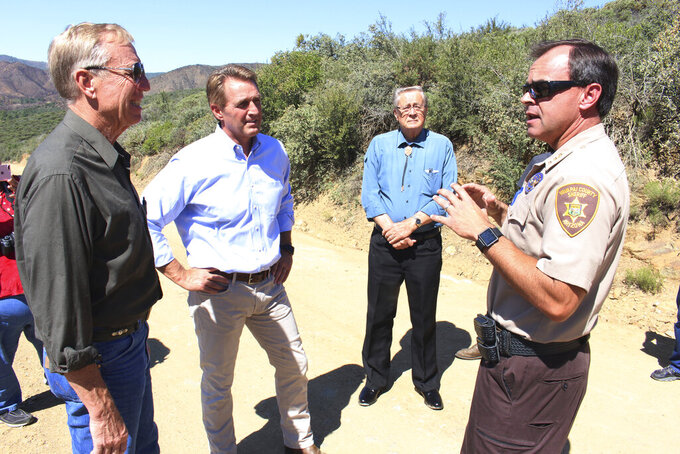 FLAGSTAFF, Ariz. (AP) — Yavapai County Sheriff David Rhodes pleaded guilty on Thursday to operating a boat while under the influence of alcohol and was sentenced to a year of probation and will spend two days in home confinement.

The elected first-term sheriff said he deeply regretted offering to dock a boat for a friend while visiting Lake Powell in August.

“I should have said no and I didn’t, and that's my responsibility," he told a federal magistrate in Flagstaff. “Not accepting responsibility was never an option for me.”

Rhodes also was ordered to pay about $500 in fees, banned from the Glen Canyon National Recreation Area while he's on supervised probation and cannot drink alcohol. He told the judge he already completed a boater safety course and substance abuse treatment that were required under his plea agreement with prosecutors.

Rhodes received two citations — one for operating a boat under the influence and another for operating with a blood-alcohol content of at least 0.08%, the legal limit for driving a vehicle in Arizona. Rhodes registered 0.119% and a 0.113% in a field sobriety test.

Each misdemeanor citation carried a maximum of six months in jail and a $5,000 fine.

Rhodes, a Republican, ran unopposed last year and is accountable only to the public. He cannot be disciplined or fired.

Rhodes said he was drinking with family members and friends at the lake on the Arizona-Utah border and they had designated boat operators who weren't drinking.

When his friend had trouble docking a boat, Rhodes said he tried to coach him and they tried to get someone from the marina to help but were told everyone had gone home for the day.

The friend asked Rhodes to try himself but Rhodes had difficulty operating the boat amid swirling wind, according to a Coconino County Sheriff's Office report.

He made at least three attempts to dock the boat and damaged two other vessels in the process, the report said. It put the damage estimate at more than $2,000. Rhodes, 48, said the repairs were closer to $400 and he's paid for them.

The owners of those boats did not seek restitution through the court.

Rhodes, who has worked for the sheriff's office for 28 years, issued a statement days after he was cited, acknowledging wrongdoing.

His lawyer, Stephen Glazer, said that made it a little difficult to defend Rhodes.

“He makes public statements admitting liability — not necessarily great for his defense — but that's just the way he is wired," Glazer said during the hearing. "A wrong was committed, he's going to accept responsibility and make it right.”

U.S. Magistrate Judge Camille Bibles said she appreciated that Rhodes didn't use his position as sheriff to try to get out of the situation. She said she would look favorably on a request to terminate probation early.

She said she considered his lack of criminal history, cooperation with law enforcement and taking responsibility in accepting the plea agreement.

“That is something I would expect from an individual in your position," she said.