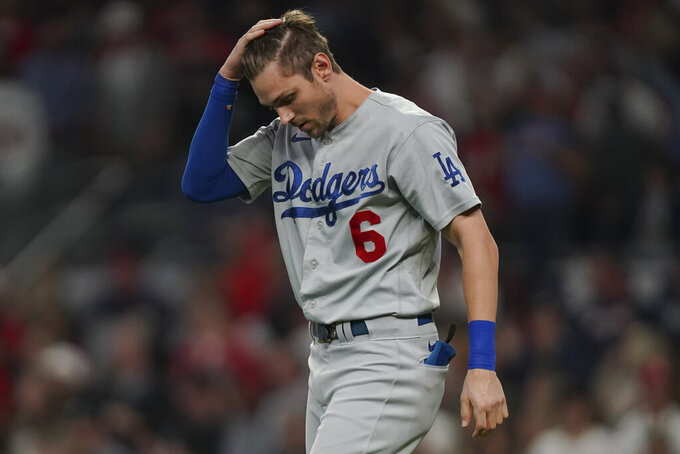 They won’t have a chance to defend their World Series title after losing to the Atlanta Braves in six games in the NL Championship Series. It might have been the last game together for such key veterans as Max Scherzer, Clayton Kershaw, Corey Seager, Kenley Jansen and Chris Taylor, who will become free agents after the World Series.

“You’re saying goodbyes without really knowing,” Seager said. “You want to remember it, remember how it feels and prepare for next year, and you’re uncertain about where it will be.”

However, Seager made it clear he wants to stay in LA.

“Absolutely,” he said. “I grew up here. I’ve spent a lot of time here. I believe in what these guys do and how we go about it. Yeah. Absolutely.”

Taylor blasted three home runs in Game 5 against the Braves with the team on the brink of elimination to force the series back to Atlanta.

“I don’t know what’s going to happen,” he said. “I’ve loved every minute I’ve been a Dodger.”

The potential roster upheaval doesn't end this coming winter, either.

NL batting champion Trea Turner came over from Washington at the July trade deadline and paid immediate dividends. He can become a free agent after the 2022 season. Cody Bellinger, Max Muncy and 20-game winner Julio Urías will follow in 2023. Justin Turner has one year remaining on his contract.

“The six years I’ve been here, it’s been a core group of guys that could be turned over this winter,” manager Dave Roberts said. “I’m not looking forward to it. I wish we could have won another one with this group.”

The Dodgers did win 106 games, beat St. Louis in the NL wild-card game and outlasted the 107-win San Francisco Giants in five games to claim the NL Division Series.

They came into the NLCS without injured Kershaw and Muncy, then lost Turner and Joe Kelly to injury. Scherzer wasn't able to pitch in Game 6 on Saturday night because of a tired arm.

They finished two wins shy of making their fourth World Series appearance in five years, losing to an Atlanta team with 18 fewer wins during the regular season.

“Everybody’s after you. It’s hard to be on top," Mookie Betts said. "Everybody fights to get on top and then it’s a battle to keep everyone away.”

The Dodgers began the season with eight starters and tried to get through the postseason with just Walker Buehler, Scherzer and Urías. The lack of depth was exposed by the team's decisions to use Scherzer in relief in Game 5 of the NLDS and Urías out of the bullpen in Game 2 of the NLCS that left both pitchers tired in their later starts.

“If you could guarantee that we could win Game 5 with someone else, I would have used someone else different,” Roberts said. “There’s a point that you just got to trust the player and I trusted Max.”

The 37-year-old Scherzer had one of his best stretches after joining the team at the trade deadline. He recorded his 3,000th career strikeout in September.

After some mid-season struggles, Jansen came on strong down the stretch, too.

Asked if he wants to return to the team, he said, “It’s not in my hands. I’m thankful to be here for all these years. I’ll always say, whatever happens, I’ll be grateful to the Dodgers.”

“I just felt that we had the players that were active that could still win this series,” Roberts said. “We were ready to play through October. We just didn’t get it done.”