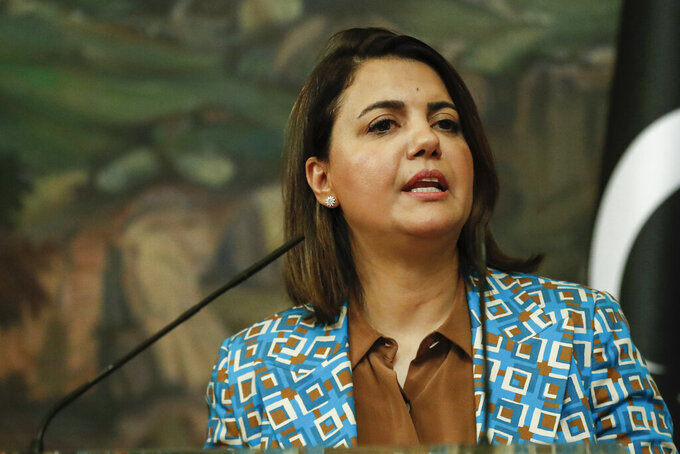 TRIPOLI, Libya (AP) — Libya’s chief diplomat says the transitional government is working to hold long-awaited elections later this year, but security and political and economic stability are necessary for a peaceful transition to a new government.

Foreign Minister Najla Mangoush spoke with The Associated Press late Friday in the capital, Tripoli, a day after the Libyan government hosted a high-level conference aimed at resolving the country’s thorniest issues ahead of elections in December.

“To reach a peaceful transition, attention must be paid to the security and military affairs and to push the wheel of the economy in Libya,” she said.

Libya still faces a number of obstacles before its people can go to the polls, including unresolved issues over the country's elections laws, occasional infighting among armed groups, and the deep rift that remains between the country's east and west, separated for nearly 7 years by civil war.

Hopefuls for the presidential election, slated for Dec. 24, are set to declare their candidacies in the coming days and there are signs that some figures who rose to prominence during the war could take part. Mangoush said she hopes Libyans would accept the results of the vote which, if held, would be the country’s first election since 2014.

Parliamentary elections have been rescheduled by lawmakers for early next year.

Mangoush said the conference Thursday attended by Western, regional and United Nations representatives was a push to implement the withdrawal of mercenaries and foreign forces from the oil-rich country before holding the presidential and parliamentary votes.

“The conference has a great and very deep symbolism for all Libyans,” she said, adding it was “the biggest indication that Libya is recovering.”

Libya has been engulfed in chaos since a NATO-backed uprising toppled longtime dictator Moammar Gadhafi in 2011. He was captured and killed by an armed group two months later. The oil-rich country was for years split between rival governments, one based in the capital, Tripoli, and the other in the eastern part of the country. Each side was backed by different foreign powers and militias.

After months of U.N.-backed negotiations, an interim government was appointed in February to lead the country to elections. As the countdown to the vote begins, differences are re-emerging between Libyan rivals — putting the entire reconciliation process at risk.

In September, Libya’s powerful, east-based commander Khalifa Hifter announced he was suspending his role as leader of a self-styled Libyan army for the next three months — the clearest indication yet that he may be contemplating a run for president in December elections. Should he run, he would be one of the frontrunners but his candidacy would likely stir controversy in western Libya and Tripoli, the stronghold of his opponents, many of them armed groups with varying alliances.

Thousands of mercenaries, foreign fighters and other foreign forces are still in Libya a year after a cease-fire deal included an agreement that they would depart within three months, which hasn't happened.

A 10-member joint military commission with five representatives from each side of the conflict in Libya reached an initial agreement earlier this month on the withdrawal of foreign fighters and mercenaries. The U.N. has also started to deploy monitors to observe the cease-fire.

The U.N. special envoy for Libya, Jan Kubis, warned last month that failure to hold presidential and parliamentary elections on Dec. 24 could renew division and conflict and thwart efforts to unite the oil-rich country.

Mangoush said Libya is marching toward a “peaceful path and safe path,” but she warned that achieving a peaceful transition requires “security, political and economic stability.”

She said the transitional government of Prime Minister Abdul Hamid Dbeibah backs holding a “fair and comprehensive” vote at the end of the year, although “there is diligent and very serious work to be done towards the elections.”

“We are all waiting for it to take place on time, God willing, and that Libyans accept its results,” she said.