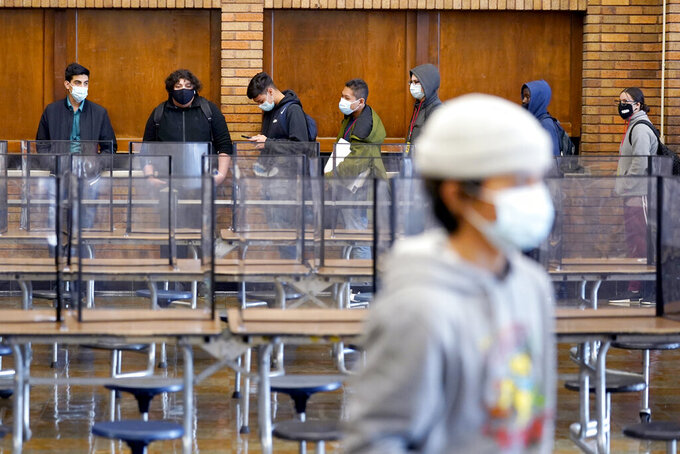 TOPEKA, Kan. (AP) — Gov. Laura Kelly on Wednesday announced that she's imposing a mask mandate for Kansas state government workers and visitors to state buildings in the wake of a “self-inflicted” surge in new COVID-19 cases fueled by the faster-spreading delta variant.

Kelly's announcement came after a central Kansas school district mandated masks in its building and public health officials in two of the state's most populous counties recommended that even vaccinated residents wear masks in at least some indoor public spaces. And all of the developments were in response to the U.S. Centers for Disease Control and Prevention changing its guidance on masks because of the delta variant.

The CDC now recommends that even vaccinated people wear masks indoors in places where the coronavirus is surging, and under its guidelines, those recommendations would apply to 84 of the state's 105 counties.

Kelly's mask mandate would apply to state workers and state buildings in those affected counties, indoors where social distancing isn't possible, and in public spaces such as hallways and bathrooms. Her order takes effect Monday and applies to both vaccinated and unvaccinated people. It covers almost 39,000 government workers, according to legislative researchers.

“We've been brought together mostly through a self-inflected problem,” Kelly said at the start of a Statehouse news conference, blaming the delta variant's spread on people's refusal to get vaccinated.

Confirmed delta variant cases are doubling every two weeks, reaching 1,543 as of Wednesday, according to state data.

“I'm as frustrated as any other vaccinated Kansan,” Kelly said. “I feel like I did my part and one of the rewards of that was not having to wear a mask, but that option has been taken away.”

Some Republicans have criticized the CDC for backing off earlier, looser recommendations on masks. In a tweet, Attorney General Derek Schmidt, a Republican running for governor next year, criticized “conflicting and ever-changing” CDC guidance.

Kelly is not planning to pursue vaccine passports. She tried last year to impose a statewide mask mandate but told reporters Wednesday that she’s not considering a broader one now. She also said she's not considering declaring a new state of emergency.

Her office plans to issue guidance for schools, but Kelly said decisions about what they do with masks and social distancing will be left to the State Board of Education and local school boards.

She hasn't suggested requiring anyone to get vaccinated but said she supports the right of private employers to do what they think is right for their businesses. That comment came after the Ascension Via Christi health system, which operates hospitals and specialty clinics in Wichita, Manhattan, Pittsburg and Wamego, announced that it will require its its staff to get vaccinated.

The Salina district's board of education voted 5-2 during a special Tuesday night meeting to impose its mask requirement. The district, which has about 6,900 students, appears to be the first outside of the Kansas City area to impose a new mask mandate.

“Our goal is having our students in our classrooms, with our teachers, with their peers,” district spokesperson Jennifer Camien said, adding that requiring masks is a “strategy that underscores that goal and better ensures it.”

Shawnee County's health officer on Wednesday recommended that all people wear masks “in crowded indoor situations” and that indoor events be limited to 50% of a room's capacity to allow social distancing. The Lawrence-Douglas County Public Health department on Tuesday began recommending that anyone age 2 or older wear masks in schools and other indoor spaces. The two counties are among the top five in Kansas in population.

The CDC reported that as of Tuesday, 45% of the state's 2.9 million residents were vaccinated, which put Kansas 30th among states and below the national vaccination rate.