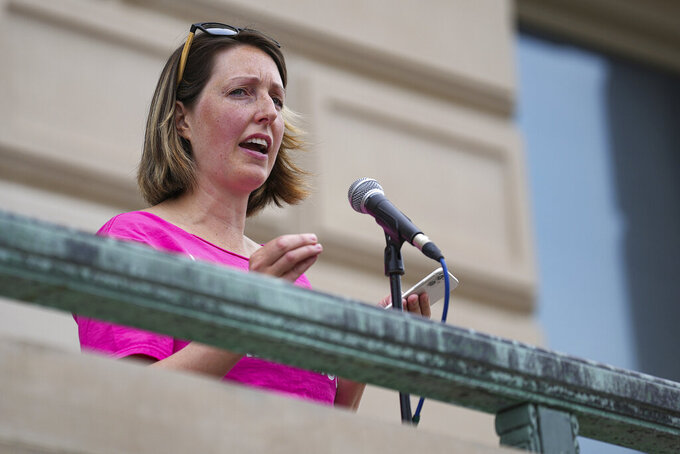 It alleges that Rokita has issued subpoenas seeking the medical records of patients based on complaints from people who have never been a patient of either Bernard or Caldwell and “who lack any personal knowledge of the alleged circumstances giving rise to the complaints."

The suit contends that Rokita has “completely ignored" a state requirement that his office first determine that consumer complaints have “merit" before he can investigate physicians and other licensed professionals and that his conduct “violates numerous Indiana statutes."

“The Attorney General has wholly ignored the General Assembly’s fine-tuned structure for handling consumer complaints regarding licensed professionals and has engaged in precisely the type of overbearing, harassing conduct that the General Assembly sought to prohibit," the suit states.

Bernard received widespread attention after she gave an interview to The Indianapolis Star about the 10-year-old girl, who traveled to Indiana from Ohio for the abortion after a so-called fetal heartbeat law took effect in Ohio in June after the U.S. Supreme Court overturned Roe v. Wade. Such laws ban abortions from the time a fetus’ cardiac activity can be detected, which is typically around the sixth week of pregnancy.

A 27-year-old man was charged in Columbus, Ohio, with raping the girl, confirming the existence of a case that was initially met with skepticism by some news outlets and Republican politicians.

After the news of the 10-year-old’s abortion broke, Rokita told Fox News he would investigate whether Bernard violated child abuse notification or abortion reporting laws. He also said his office would look into whether anything Bernard said to The Indianapolis Star about the girl’s case violated federal medical privacy laws. Rokita offered no specific allegations of wrongdoing.

Records obtained by The Associated Press and local news outlets show Bernard submitted her report about the girl’s abortion July 2, which is within Indiana’s required three-day reporting period for an abortion performed on a girl younger than 16.

Bernard's lawsuit asks a court to issue temporary and permanent injunctions to block Rokita from starting or conducting an investigation of a consumer complaint “without first making an initial determination that the consumer complaint has merit."

It also seeks such injunctions to block him from issuing subpoenas related to an investigation based on a consumer complaint “without first making a valid and proper determination that the consumer complaint has merit," and to prevent Rokita from “violating confidentiality provisions imposed by law."

The suit names as defendants Rokita and Scott Barnhart, the chief counsel of the state attorney general's office and also director of its office of consumer protection.

It alleges that the “improper conduct" by Rokita and Barnhart “threatens patients seeking legal abortions that their most personal and private medical records and health care decisions could be exposed as part of a meritless investigation."

Rokita’s press secretary, Kelly Stevenson, said Thursday in response to a request for comment on the lawsuit that the attorney general’s office investigates “thousands of potential licensing, privacy, and other violations a year.”

“A majority of the complaints we receive are, in fact, from nonpatients. Any investigations that arise as a result of potential violations are handled in a uniform manner and narrowly focused,” she added in a statement.

Bernard's attorney, Kathleen DeLaney, signaled in a July court filing that she planned to sue Rokita. That “tort claim notice” was filed just days after DeLaney sent a cease and desist letter asking Rokita to stop spreading false or misleading information about Bernard.