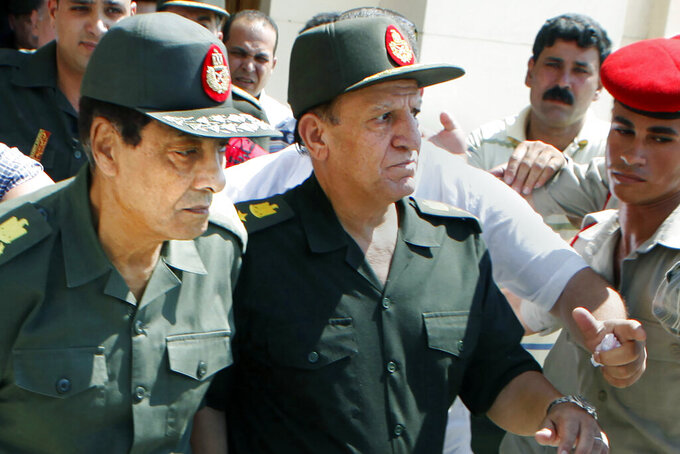 CAIRO (AP) — Hussein Tantawi, the Egyptian general who took charge of the country when longtime autocrat Hosni Mubarak was forced to step down amid the 2011 Arab Spring uprising, died on Tuesday, Egypt’s presidency said. He was 85.

Field Marshal Tantawi, Mubarak’s defense minister for some 20 years, chaired the Supreme Council of the Armed Forces that took power after Mubarak's ouster. He was known to be unquestioningly loyal to the former president, and oversaw a crackdown on pro-democracy protesters that continued under Abdel Fattah el-Sissi, Egypt’s current president. El-Sissi’s government has since rolled back many of the freedoms won in 2011.

Born in October 1935, Tantawi, who suffered from age-related health problems in recent months, died in a hospital in Cairo, according to a person close to his family, who spoke on condition of anonymity because he was not authorized to talk to the media.

His death came 19 months after Mubarak died in a Cairo military hospital in February last year.

Tantawi ran Egypt for 17 months starting from Feb. 11, 2011, when Mubarak stepped down, until the election of Islamist President Mohammed Morsi in June 2012.

After a short honeymoon, relations grew increasingly hostile between the ruling generals and the pro-democracy movement that had led the 18-day uprising against Mubarak.

In one of the most violent incidents, in October 2011, military armored vehicles ran over protesters participating in a sit-in in front of the state television headquarters, killing several beneath their wheels. This marked the beginnings of a fierce campaign to crush dissent, resulting in the death of dozens at the hands of security forces in street skirmishes in the following months and the arrest of hundreds, many of them civil society leaders.

Youth groups that had engineered the uprising against Mubarak accused Tantawi of employing the same violent tactics as his predecessor. Dismay at police brutality was one of the rallying cries of the 2011 uprising. But rather than dismantle the security services, under Tantawi, the military in particular grew in power.

Mistreatment of detainees in government custody continued, many of them arrested on trumped-up charges. More than 10,000 civilians were also sentenced by military tribunals during Tantawi's time in power.

Tanatawi was “a statesman who ran the country in a most difficult period, confronting with wisdom the risks that surrounded Egypt,” the presidency statement said, referring to the period that followed Mubarak’s removal from power.

El-Sissi praised Tanatawi’s running of the country after Mubarak’s ouster. “This period was a very difficult and hard period,” he said in televised comments. “This great man was a true reason for protecting Egypt from fall during this period."

Camp Huckstep, close to Cairo's international airport, had been named after U.S. solider Russell Huckstep who was killed in a plane crash during a trip to Cairo in 1943.

A full-honor military funeral for Tantawi was held at a mosque complex in eastern New Cairo later Tuesday. El-Sissi, along with the country's top military and civilian officials, attended.

Tantawi and the military's supreme council enjoyed lukewarm support from the Muslim Brotherhood, before the standoff between the military and the group reached its height in 2012.

The Muslim Brotherhood, Egypt’s most powerful Islamist group, was long oppressed under Mubarak. The group won the elections held after Mubarak’s fall, considered the first free votes the country had seen. First they gained a majority in parliament, then Morsi squeaked to victory in presidential elections held in 2012, becoming the first civilian to hold the office.

However, a court dissolved the Brotherhood-led parliament, and the generals granted themselves legislative and budgetary authority and control over the process of drafting a new constitution. They also put severe limits on the president’s authority just days before Morsi, who hailed from the Brotherhood, was sworn in as president in June 2012.

Tantawi had a strong military background as an infantry serviceman. He fought in the 1956 Suez Crisis and the 1967 and 1973 Middle East wars against Israel. He became defense minister in 1991, after Mubarak in 1989 removed Field Marshal Abdul-Halim Abu Ghazalah, who was rumored to have been sacked because of his growing popularity.

Mubarak seemed determined not to risk the rise of another powerful military officer who could pose a challenge to his power — and Tantawi fit the role. But he was criticized for failing to adapt his conventional military view to a new era of global terrorism.

“The tactical and operational readiness of the Egyptian Armed Forces has decayed” under Tantawi’s command, according to a 2008 U.S. diplomatic memo leaked by WikiLeaks.

The cable described the top general as “charming and courtly” but “aged and change-resistant.” It said he and Mubarak were focused on maintaining the status-quo above all else, and that they faced criticism from mid-level officers.

“They simply do not have the energy, inclination or world view to do anything differently,” the cable said of Mubarak and Tantawi.

Tantawi is survived by a wife and two sons.