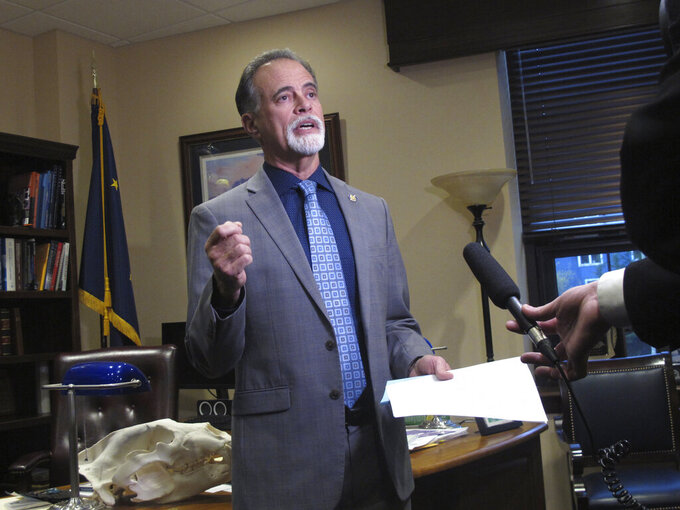 Becky Bohrer, ASSOCIATED PRESS
FILE - Alaska state Senate President Peter Micciche gives an interview in his office at the state Capitol in Juneau, Alaska, on Tuesday, Oct. 12, 2021. Micciche, a Soldotna Republican, announced on Wednesday, May 25, 2022 that he will not seek reelection this year. (AP Photo/Becky Bohrer, File)

His announcement comes after the Legislature last week ended its four-month regular session and a week before a candidate filing deadline.

The Soldotna Republican said he has spent nearly 11 of the last 16 months away from his four daughters and wife, “who need me at home. My family is my priority.” Last year was marked by drawn-out budget fights and four special sessions.

The Division of Elections shows that Micciche had previously filed to run for the seat. Leona Long with the Senate Majority press office said by email that he had filed “months ago and things have changed.”

The division currently shows three other candidates for the Senate seat, including Tuckerman Babcock, a former Republican state party chair.

Micciche was first elected to the Senate in 2012 and has been Senate president since last year. He led a Republican-majority caucus whose members had sharply different views on the annual dividend paid to residents from Alaska's oil-wealth fund.

Senate Minority Leader Tom Begich last week called Micciche a friend. The two spoke to reporters together in Micciche's office on May 19 about their impressions of the legislative session that had just ended.

Begich, an Anchorage Democrat, said working with Micciche had been a “joy and a delight."