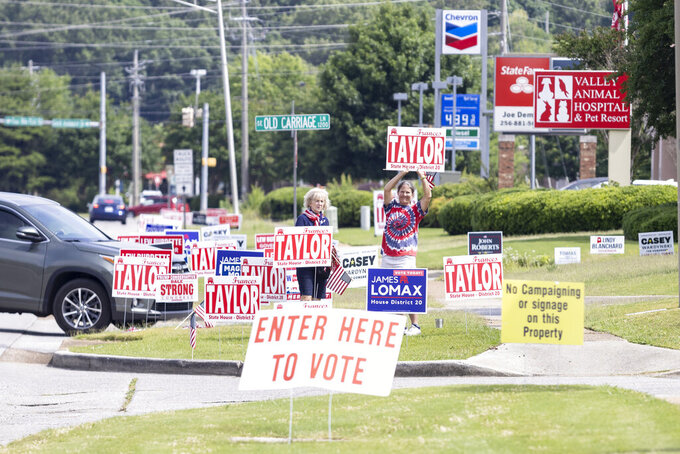 BIRMINGHAM, Ala. (AP) — Gov. Kay Ivey turned back eight primary challengers to win the Republican gubernatorial nomination without a runoff Tuesday after an unexpectedly tough race that pushed a candidate known for folksiness far to the right.

With a comfortable lead over her two closest competitors, Lindy Blanchard and Tim James, Ivey appeared to choke back emotion as she spoke onstage before enthusiastic supporters in Montgomery.

She thanked her opponents, touted her economic record of job creation and low unemployment and promised to keep being President Joe Biden’s “biggest roadblock.”

“I thank you with all my soul. Y’all have been great supporters,” she said. “I am so proud to be your governor.”

Blanchard, who served as an ambassador under former President Donald Trump, finished second and James, the son of former Gov. Fob James who was making his third run for governor, was third. Six more candidates were behind them.

In a state where Republicans already hold every statewide office, Ivey will face the winner of a Democratic primary runoff between Yolanda Flowers and Malika Sanders-Fortier in the November general election.

Ivey, 77, is seeking her second full term after unexpectedly being catapulted to the state’s top office in 2017. After winning comfortably in 2018, Ivey might have expected an easy path to her party’s nomination this year. But that didn’t happen.

Faced with a crowded field, Ivey hammered Biden, emphasized her record and moved to the right in a state where GOP candidates often struggle to out-conservative one another. She repeated Trump’s false claims about election theft and aired a campaign commercial in which she pulled three things out of her purse for a campaign commercial: a lipstick, a cellphone and a revolver.

Blanchard and James slammed Ivey for doing too much to control COVID-19 in a state with one of the nation’s worst pandemic death rates, and James drew national attention by attacking a Birmingham-area charter school that opened under Ivey’s watch to cater to LGBTQ youth.

None of that mattered in the end, with Ivey taking a victory lap and vowing to prevent Democrats from gaining a foothold in the state.

“Tonight the people of Alabama spoke loud and clear in support of our conservative record of results, and it’s a record I’m sure proud of,” she said.

The Democratic runoff will be held on June 21 between Flowers, a career educator from Birmingham, and Sanders-Fortier, a state senator from Selma.

Lieutenant governor at the time, Ivey ascended to the state’s top office when Robert Bentley resigned amid scandal five years ago. She has pushed a plan to construct new lockups to upgrade Alabama’s crowded, dilapidated prisons, which are the subject of a Justice Department lawsuit, and she passed a gasoline tax hike with automatic increases to fund road work.