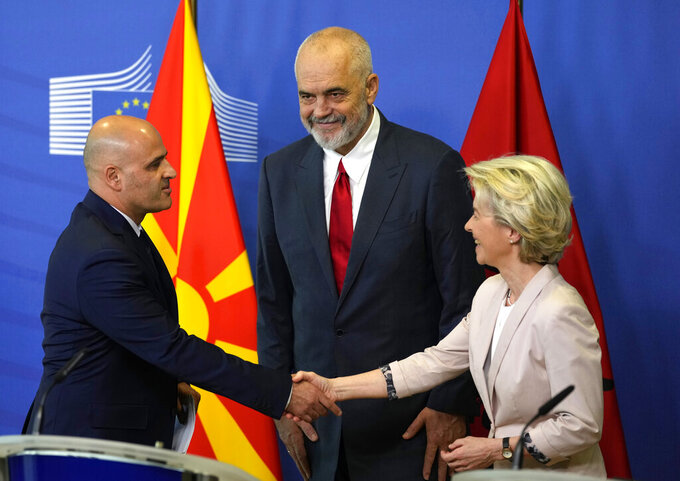 BRUSSELS (AP) — The European Union started membership negotiations with Albania and North Macedonia on Tuesday, a long-delayed step in the Balkan nations' paths toward EU membership that gained momentum amid the war in Ukraine.

Officially, the process kicked off with the presentation of the negotiating frameworks, which allow the bloc's head office to screen how prepared each country is to take on all the EU's laws, rules and regulations.

The move comes at a crucial time for the EU, which in June made Ukraine and neighboring Moldova candidates for membership even though Western Balkan nations were kept waiting in line for a long time. North Macedonia and Albania became EU candidates 19 years ago, but their accession talks never commenced.

Any expansion beyond the 27 current EU members is likely to still be years off. Despite the delay, the Western Balkan nations have maintained their ambition to become part of the world's most important trade bloc and pushed for progress.

Especially for North Macedonia, the past years have been trying. Disputes with Greece and then Bulgaria prevented the country's bid from moving forward because any move by the EU to add new members requires unanimous agreement from existing ones.

It was only last week that the North Macedonian parliament approved an agreement overcoming Bulgaria's objections and cleared the way for the negotiations to start, Bulgaria had held up any progress on the accession talks, accusing North Macedonia’s government of disrespecting shared cultural, linguistic and historic ties.

Kovacevski said he was particularly enthusiastic about promoting his country's language.

“This opens doors for our Macedonian language to become one of the official languages of the European Union, something that I personally see as the greatest achievement, the greatest success,” he said.

U.S. President Joe Biden hailed the launch of Albania and North Macedonia’s accession talks and said Washington would “continue to be a strong and reliable partner as those nations work to defend human rights, strengthen democratic reforms, and uphold the rule of law.”

“In a moment when Russia has shattered peace in Europe, it is more important than ever to support the aspiration for a Europe whole, free, and at peace,” said Biden. “A democratic, secure, and prosperous Western Balkans remains essential to this vision.”

Follow AP's coverage of the Russia-Ukraine war at https://apnews.com/hub/russia-ukraine