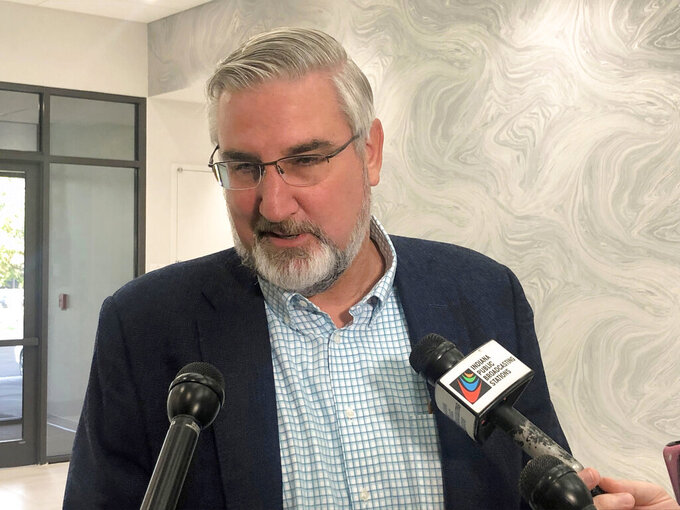 Tom Davies, ASSOCIATED PRESS
Indiana Gov. Eric Holcomb speaks with reporters during the Indiana Technology and Innovation Association conference in Fishers, Ind., on Friday, Oct. 8, 2021. Holcomb said he had not yet decided whether to appeal a court decision against his lawsuit challenging the expanded power state legislators gave themselves to intervene during public health emergencies. (AP Photo/Tom Davies)

While Biden has promised federal vaccination-or-testing regulations for all companies with 100 or more workers, bills are planned by some Indiana legislators who want to join other Republican-led states in trying to prohibit private companies from requiring vaccine shots.

Supporters of that action are already preparing to raise the issue again when the new Indiana legislative session starts in January, even though similar bills failed during the 2021 session.

“I just don’t think that anyone has any right to tell someone else what kind of medicine they’re to take in order to keep their job. That’s just outrageous,” said Republican state Sen. Jim Tomes of Wadesville.

Indiana law generally allows businesses to hire or fire non-union workers for any reason unless it is in violation of anti-discrimination laws covering factors such as age, gender or race. State law also requires K-12 students and those at state residential colleges to get immunized for several diseases, including diphtheria, tetanus, measles, mumps, rubella and meningitis.

Republican Gov. Eric Holcomb has opposed Biden’s proposed federal mandate as a step too far even though he says he wishes “everyone would get the vaccine.”

Holcomb, however, isn’t joining the push to block businesses from adopting their own vaccine requirements.

“I’ve always said that I support and respect those companies that have mandates to make sure that their workforce is operational,” Holcomb said. “Sometimes there are some unintended consequences to that, people walk off the line. But every company that I’ve talked to that has gone down that road has said that we’ve done that risk analysis.”

Indiana Chamber of Commerce President Kevin Brinegar said business vaccine mandates in the state have primarily been limited to hospitals and other health care providers.

“It should be an employer’s decision," Brinegar said. "Whether it’s a presidential mandate or legislators trying to prohibit employers from determining what’s best for their workforce, we’re kind of getting it from both sides.”

Indiana University’s requirement that all students and employees receive COVID-19 vaccine shots unless they receive waivers has so far withstood a court challenge over applying it to students, although it was made less stringent after objections from many Republican legislators. Republican state Attorney General Todd Rokita also opposed IU’s initial vaccine requirement and is among several GOP state attorneys general who’ve threatened lawsuits against Biden’s proposed mandate.

Republican House Speaker Todd Huston expressed reluctance about limiting business decisions on vaccines after a conservative lawmaker unsuccessfully tried last month to insert a ban on such mandates into the bill redrawing the state’s congressional and legislative election districts. He said Republican legislators will talk more about it heading into the 2022 legislative session that starts in January.

“I struggle with that, getting into the private business discussion,” Huston said. “I’m sure that’ll be a discussion in the next couple of months.”

Indiana has lagged behind much of the country in getting COVID-19 vaccine shots, with about 49% of Indiana residents being fully vaccinated against COVID-19, the 14th-lowest rate among the states, according to the Centers for Disease Control and Prevention. The state health department has recorded nearly 16,500 deaths in Indiana involving confirmed or presumed COVID-19 infections over the past 20 months.

Many people, however, see vaccine requirements from either the government or businesses as an infringement upon individual liberty, said Tomes, who represents part of Evansville and nearby rural areas in the state Senate.

“My whole summer has been filled with phone calls and emails from people coming to me, asking me, ‘What is the Legislature going to do about this?’” Tomes said. “These are people that are looking at being terminated because they don’t get vaccinated.”

This story has been corrected to state that vaccine mandate ban bills failed during 2021 legislative session.