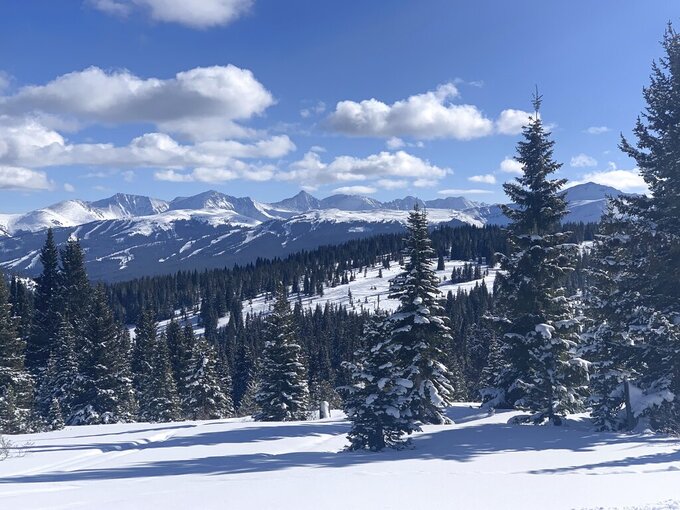 John Meyer, ASSOCIATED PRESS
In this Jan. 1, 2021 photo, the Vail Pass Recreation Area covers 85 square miles of the White River National Forest, in Colorado, offering exceptional skiing, snowshoeing and snowmobiling. The Copper Mountain can be seen, looking southeast., here. Colorado’s ski areas send about $25 million a year in fees to the federal treasury in exchange for being on federal land, and only a small fraction returns to those forests for management. (John Meyer/The Denver Post via AP)

DENVER (AP) — A few years ago, the U.S. Forest Service sat down with Eagle County officials and delivered some bad news: The federal agency was short-staffed and would be closing campgrounds in the mountainous county that includes Vail, where outdoor recreation is king.

Eagle County responded by spending its own tax dollars to pay USFS employees, an unusual arrangement that has become commonplace in Colorado’s high country, where waves of tourists have poured into some of the most-visited forests in the nation.

“It has rubbed some within the community the wrong way because it’s a federal property and they should manage it with federal money,” Eagle County Commissioner Jeanne McQueeney said. “But if that money is not allocated then they manage it by closing. They don’t have the people.”

Colorado’s ski areas send about $25 million a year in fees to the federal treasury in exchange for being on federal land, and only a small fraction returns to those forests for management. That is a frustrating contrast for ski companies that can’t get expansions and upgrades approved in a timely way and for local governments that must maintain the forests or lose their economies’ golden goose.

“Why is that money being generated here and then taken to Washington and thrown into the treasury,” Breckenridge Mayor Eric Mamula said, “instead of being allocated for things that are needed in the forests?”

Coloradans in Congress from both political parties have sought a solution for several years but nothing has made its way to a president’s desk yet. The latest bill has the support of Colorado’s two U.S. senators, as well as Democratic Rep. Joe Neguse and Republican Rep. Lauren Boebert, who together represent all of the high country.

Neguse calls the current arrangement “outrageous,” saying the Forest Service “has been unable or unwilling to invest the necessary resources to do the work they are obligated to do under federal law.”

White River National Forest, which spans nine counties and a dozen ski areas across northwest Colorado, is the most popular forest in the U.S. In 2008, its Eagle-Holy Cross ranger district in Eagle County had seven full-time employees on front country management — permitting, interacting with visitors, maintaining facilities.

A decade later, in 2018, it had one, according to the Northwest Colorado Council of Governments.

“That’s a lot of forest for one guy,” said Jon Stavney, the council’s executive director, “You wouldn’t run a sheriff’s department that way.” His organization sent a letter to Congress in 2018 warning of the shortage and urging action.

Ski areas saw the problem first. For those 122 nationwide that reside on federal land, changes to slopes must be approved by the U.S. Forest Service, which studies their environmental impact. But the years-long delays mean “ski areas are slow to upgrade critical infrastructure,” Alan Henceroth, chief operating officer at Arapahoe Basin, recently told a congressional panel.

By 2018, mountain counties realized the problem was beyond the ski areas: Rangers were tasked with overseeing massive stretches of land, making it difficult for them to put out all the campfires left burning.

Summit County voters created a fund in 2018 that is used for wildfire mitigation and ranger work. Summit and Eagle counties also created front country ranger programs — partnerships between the counties and the forest service to add patrols in the White River National Forest at the expense of county taxpayers.

Since 2019, Eagle County and its towns have spent $387,000 on front country rangers, according to a county spokeswoman. In 2020, when the coronavirus had many people seeking outdoor fun, those rangers extinguished 32 fires and hauled out 5,000 pounds of garbage, along with human and dog waste, abandoned RVs and illegal campsites.

“People come here, want to access our trails and fourteeners, and they’re overrun with people. They need management. The parking needs management. The trails need management. It’s a lot to handle,” McQueeney said. “We’re happy to do it, but we do hear pushback: ‘Is that really our role?’ So far, every year, we’ve managed to say, ‘Yes, it is’ and our constituents are agreeing with us.”

Summit County Commissioner Elisabeth Lawrence calls the unusual arrangement an “insurance policy” for her tourism-dependent county, which includes Breckenridge, “because if some huge wildfire takes out Summit County, the economic impact would be devastating for generations to come.”

Pitkin County also spends money maintaining national forest land and Garfield County pays for staff at Hanging Lake in White River National Forest, according to the Northwest Colorado Council of Governments. Several mayors and county commissioners told The Denver Post they felt their hands were tied; the threat of fires and closed campgrounds forced them to act.

Earlier this month, the Ski Hill Resources for Economic Development Act, or SHRED Act, debuted in Congress. Forests that account for more than $15 million in ski fees — such as White River — could spend 60% of it on staffing, trail improvements and other ranger work. Those that take in less than $15 million per year, including Colorado’s nine other national forests, would keep 75%.

The bill’s odds appear good: It has bipartisan support in both the House, where two Democrats and two Republicans introduced it, as well as in the Senate, where it’s sponsored by Democratic Sen. Michael Bennet of Colorado and Republican Sen. John Barrasso of Wyoming.

The U.S. Department of Agriculture, which oversees the Forest Service, will support the bill with a few technical changes, according to Jennifer Eberlien, associate deputy chief of the National Forest System. And no opposition was voiced during a recent two-hour House hearing.

(The hearing briefly attracted national attention when Texas GOP Rep. Louie Gohmert asked Eberlein whether the forest service can shift the moon’s orbit and the Earth’s orbit to combat climate change. Eberlein said she would have to get back to Gohmert.)

Neguse, who chaired the hearing, expects the bill will be amended sometime this summer before going to the full House for a vote.

When asked why the forest service is underfunded, Neguse said “administration after administration in Washington, on both sides of the aisle, (have been) neglecting the agency.” Because the vast majority of national forests are in the West, “it can be a bit difficult for the appropriators in Washington … to fully appreciate the scope of the need,” he added.

For the high country mayors, commissioners and county managers who have felt required to spend their constituents’ tax dollars maintaining federal forests, the SHRED Act is a welcome alternative to the strange arrangement they’ve put up with for several years.

“In a perfect world, this wouldn’t be happening,” McQueeney said, “and maybe this bill will make it a little more perfect.”