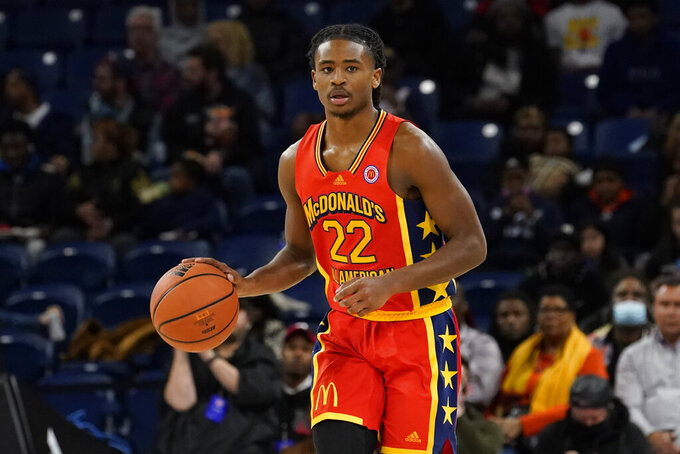 Charles Rex Arbogast, ASSOCIATED PRESS
FILE - West's Cason Wallace participates in the first half of the McDonald's All-American Boys basketball game Tuesday, March 29, 2022, in Chicago. Wallace, a 6-4 guard from Dallas, is the nation’s No. 8 player in his class according to the 247Sports Composite. (AP Photo/Charles Rex Arbogast, File)

While NBA teams are looking ahead to the upcoming draft with much anticipation, that doesn’t necessarily mean the incoming freshman class of college basketball players is any better than usual.

The fact of the matter is that the top 2023 draft prospects aren’t playing college basketball.

That goes for Victor Wembanyama, the 7-foot-4 French phenom who almost certainly will be selected No. 1 overall. The same is true of Scoot Henderson, who plays for the G League Ignite and is generally rated just behind Wembanyama.

“There’s a chance conceivably that a college player might not even get taken in the top five,” said Eric Bossi, the director of basketball for 247Sports.

Even though they might not get taken at the top of next year’s draft, plenty of exciting freshmen are ready to make an impact this season. Duke coach Jon Scheyer is beginning his career with the nation's top-ranked recruiting class according to composite rankings of recruiting sites compiled by 247Sports.

The seventh-ranked Blue Devils signed five of the nation’s top 27 recruits in this class: Dereck Lively (No. 1), Dariq Whitehead (No. 2) and Kyle Filipowski (No. 4), Mark Mitchell (No. 22) and Tyrese Proctor (No. 27). Mitchell scored 15 points and Filipowski and Proctor had seven each Wednesday in the seventh-ranked Blue Devils’ 82-45 exhibition victory over Fayetteville State.

Lively and Whitehead didn’t play in that game as they recover from injuries.

“Dariq definitely won’t play Monday,” Scheyer said, referring to Duke’s regular-season opener against Jacksonville. “He’s still a couple of weeks away. With Dereck, he’s still day-to-day. He’s been really ramping up. I think the big thing for both of those guys is not just being completely healthy, which they’re right there. But you have to build up your game shape again, and we don’t want to put them out too early at all.”

Here’s a look at some freshmen who could have big seasons.

This 6-foot-5 guard is from Chicago but actually played high school basketball at Sierra Canyon in Chatsworth, California. He’s ranked ninth in his class according to the 247Sports Composite. He started and had six points and eight rebounds in UCLA’s exhibition victory over Concordia on Wednesday. “They’ve got two guys that are rock solid they can count on in Tyger Campbell and Jaime Jaquez, but they really need a third guy to step up and be a threat on a nightly basis,” Bossi said. “Bailey’s the right kind of guy.”

Big 12 coaches made their expectations for George clear when they named him the conference’s preseason freshman of the year. The 6-4 guard averaged 22.8 points for Baylor this summer at the GLOBL JAM international tournament. George is from Lewisville, Texas, but played for IMG Academy in Bradenton, Florida. He’s ranked seventh in the 247Sports Composite.

Jackson was regarded as the nation’s No. 1 prospect until he decided to reclassify and enter college a year early. Jackson had been committed to North Carolina until he reclassified and opted to enroll at South Carolina. The 6-9 forward from Ridge View High School in Columbia, South Carolina, is ranked sixth in this class, according to the 247Sports Composite. South Carolina says he’s the highest-ranked prospect ever to sign with the Gamecocks. Jackson was named the MVP of the National Basketball Players Association top-100 camp in July.

Once he’s healthy enough to play, this 7-1 center from Philadelphia should emerge as an immediate force on defense. Scheyer says Lively “is as unique of a big as there is in the country” because of his ability to defend in a variety of ways. “We’ve talked about how to maximize what he can do on the defensive end especially, but that versatility for us is something that we can really use throughout the course of the season,” Scheyer said. Lively played at Westtown School in West Chester, Pennsylvania, which also produced former Duke player and NBA lottery pick Cam Reddish.

Although he hasn’t played a college game yet, Smith earned preseason first-team all-Southeastern Conference honors from the league’s coaches and media. His prep career at North Little Rock (Arkansas) earned him the USA Today national high school player of the year award. The 6-5 guard is ranked third in the 247Sports Composite. “He is a player that kind of moves on the floor effortlessly almost like he is on skates,” Arkansas coach Eric Musselman said. “He is cosmetically pleasing to watch offensively with the way that he can find seams in the defense, and he is a really good shooter as well.”

Wallace, a 6-4 guard from Dallas, is the nation’s No. 8 player in his class according to the 247Sports Composite. He averaged 10.5 points and had a team-high 12 steals in Kentucky’s four-game international exhibition tour this summer. Wallace had nine points and a team-high seven rebounds Sunday in an exhibition victory over Missouri Western State. Kentucky coach John Calipari has praised Wallace’s defense.