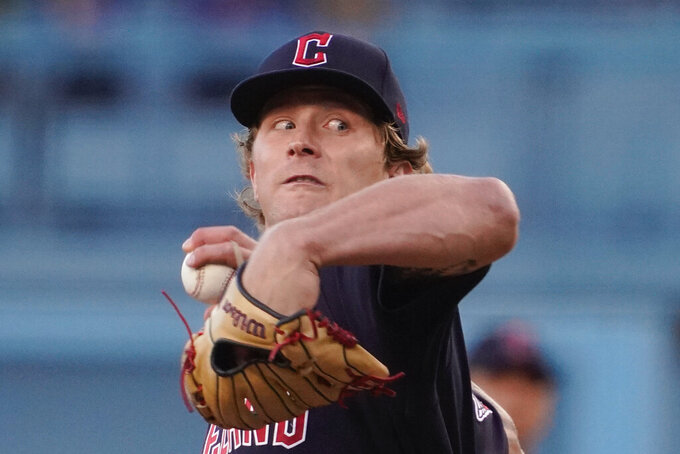 The Guardians had only one hit after the fourth inning and what could have been two potentially-fatal errors, but they also got clutch pitching from their bullpen and a couple of heads up plays on defense for their season-best fifth straight win.

“That was one of the funner games,” Francona said. “It’s good when you win, but I mean we went to guys in situations where we haven’t. I’m really excited for those guys.”

After Anthony Gose escaped a jam in the ninth inning, Richie Palacios hit a tiebreaking sacrifice fly in the 10th to score Owen Miller, who began the inning as the automatic runner.

Zach Plesac had another quality start for Cleveland, allowing one run in six innings, but the bullpen of Sam Hentges, Trevor Stephan, Gose and Enyel De Los Santos shut out the Dodgers over the final four frames.

“Them doing it in this environment is something that they’ll be able to draw off of probably for the rest of their careers. I think it’s that big of a deal, especially with this lineup. So it was pretty cool night,” catcher Luke Maile said.

Andrés Giménez had two hits and José Ramirez hit safely in his ninth straight game, helping Cleveland win despite having just one hit after the fourth inning.

Cody Bellinger homered and Trea Turner had three hits for the Dodgers to extend his hitting streak to 10 games.

Bellinger beat the shift to lead off the ninth with a single to left off Trevor Stephan, then stole second. After Chris Taylor struck out, Bellinger moved to third when Oscar Gonzalez dropped a routine fly ball from Hanser Alberto.

Bellinger was unable to score after Gose struck out Gavin Lux and Gonzalez hauled in a fly ball from Trea Turner.

The Dodgers were 1 for 13 with runners in scoring position and stranded 11 runners.

“I thought the first four innings we had great at-bats, barreled a lot of baseballs and didn’t have anything to show for it. And then after that we just couldn’t string anything together," Dodgers manager Dave Roberts said.

In the 10th, Miller advanced to third on Giménez's infield single, then scored on Palacios' fly to center off Evan Phillips (1-3).

Gose (3-0) struck out Freddie Freeman leading off the bottom of the inning, then Enyel De Los Santos got a groundout from Will Smith, walked Max Muncy and struck out Justin Turner for his first save.

Los Angeles is 0-5 in extra innings while Cleveland improved to 5-2.

Ramirez had a hit in the fourth to extend his hitting streak, but his extra-base hit streak ended at eight games. Ramirez, who is second in the majors with 62 RBIs, is batting 16 for 37 in the past nine games.

Bellinger, who came into the game batting only .152 in June, had two hits. He connected on a fastball from Plesac and drove it halfway up the bleachers in right-center to give the Dodgers a 1-0 lead in the second.

Dodgers ace Clayton Kershaw, making his second start since returning from a back injury, allowed one run and five hits in five innings. The left-hander threw 56 of 81 pitches for strikes, and gave up one walk with four strikeouts.

Kershaw faced some early traffic when the Guardians had runners on first and second with two out in the first, but he struck out Josh Naylor to end it.

Ramirez led off the fourth with an infield single and later scored on Naylor's sacrifice fly.

Plesac went six innings and allowed one run on five hits. The right-hander struck out one and issued two walks. It is the seventh time in 12 starts that Plesac has gone at least six innings.

Plesac was aided by three nice defensive plays. Giménez snagged line drives in the first and second innings to prevent base hits, and Maile covered the bag at third base on a shift when Muncy tried to take an extra base after Bellinger got aboard when Giménez misplayed a grounder in the sixth.

Guardians: OF/DH Franmil Reyes (right hamstring tightness) went 1 for 3 during a rehab appearance for Triple-A Columbus on Friday. He is 5 for 11 with a home run and three RBIs in three games.

Dodgers: CF Mookie Betts was a late scratch from the lineup due to a right rib contusion. Betts collided with Bellinger in the outfield on a fly ball during the first inning of Wednesday night's game against the Los Angeles Angels. ... LHP Andrew Heaney (shoulder) threw a side session before Friday's game and is on track to come off the IL and start the series finale Sunday.

Guardians: RHP Cal Quantrill (4-3, 3.38 ERA) has won his last three starts. He has a 2-0 career record in interleague games.