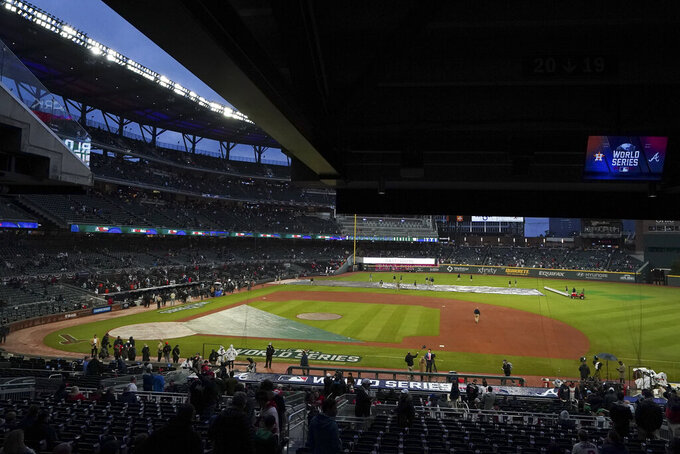 ATLANTA (AP) — Zack Greinke didn't get a decision in the Atlanta Braves’ 3-2 victory Saturday night in Game 4 of the World Series, but he was nonetheless impressive as Houston’s starter, giving up no runs and four hits with no walks and three strikeouts in four innings.

“I started to get tired that last inning a little bit when (Austin) Riley was having a really long at-bat," he said. “So it was probably pretty close to the limit, that’s for sure."

The 38-year-old Greinke, the active leader in the majors with 488 career starts and 219 victories, did not allow the Braves to get a runner in scoring position. He gave up a single in each inning and avoided further trouble.

A career .225 hitter, Greinke even singled in the second inning — possibly his last hit, with the National League potentially adopting the designated hitter next season.

In the first inning, the right-hander struck out Ozzie Albies and got Riley to fly out. He retired Dansby Swanson on a lineout in the second and coaxed Freddie Freeman and Joc Pederson to ground into double plays in the third and fourth.

Greinke battled injuries and spent some time on the injured list with COVID-19 as the regular season was winding down. He lasted just 1 1/3 innings after allowing two runs, one hit and three walks before the Astros rallied to win 9-2 in Game 4 of the AL Championship Series on Oct. 19 in Boston.

He felt fine physically other than normal fatigue.

“It felt better than it has in a while," Greinke said. “Threw some practice innings during some of the off days, so that helped out. Tough game, though."

Greinke was pitching in the Fall Classic for the first time since Game 7 of 2019, when he had held Washington to one hit over his first 6 1/3 innings before Anthony Rendon homered and Juan Soto walked. Greinke was pulled from the game, and the Nationals went on to win and take the title.

Kyle Wright came up big for Atlanta, pitching 4 2/3 innings of relief that included one run and five hits with three walks and three strikeouts.

Wright, the No. 5 overall draft pick out of Vanderbilt in 2017, entered in a tough situation as Braves opener Dylan Lee had loaded the bases in the first and lasted just one-third of an inning.

Enter Wright, who retired Correa on an RBI groundout and struck out Kyle Tucker to strand the runners. Critically, he lasted long enough to save the Braves relievers from getting overworked with another bullpen effort looming for Game 5 on Sunday.

“Kyle is the reason we won the game," Atlanta manager Brian Snitker said. “How he kept that thing in check and allowed us to stay around in that game — that was huge."

Wright spent almost the entire season at Triple-A Gwinnett, going 10-5 with a 3.02 ERA in 24 starts. His two starts with Atlanta didn’t go well, as the right-hander went 0-1 with a 9.95 ERA. He began the night with a 2-8 record and a 6.56 ERA in 14 starts and seven relief appearances in his career with Atlanta.

“He’s been through a lot in a young career, and we’ve created a lot of it, quite honestly, I think," Snitker said. “I thought the best thing — and I think I said this earlier — the best thing was for him to stay in Triple-A all year in mass innings and pitch and be successful."

The Braves added Wright to the World Series roster to replace Jacob Webb. He pitched one inning in a Game 2 loss in Houston.

“I feel like I just try to do my part," Wright said. “I’ve had a lot of ups and downs this year. Just to be able to get back in a position where I could help the team was definitely pretty special.

“My goal was just to get it to the back end, and those guys have been nails all year. Fortunately, I was able to do that, and they shut it down from there."

Jose Altuve homered off Wright in the fourth to give the Astros a 2-0 lead.

Atlanta left fielder Eddie Rosario made a difficult backhanded catch before hitting the left-field wall in the eighth inning to rob Altuve of extra bases.

“I feel right now I am Super Rosario,” he said. “I don’t see the ball. I throw the glove and catch the ball. Everybody’s happy. I’m happy. It’s unbelievable what I did tonight. Wow, what a catch.”

Astros All-Star shortstop Carlos Correa wants to stay in the present and not speculate where he might be playing next season.

Correa is set to become an unrestricted free agent when the World Series ends. The 26-year-old star, in his seventh year with Houston, said before Game 4 that he’s “living in the now” and not worried about where he will be playing next season.

“It’s really special to be here once again with this group of guys,” Correa said. “Like I said before, I don’t take any single second of this year for granted. It’s just special to share the locker room with that group of guys that we have in there. They show up every single day ready to work. They show up every day, and they work like champions. We’re here four wins away to become world champions once again.

“We want to go out there, make it special, and hopefully win it all.”

Correa is one of five Astros named as Gold Glove finalists. Greinke, catcher Martin Maldonado, first baseman Yuli Gurriel and outfielder Kyle Tucker are the others.

Snitker said he was protecting Lee’s sleep when he waited until a few hours before Saturday night’s game to inform the left-hander he would start.

Lee, 27, made only two regular-season appearances, both in relief. His last start came on July 23, 2017 for Class A Greensboro.

Snitker said he knew if he announced the plan on Friday night, Lee would be bombarded with texts and phone calls.

“I didn’t tell him until this afternoon, just for his sake, I think, as much as anything, for what he would have encountered,” Snitker said. “He probably wouldn’t have gotten any sleep because people have been texting him and his phone would have been going off all night.”