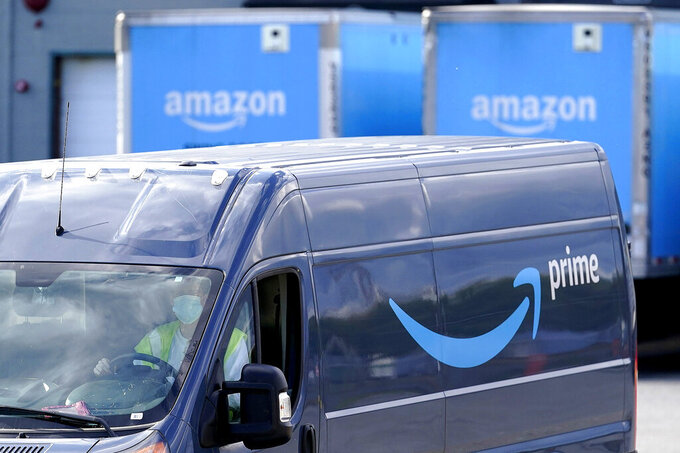 Steven Senne, ASSOCIATED PRESS
FILE - An Amazon Prime logo is seen on the side of a delivery van as it departs an Amazon Warehouse location on Oct. 1, 2020, in Dedham, Mass. Amazon will be offering discounts on a variety of items during its two-day Prime Day shopping event that began Tuesday, July 12, 2022. Consumers are searching for the best deals they can find, including time-sensitive deals that are offered on the site for a short period of time. (AP Photo/Steven Senne, File)

Amazon will be offering discounts on a variety of items during its two-day Prime Day shopping event that began Tuesday.

The Seattle-based ecommerce giant started the sales event in 2015 in response to Singles’ Day, a shopping holiday in China popularized by Chinese e-commerce company Alibaba. Other retailers, including Best Buy and Target, are offering their own online discounts during Prime Day, trying to grab the attention of shoppers looking for deals online.

For Amazon, Prime Day has been a way to get people to sign up for its $139 a year Prime membership, which gets shoppers faster shipping and access to the deals. The company doesn’t disclose total Prime Day sales, though research firm Insider Intelligence suggests sales could climb to about $7.76 billion in the U.S. alone — or 16.8% over last year.

WHAT ARE CONSUMERS LOOKING FOR?

The best deals they can find, including time-sensitive deals that are offered on the site for a short period of time, according to Google search trends.

Data on what customers are directly buying remains limited. But some preliminary information from the data group Numerator shows consumers are purchasing more electronics, a category Amazon tends to emphasize for deals. Electronics were also one of the top purchased categories last year, along with health and beauty items and apparel.

In an analysis of about 4,830 Prime Day orders made by 4 p.m. ET on Tuesday, Numerator found some of the top items sold Tuesday have been Amazon’s Fire TV Sticks, the Echo Dot smart speakers, Cascade Dishwasher Pods and Amazon Basics Trash Bags. Earlier in the day, Insignia Fire TVs and Apple Airpods were listed as some of the most purchased items.

HOW MUCH DO CUSTOMERS TYPICALLY SPEND?

The reason for the decline might be in part because consumers are buying cheaper alternatives for products on the site, said Guru Hariharan, the CEO of CommerceIQ, a software company that helps brands sell online. But analysts also say the event’s shifting dates makes it difficult to draw year-over-year comparisons.

Still, global sales growth have also slowed. Sales for last year’s event grew by 8%, much lower than the 67.9% and 43% spikes in 2019 and 2020 respectively, according to Insider Intelligence. This year, the firm projects global sales growth on Prime Day to bump up to 17% due to a higher level of frugal shopping among consumers and the mid-July timing, which will allow Amazon to pull in more consumers doing back-to-school shopping.

ARE THERE MAJOR DISCOUNTS ON ALL ITEMS?

Not necessarily. According to an analysis from CommerceIQ that tracked an index of discount items that brands sold directly to Amazon, products that were already on sale before Prime Day — excluding electronics -- did not see a significant rise in price cuts on Prime Day. The group's data, which tracked discount levels in 2020 and 2021, showed discount levels for many items hovered around 30% before and after Prime Day.

CommerceIQ said only home and kitchen items saw an increase in discounts during the shopping event. Meanwhile, tools, home improvement and office products actually had lower levels of discounts compared to surrounding days.