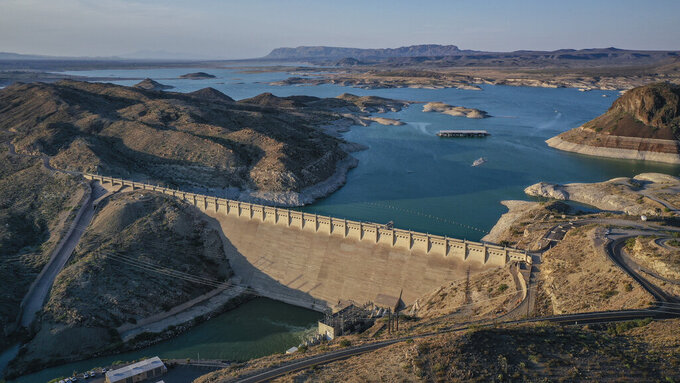 Roberto E. Rosales, ASSOCIATED PRESS
FILE - This undated file photo shows the dam at Elephant Butte Lake in Elephant Butte, N.M. Many New Mexico communities are behind the curve when it comes to investing in drinking water infrastructure as persistent drought threatens supplies, and the state's fragmented funding process makes it hard to know what taxpayers are getting for their money, legislative analysts said Wednesday, June 23, 2021. (Roberto E. Rosales/The Albuquerque Journal via AP, File)

ALBUQUERQUE, N.M. (AP) — Scientists say New Mexico temperatures will likely continue to climb over the next 50 years — a change with major consequences for regional water supplies and landscapes.

Nelia Dunbar, director of the New Mexico Bureau of Geology and Mineral Resources, serves on the eight-member advisory panel crafting a “leap-ahead climate analysis” for the Interstate Stream Commission of what water supplies could look like in 2070.

“The question is not so much will (temperatures) increase, but by how much,” Dunbar said during a recent video update on the state’s long-term water plan.

New Mexico models show that annual average statewide temperatures could rise between 5 and 7 degrees Fahrenheit over the next 50 years, regardless of whether global carbon dioxide emissions rise or fall, the Albuquerque Journal reported.

Experts have been warning state lawmakers and others that a warmer climate could impact nearly every aspect of New Mexico’s water and land.

• Dry vegetation and catastrophic wildfires that could affect runoff and floodplain ecosystems.

• Warmer streams and rivers that could mean changing oxygen levels, which can disturb fish habitat.

“Likely the dominant impact on water quality going forward is going to be related to temperature increase,” Dunbar said.

State law requires that the Office of the State Engineer update a water plan every five years.

The advisory panel compiled climate and water data and projections into an 11-chapter report that is under review by other New Mexico and Arizona scientists.

Dunbar said the “science-based foundation” will help inform the water plan, and should be publicly available by the end of August.

The team found precipitation changes more difficult to predict than temperature, but concluded that New Mexico could see gradual declines in streamflow and snowpack as the state becomes more arid.

Temperature changes may not be uniform across the Land of Enchantment.

New Mexico water planners can learn from tribes, acequia communities and municipalities that have adapted over the past 20 years of drought, said ISC Director Rolf Schmidt-Petersen.

“They’ve experienced lots of disturbance without losing their essential character or becoming something else,” Schmidt-Petersen said.

The ISC estimates the 50-year water plan will be finalized by April 2022.

Water policy proposals will include local, state and federal recommendations.

“This is not a regulatory document, nor is it a water budget for the state,” Schmidt-Petersen said. “It is conveying information about what people should expect for continuing increasing temperatures within New Mexico.”

A $1 million Rio Grande Basin Study by the U.S. Bureau of Reclamation and the Middle Rio Grande Conservancy District will help inform the long-term plan.

Theresa Davis is a Report for America corps member covering water and the environment for the Albuquerque Journal.