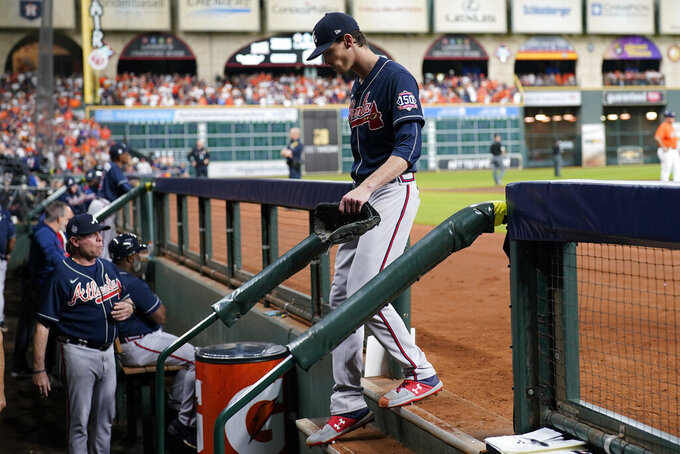 HOUSTON (AP) — Max Fried was pitching like the lefty ace he has been most of this season for the Atlanta Braves, retiring 10 batters in a row in his first World Series start.

The only problem was that it came after a horrendous four-run second inning that put the Houston Astros ahead to stay, and sent Fried to his second consecutive loss at a time when the Braves really need him the most.

Overall, it was another postseason dud for Fried.

“Obviously, I’m not happy about it. Playoffs is a big momentum game," Fried said. “You've got to do everything you can to keep the crooked number off the scoreboard.”

With a chance to send Atlanta home with a 2-0 lead in its first World Series since 1999, Fried instead allowed six runs and seven hits while pitching into the sixth inning of a 7-2 loss Wednesday night. He did strike out six with only one walk.

It came six days after Fried gave up five runs and eight hits over 4 2/3 innings in a potential NL Championship Series clincher in Game 5. That instead became an 11-2 loss to the Los Angeles Dodgers and pushed back another two days the Braves clinching the National League pennant.

That was the first time since June 1 that Fried didn't make it past the fifth inning. Now he has losing decisions in consecutive games for only the second time all year — he lost his final two starts in July before a dominating finish to the regular season, and a solid start to these playoffs.

The Braves had won 6-2 in Game 1 on Tuesday night, getting 6 2/3 solid innings from their bullpen after starter Charlie Morton was struck by a comebacker and suffered a broken right fibula. Morton is done for the series.

“That’s terrific for him to be able to get into the sixth there, especially after they were able to score the runs they did,” catcher Travis d’Arnaud said of Fried. “It gave our bullpen the rest they needed after yesterday with the bullpen game.”

Astros leadoff hitter Jose Altuve, scuffling with a .178 average this October and coming off his first three-strikeout postseason game in Game 1, started things off against Fried when he scorched a double into the left field corner. Michael Brantley hit a flyball that sent Altuve to third before Alex Bregman scored him with a sacrifice fly.

After d'Arnaud homered on a full-count pitch with two outs in the second to tie the game, Carlos Correa struck out leading off the bottom of the inning. But the last four hitters in Houston's lineup then had consecutive singles — and all of them scored, with help from a throwing error by left fielder Eddie Rosario and a wild pitch by Fried.

Manager Brian Snitker said he was still having a hard time convincing himself that Fried actually struggled.

"The first inning, they did some really good hitting. The second inning, when they scored, it was kind of a weird inning, you know what I mean,” Snitker said. “It wasn’t like he was getting banged around. Balls that found holes, checked swings, we threw a ball away. It was just a weird inning. But I thought his stuff was really good.”

Kyle Tucker, Yuli Gurriel, rookie José Siri and Martin Maldonado had the four consecutive singles. Siri drove in the first run with an infield hit and Maldonado got an RBI on his hit to left, with Siri then scoring the second run after Rosario threw toward an unoccupied third base for an error. Fried then had a wild pitch before Brantley’s sharp RBI single.

Fried finally got out of the inning on Bregman's grounder to third, and the pitcher didn't allow another runner until walking Yordan Alvarez leading off the sixth. The Braves starter was then gone after Correa singled.

Fellow left-hander Dylan Lee took over on the mound, and a lot happened while he faced his minimum three batters, though the Astros scored only once that inning.

Tucker reached on a fielder’s choice grounder before Gurriel hit a potential double-play grounder to shortstop Dansby Swanson, who made a good throw to Ozzie Albies. But the All-Star second baseman dropped the ball and the runner was called safe, a ruling that stood after a replay challenge by Snitker.

The Astros then had a double steal before Siri struck out, and right-hander Jesse Chavez took over to get Maldonado on an inning-ending popout.