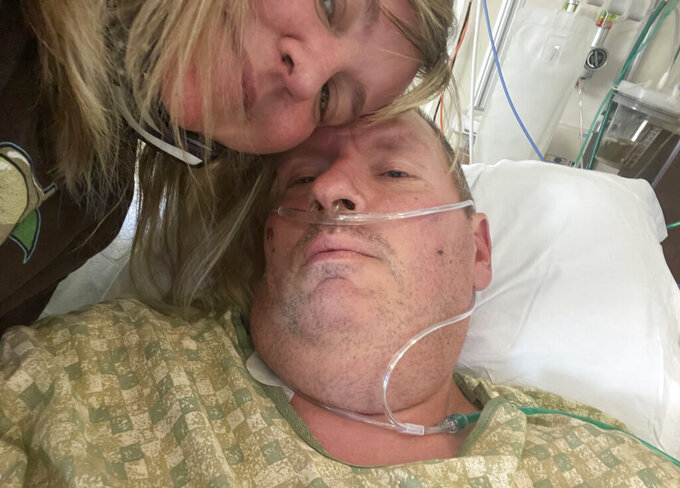 Christina Fisher, ASSOCIATED PRESS
In this photo provided by Christina Fisher, Lincoln County Sheriff's Deputy Ben Fisher and his wife, Christine Fisher, are pictured in mid-Oct. 2021, at the Boise VA Medical Center where he was being treated for COVID-19, in Boise, Idaho. Fisher, who was unvaccinated and lax about wearing a mask outside of work, has changed his mind about the COVID-19 vaccine. He was diagnosed with COVID-19 in late September, spent 40 days bedridden, 17 days intubated and lost 80 pounds. He was transferred to another hospital for rehabilitation on Oct. 22, but not before receiving his first dose of the COVID-19 vaccine. (Christina Fisher via AP) 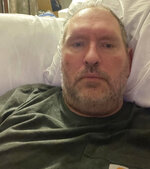 LIBBY, Mont. (AP) — After nearly losing his life to COVID-19, Ben Fisher has changed his mind about getting vaccinated against the virus.

“The only protection we have is the vaccine,” said Fisher from St. Luke’s Boise Medical Center in Idaho on Oct. 27. “This virus will kill you, especially if you catch the wrong variant of it.”

Fisher, a 47-year-old deputy with the Lincoln County Sheriff’s Office, caught the delta variant of the coronavirus in late September. Days after going to a Libby emergency room with low oxygen levels, he was fighting to stay alive on a ventilator at the Boise Veterans Affairs Medical Center in Idaho. The battle left him intubated for 17 days, bed-ridden for 40 days and stripped 80 pounds off his stout 6-foot-4 frame, The Western News reported.

Complicating his coronavirus infection, Fisher suffered from suspected bacterial pneumonia and asbestosis, according to his wife Christina Fisher. During the darkest days of Ben Fisher’s hospitalization, nurses had trouble proning him, or turning him on his stomach to help distribute oxygen throughout his lungs.

Community support galvanized around the Fishers with neighbors offering donations, food and firewood. Dozens turned out for a prayer vigil for the afflicted deputy at Troy Christian Fellowship on Sept. 25.

Born and raised in Troy, Ben Fisher said he had joined his neighbors in rallying around local families in need many times before.

“When you live in a small community like Troy and Libby, that is what you have to do,” he said. “You never think about it being you.”

Against incredible odds, Ben Fisher’s condition was improving by mid-October and managers at the Boise Veterans Affairs Medical Center moved him out of the hospital’s intensive care unit. As Ben Fisher worked to regain his basic motor skills, hospital staff made fewer exceptions to their restrictions on visitation, leaving him to spend long hours alone in the center’s step down unit.

“To not be able to have someone come in is tough, especially when you’re hours away from home,” he said.

Eventually, Christina Fisher finagled her way into the unit and managers later relaxed the hospital’s policies. As Ben Fisher’s strength returned, staff transferred him to Saint Luke’s on Oct. 22.

While in rehab, Ben Fisher learned just how close he had come to death. Doctors who took care of him in the early days of his infection told during visitations that they hadn’t expected him to make it.

Christina Fisher said physicians with the Veterans Affairs Medical Center told her that patients like her husband, who were intubated at the hospital and infected by the delta variant of the virus, had only a 5% chance of survival.

Talking with doctors during rehabilitation also changed Ben Fisher’s stance on vaccines. Initially, he opposed the shots because he worried pharmaceutical producers had rushed the process. Physicians, however, told him that researchers had worked on similar vaccines for years.

While Ben Fisher emphasized that getting vaccinated should be a personal choice, he recognized shots as safe and effective. Before transferring to Saint Luke’s, Ben Fisher received his first vaccine dose and noticed no side effects.

Reflecting on how he reacted to the virus before his hospitalization, Ben Fisher said he might have done things differently if he had known the outcome.

“I wasn’t doing my part. I wasn’t wearing a mask. I wasn’t concerned about it,” he said. “It’s definitely changed my mind now that I’m living with the result.”

Christina Fisher said that her husband wore a mask at work, but they were lax in wearing masks to the grocery store, church or their children's activities.

Before he returns home, Ben Fisher will likely spend between one and three weeks regaining his strength. As of Oct. 27, he was focusing on standing for longer periods and walking. Due to the way COVID-19 affected his nervous system, Ben Fisher said the left side of his body was taking longer to heal.

While he was excited to return to his patrol vehicle after completing his recovery, Ben Fisher said the thought of coming home to his family was what kept him going.

“I am super excited to get back and see my kids,” he said. “That’s what’s making me get up and fight and take that extra step.”