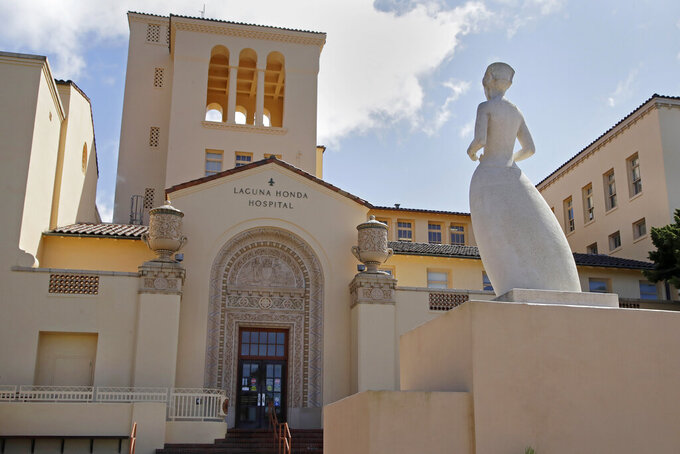 Ben Margot, ASSOCIATED PRESS
FILE - An entrance to Laguna Honda Hospital is seen on March 25, 2020, in San Francisco. A nursing home run by the city of San Francisco will stop discharging patients as part of a federally-mandated closure plan after at least four patients died within days or weeks of being moved from Laguna Honda, an official said. (AP Photo/Ben Margot, File)

SAN FRANCISCO (AP) — A nursing home run by the city of San Francisco will stop discharging patients as part of a federally-mandated closure plan after at least four patients died within days or weeks of being moved from Laguna Honda Hospital, officials said.

In April, the federal Centers for Medicare and Medicaid Services terminated its payments to Laguna Honda after two patients had nonfatal overdoses at the facility in 2021, and inspectors with the California Department of Public Health declared it to be “in a state of substandard care.”

The federal agency, which pays for care for the majority of the nursing home's 700 patients, also ordered the facility to start discharging or transferring its patients ahead of a mid-September mandated closure.

On Thursday, regulators agreed to pause the transfers, San Francisco’s Department of Public Health said in a statement.

San Francisco Department of Public Health is working to get the nursing home recertified ahead of a Sept. 13 closure deadline but it is still required to transfer or discharge all patients according to a closure plan.

The city, supported by San Francisco representatives in Washington, including Sen. Diane Feinstein, asked the federal Medicare and Medicaid agency to pause all transfers from Laguna Honda Hospital, saying it has been a challenge to find places that can care for the patients' complex health care needs.

Until Thursday, Laguna Honda had transferred or discharged 57 patients, including a few to homeless shelters. At least four patients died within days or weeks of being moved from Laguna Honda, the San Francisco Chronicle reported.

The transfers and discharges will be paused “while an assessment occurs over the coming weeks," U.S. Centers for Medicare and Medicaid Services Administrator Chiquita Brooks-LaSure told the newspaper, adding that the agency posted a representative there on Tuesday.

Founded in 1866, the sprawling facility serves people who need long-term care but can’t afford private nursing homes. Many of the patients have dementia, drug addiction and other complex medical needs.

“Laguna Honda has served San Francisco’s most vulnerable residents for 150 years and we plan to do so for another 150 years,” Roland Pickens, Laguna Honda’s interim CEO, said in a statement.

Sen. Diane Feinstein in May called on Health and Human Services Secretary Xavier Becerra to reverse the federal agency's decision to terminate Laguna Honda Hospital’s participation in Medicare and Medicaid programs and force the relocation of its vulnerable patients.

Feinstein said Friday that the hospital provides services for many patients who have no other options and that she hopes the federal agency works with the city of San Francisco to make the necessary improvements at the hospital so it can rejoin the Medicare and Medicaid programs.

“If (Centers for Medicare and Medicaid Services) does not reverse its decision, these patients would again be put at risk as they’re transferred to other facilities," she said in a statement. “This is particularly concerning after some patients were reportedly sent to homeless shelters ill-equipped to provide the necessary medical services.”

Pickens wrote in a letter to patients and their families that it’s not clear how long the transferring and discharging of patients will be suspended.

“We know the uncertainty is challenging but we hope this pause provides our community with relief,” he wrote.