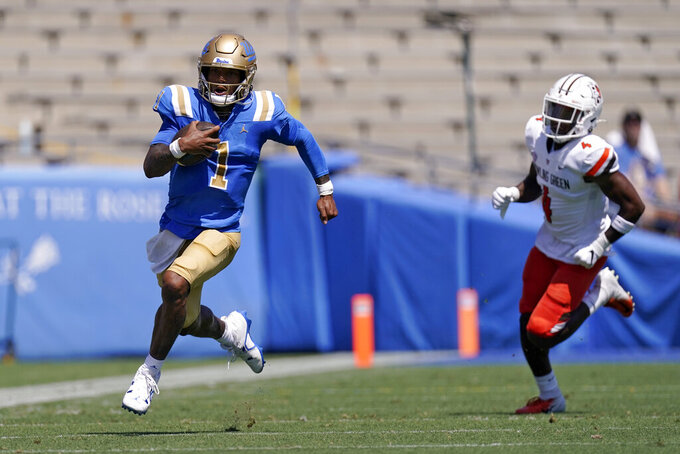 PASADENA, Calif. (AP) — Some players might get flustered falling behind 10 points early in the second quarter, especially as a 24 1/2 point favorite. Not so much when you're a fifth-year senior like Dorian Thompson-Robinson.

Thompson-Robinson bounced back from a rollercoaster start and accounted for 385 yards of total offense and four scores as UCLA rallied for a 45-17 victory over Bowling Green Saturday in the season opener for both teams.

“It's not only me being through this so many times, but a lot of guys on this team,” Thompson-Robinson said. “We have a lot of third, fourth and fifth-year guys that there's a maturity level out there on the field for sure.”

Zach Charbonnet ran for 111 yards and a touchdown for the Bruins, who trailed 17-7 early in the second quarter before scoring 38 straight points to win their opener for the second straight year.

Thompson-Robinson completed 32 of 43 passes for 298 yards and two touchdowns along with rushing for 87 yards and two scores. He supplied an early highlight with a career-long 68-yard TD run during the first quarter to tie the game at seven.

Bowling Green brought a nickel blitz on third-and-3, but Thompson-Robinson escaped pressure from Davon Ferguson in the backfield, scrambled right, went down the sideline and then cut across the field, including escaping another diving tackle attempt from a Falcons defender at the BG 34, before going into the end zone.

“Everybody’s raving about me and my legs. So, you know, just being able to get first downs and touchdowns is the ultimate goal,” Thompson-Robinson said. “They dropped a lot of dudes into coverage and they are really deep in their zone coverages. So just seeing green grass and open space.”

Charbonnet posted his eighth 100-yard rushing game since transferring from Michigan last year. The Bruins rushed for 264 yards, improving to 16-4 when that has happened since Chip Kelly became coach in 2018.

UCLA scored 17 straight points in the second quarter to take a 24-17 lead at halftime. Keegan Jones supplied the go-ahead score when he caught a screen pass from Thompson-Robinson and went 52 yards up the left sideline.

“We talked to our players about responding. I thought they did respond,” Kelly said. “We made some mistakes. And that’s what you have to do. We don’t have preseason games. When you’re in a practice situation and someone makes a mistake you do it again. You don’t get do overs here.”

UCLA had two passing TDs of 50 yards or more for the first time since the 2017 Cactus Bowl against Kansas State. Ethan Garbers connected with Josiah Norwood for a 50-yard pitch and catch in the fourth quarter.

NOT A FUN HOMECOMING

Bowling Green quarterback Matt McDonald, who grew up in Newport Beach, was 17 of 34 for 125 yards. He did give the Falcons a fleeting 17-7 advantage early in the second quarter with a 22-yard touchdown pass to tight end Christian Sims.

“I thought our effort was good. Obviously on defense they played their hearts out. They were in a tough situation considering we didn’t play complimentary football in terms of having a ton of three and outs on offense," Bowling Green coach Scott Loefler said. "We couldn’t run the ball or protect the passer. We need to get that fixed because we have enough guys at skill positions, and we need to get them the ball."

Bowling Green got its first 10 points courtesy of its special teams coming up with big plays. After UCLA went three-and-out on its opening drive, Falcons' running back PaSean Wimberly blocked Nicholas Barr-Mira's punt at the UCLA 11. Charles Rosser picked up the loose ball and returned it for a touchdown to give BG a 7-0 advantage 74 seconds into the game.

It was the first time since 2014 the Falcons have returned a blocked punt for a touchdown,

Later in the first quarter, Patrick Day recovered a muffed punt by UCLA's Jake Bobo at the 11. Four plays later, Mason Lawler made a 24-yard field goal to put the Falcons up 10-7.

Another factor for the low crowd was students don't report to UCLA’s campus until later this month.

Bowling Green: The Falcons were hoping to upset a Power Five team on the road for the second straight year, but were held to 37 yards rushing and averaged only 2.7 yards per offensive play.

UCLA: The new-look defense, which has nine starters and a new coordinator in Bill McGovern, allowed only 47 yards in the 10 drives after the Falcons' second quarter touchdown.