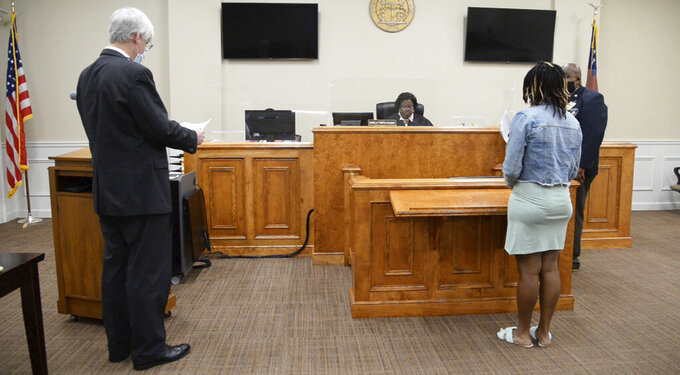 She had a lot in common with many of them. A single Black woman raising her daughter and attending Central Georgia Technical College, Mitchell was there, sitting in the front row, to find out if she would be evicted as well.

The process has taken months, three trips to court, conversations with judges and state agencies and attorneys, the passage and rejection of a CDC eviction moratorium. And just a week ago, Mitchell wasn’t sure if she’d have to pack up everything she owned to find a new place to live.

“It can happen to you,” Mitchell said. “It’s a thin line, that’s what I learned, between being OK and then, in a split-second, everything can be taken from you. It can really just be anybody. It happens to good people.”

The federal government gave Georgia more than $550 million to help people just like Mitchell pay their rent for up to a year. But the state has struggled to distribute the money. Tenants and landlords who have already entered the eviction process have, at best, a strained relationship. And the Georgia Rental Assistance program requires both tenants and landlords to complete an application process in order to access the relief.

“It sucks because it’s two parts of the application, and it requires compliance from both the tenant and the landlord,” Mitchell. “That’s where a lot of people are running into problems. The tenant gets approved, and the landlord doesn’t submit the documents.”

Mitchell’s story is undoubtedly personal and painful, but it’s hardly unique. It’s a common tale in the post-March 2020 United States, the reason Congress sent $46.5 billion to states to keep renters in their homes and apartments and get money to landlords.

Mitchell was working at a Macon department store in spring 2021 — and planning to attend Central Georgia Technical College in the fall — when her hours were sharply cut. She knew she was going to need help making ends meet, so she applied for assistance through the state’s community affairs department, which manages the Georgia Rental Assistance Program.

But then her daughter, Denver, got sick with an upper respiratory infection. It took Denver a while to get better, longer than her store’s week of sick leave.

“(The infection) scared me because it persisted for so long,” Mitchell said. “Denver finally got better, but just not in time for me to keep my job.”

In June, Mitchell’s application for rental assistance was approved. The state just needed documentation from her landlord.

The manager told Mitchell she had sent the maintenance worker to see if Mitchell and her daughter were still in the apartment.

“That stuck out in my mind. Why wouldn’t I still be here?” Mitchell said.

The next day, she got an eviction notice.

Mitchell attends classes from 8:30 a.m. to 3:30 pm. Monday through Thursday at Central Georgia Tech. Her mother watches Denver most days, because Mitchell can’t afford daycare. Mitchell has to be excused from class in order to attend her eviction hearings.

Her first court date was Aug. 16, but her eviction hearing was postponed. On Aug. 30, she returned to court, three days after the CDC’s second eviction moratorium was rejected by the Supreme Court.

She was more prepared, because she’d seen how other people’s cases went.

“It’s just devastating. Your life falls apart in like 20 minutes, and then you’re left to figure out everything. They only give you seven days after you leave court,” Mitchell said. “There’s so much stuff going on. That’s the last thing people need to be thinking about; to be homeless.”

Mitchell submitted proof that she’d been approved for rental assistance to the court, but her landlord hadn’t completed their portion of the application. Her case was postponed again, until Sept. 8.

Finally, progress. The GRA notified her a payment was made. The attorney for her landlord, Brent Marshall, said he wasn’t aware of the payment. They discovered it had been sent to Mitchell’s account instead of to the landlord.

Although Mitchell’s landlord doesn’t legally have to accept the payment, the conversations in court gave Mitchell a sense of hope.

“I feel relieved,” she said. “I feel like that outcome isn’t very common, from what I’ve seen. I feel blessed and humbled.”

Immediately after Mitchell left court, she went to her bank to get the cashier’s check and delivered it to the property manager’s office.

On Sept. 9, Mitchell’s case was dismissed without prejudice, and she received a voicemail from Marshall on Sunday to confirm she didn’t have to return to court Monday.

“Oh my god..., I was like, ‘Yes, it’s finally over,’” Mitchell said about receiving that voicemail.

Mitchell plans to focus on school now that she is able to continue her education, but she still remembers all of the women she saw who were not as lucky.

“I just feel for the other people who haven’t heard of the rental assistance program, or the girls… there’s so many girls that look just like me and are in the same position. They didn’t sign up because they didn’t know or they didn’t have the resources presented to them, so it’s just sad.”