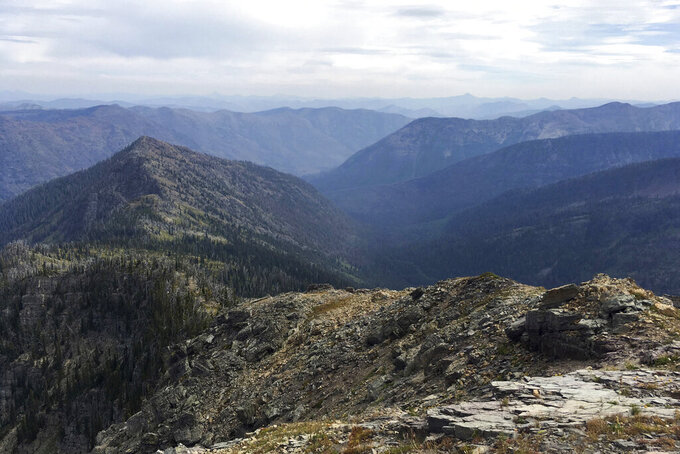 Sam Wilson, ASSOCIATED PRESS
FILE - In this August 2016, file photo, is the view into the Bunker Creek drainage from the Swan Ridge Alpine Trail near Swan Lake, Montana. The U.S. Forest Service has given preliminary approval to a plan for road building, logging and other forest management on Forest Service land in Montana's Swan Valley. The agency says the goal is to reduce wildfire dangers and enhance habitat for federally protected species such as Canada lynx, bull trout and whitebark pine trees. (Sam Wilson/The Daily Inter Lake via AP, File)

KALISPELL, Mont. (AP) — The U.S. Forest Service has given preliminary approval to a plan for road-building, logging and other forest management measures in Montana's Swan Valley with the goal of reducing fire danger and enhancing habitat for several federally protected species, the agency said.

The project area is located on U.S. Forest Service lands on both sides of Montana Highway 83 between the communities of Condon and Swan Lake.

“Species such as Canada lynx, bull trout and whitebark pine face unprecedented risk from climate change, exotic pathogens and all the associated ecological impacts, and failure to act will most likely result in their continued decline,” Flathead National Forest Supervisor Kurt Steele wrote in a draft record of decision published last Friday.

Steele added: “A warming and drier climate, combined with the legacy effects of fire suppression, requires active vegetation management, and the scientific knowledge applied to this decision has been shown to be an effective prescription to mitigate these risks.”

The agency plans to approve about half of its initially proposed 15-year project. Doing so will reduce plans for logging, road building and improvement and the number of acres where trees are to be thinned or burned with fires called prescribed burns that are set on purpose in certain areas to reduce wildfire risks, the Daily Inter Lake reports.

“Some would advocate for less action on this landscape given the uncertainties of future effects of climate change; however, I believe less active management to be irresponsible given the existing and expected future conditions for this landscape,” Steele wrote.

The project area is also home to threatened grizzly bears.

“What we’re trying to do is get something more in alignment with what all of these native species actually need,” said Craig Thompson, a Forest Service wildlife ecologist. “We’re trying to target a more natural mosaic of habitat out there.”

After six or seven years, the Forest Service will reevaluate its plans to decide whether to approve additional work, the agency said.

Keith Hammer, president of the Swan View Coalition conservation group, said the reduced plan is still too large to avoid hurting wildlife in the area and that Canada lynx need large, mature trees for denning and smaller trees for hunting.

“But the Forest Service’s answer is to go out and cut down the big trees so that there’s more little trees next to what big trees they do leave,” he said.

The coalition plans to file an objection to the project before it receives final approval, Hammer said. The Forest Service said the final plan will likely be approved some time this winter.