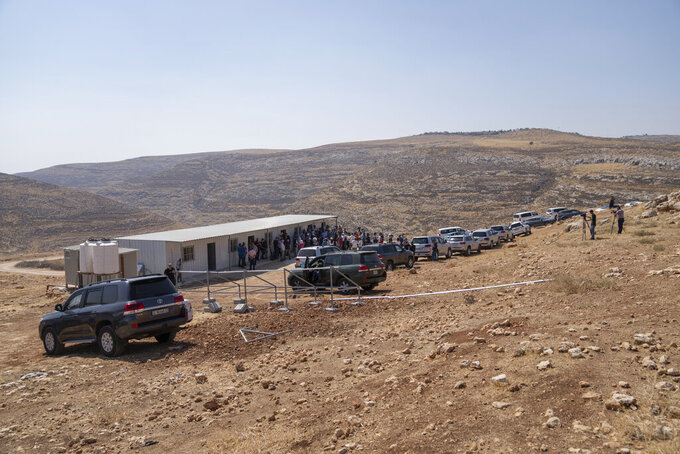 Nasser Nasser, ASSOCIATED PRESS
With Israeli settlement of Kokhav Hashahar in the background, European Union representatives visit a school structure that is under the threat of demolition by the Israeli authorities, in the West Bank Bedouin community of Ein Samia, northeast of Ramallah, Friday, Aug. 12, 2022. The Israeli District Court in Jerusalem issued on Wednesday, Aug. 10, a decision to immediately demolish the Ein Samia school. Fifty four schools serving seven thousand Palestinian children in the West Bank's area "C" are under threat of demolition, Sven Kuhn von Burgsdorff, the European Union's representative to the West Bank and Gaza told reporters. (AP Photo/Nasser Nasser)

KAFR MALIK, West Bank (AP) — European representatives on Friday visited a small schoolhouse serving an impoverished Bedouin community in the occupied West Bank that is under threat of demolition by Israel.

The EU funds such construction in order to help Palestinians maintain their presence in the 60% of the West Bank under full Israeli control, known as Area C, where the military routinely demolishes homes and other structures built without hard-to-obtain permits.

EU Representative Sven Kühn von Burgsdorff, who led the delegation, said it's “entirely unacceptable for the authorities of Israel to destroy this and demolish that.”

“It violates their obligations under international law, notably international rights law, where they have to protect and promote the rights of the children under their responsibility in Palestine to enjoy education services,” he said.

The schoolhouse was built in January and currently serves 17 students. COGAT, the military body responsible for civilian affairs in the West Bank, did not respond to a request for comment.

Area C was demarcated in interim peace agreements signed in the 1990s, which granted the internationally recognized Palestinian Authority limited self-rule in the remainder of the West Bank — scattered enclaves known as Areas A and B.

Earlier this year, Israel's Supreme Court approved the expulsion of some 1,000 Palestinians from Masafer Yatta, a group of Bedouin communities in Area C that are inside a live-fire training area established by the military in the 1980s. Residents say they have been there for decades, practicing traditional agriculture, while Israel says there were no permanent structures at the time the firing range was established.

In a separate development, the Israeli rights group B'Tselem said Friday that Nasser Nawaj’ah, one of its Palestinian field researchers in the southern West Bank, was detained by the military last weekend, blindfolded and handcuffed, and held for 12 hours. B'Tselem said he was told by an interrogator to stop “causing trouble” and “engaging in friction” with the military.

Israel captured the West Bank in the 1967 Mideast war and has built more than 130 settlements there that are home to nearly 500,000 Jewish settlers. Authorities tolerate several additional settlement outposts built without official authorization.

The Palestinians want the West Bank to form the main part of their future state. They and most of the international community view all settlements as a violation of international law and an obstacle to resolving the Israeli-Palestinian conflict.

Right-wing Israeli groups are sharply critical of the EU support for the construction in Area C, accusing it of furthering Palestinian claims to land that Israel officially views as disputed territory. The peace process broke down more than a decade ago.

Khader Kaabna, a member of the Bedouin community where the schoolhouse is set to be demolished, said 28 families comprising some 200 people have lived in the area for four decades.

He said that without the school, children would have to travel 15 kilometers (9 miles) away to another school — which is also threatened with demolition — to get an education, passing near outposts established by hard-line settlers.

“If this schoolhouse is demolished by the occupation, a large number of the students will stop going to school because their parents fear settler attacks,” he said. "The settlers are seeking to uproot this community from the area.”