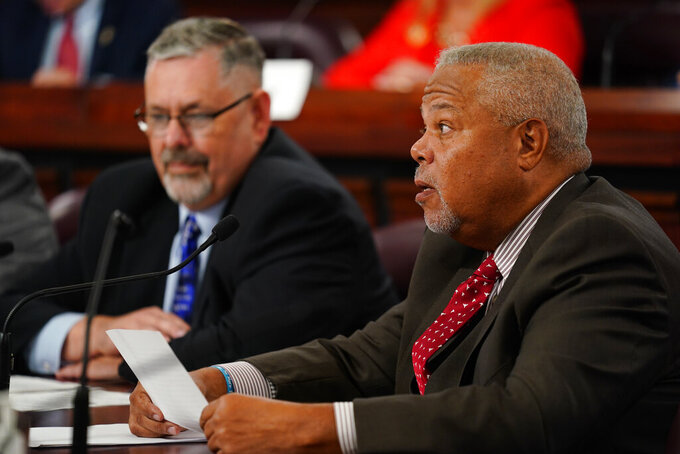 HARRISBURG, Pa. (AP) — Democrats in Pennsylvania's state Senate sued Friday evening in a state court to block a Republican-approved subpoena seeking voter information and to put a stop to what Republicans call a “forensic investigation” of last year’s presidential election.

Democrats had said they would sue within days after the Republican-controlled Senate Intergovernmental Operations Committee voted Wednesday to issue a subpoena.

The subpoena seeks detailed state election records, including communication with counties and the names of who voted in last year’s presidential election, their birth date, address, driver’s license number and the last four digits of their Social Security number.

The subpoena is an outgrowth of former President Donald Trump's baseless claims that he was cheated out of victory last November, and ongoing pressure by Trump and his allies for battleground states where he lost to investigate the election.

“The latest ploy by the Senate Republicans is unprecedented and completely unwarranted," Democrats said in a statement. “All aspects of the certified 2020 election have been thoroughly reviewed and adjudicated in the courts with no findings of irregularities or fraud. The timeframe to contest the 2020 certified election results is long overdue.”

The 53-page lawsuit, filed by all 21 Senate Democrats, contends that the Senate Republican bid to investigate the election illegally treads on the court's duties, violates state law over election audits and seeks information that is barred from public disclosure.

The subpoena was emailed to senior Department of State officials on Thursday, according to a Senate Republican spokesperson.

The majority of the information being requested is already available to the public, according to state Attorney General Josh Shapiro, a Democrat. But Pennsylvania law prohibits the public release of a voter’s driver’s license number and Social Security number.

Republicans have maintained that they are exercising appropriate legislative authority to oversee executive branch functions, and they insist what they call an “investigation” has nothing to do with Trump or overturning the election.

Rather, they say, they are aiming to fix problems discovered in last year's election and improve confidence in elections.

“Hopefully it will accomplish one of two things,” Senate President Pro Tempore Jake Corman, R-Centre, said at Wednesday's committee meeting. “Either it will give us action items to better our laws moving forward for the next election, or we can dispel a lot of concerns about the last election. ... I think both of those are good.”

Democrats say Republicans are simply perpetuating Trump's “big lie” of baseless claims about election fraud that have eroded confidence in elections and are on a path to try to take away voting rights and undermine both democracy and elections.

Meanwhile in Washington on Friday, two Democratic members of Congress — Rep. Zoe Lofgren of California, chairperson of the House Administration Committee, and Rep. Mary Gay Scanlon of Pennsylvania, the committee's vice chair — wrote to a senior U.S. Department of Justice official to request a federal investigation into the subpoena.

In the letter to Kristen Clarke, chief of the department's civil rights division, Lofgren and Scanlon raised concerns that the subpoena for voter information could lead to voter intimidation and violate federal laws.

In Pennsylvania also Friday, legislators introduced a bipartisan bill in the state Senate to try to fix disputed or gray areas of Pennsylvania’s election law. The bill is the product of hearings and a public report last spring.

President Joe Biden beat Trump in Pennsylvania by more than 80,000 votes, according to certified results.

Republicans in Pennsylvania have thus far stopped short of issuing subpoenas for voting machines and ballots from last year's presidential election, as the Arizona Senate GOP did in that state's widely discredited and partisan “audit.”

The lead contractor in Arizona’s review of its election results, Cyber Ninjas, has driver’s license numbers and the last four digits of Society Security numbers for voters in Maricopa County, according to an elections department spokesperson for the county. Arizona’s Republican-led Senate had subpoenaed that information.

But the quest in Pennsylvania by Senate Republicans for the driver's license and partial Social Security numbers of 9 million registered voters has fueled accusations that the information could easily be compromised and expose millions to identity theft or worse.

Collecting that information “for political purposes is unjustifiable and a gross misuse of taxpayer resources,” Democrats said in the statement. “The fact that they will not share how that personal information will be stored, used or who will have access to it is astonishing.”

Senate Republicans say they will give the information to a yet-to-be-hired private contractor and that they will develop contractual provisions to make sure the information is kept secure. However, they have not yet provided information about their vetting process and have given no guarantees that the information won't be given to a party attempting to overturn last year’s election.

The chairman of the Intergovernmental Operations Committee, Sen. Cris Dush, R-Jefferson, said the information on voters is necessary to investigate allegations that addresses “that were listed for a voter” were really attached to a building where no one lived.