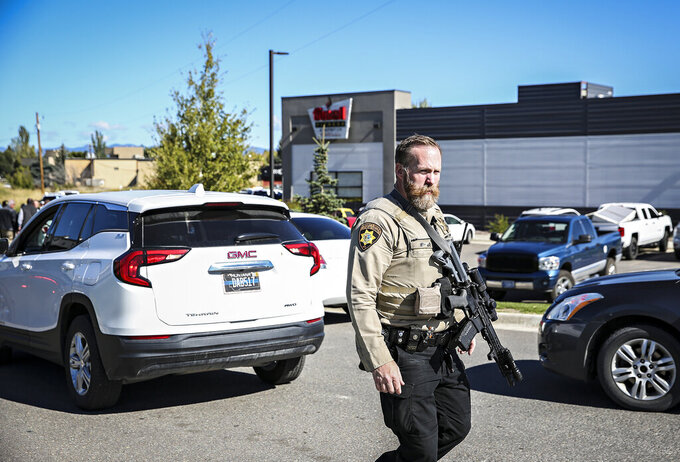 Hunter D'Antuono, ASSOCIATED PRESS
A Flathead County Sheriff responds to the scene of a shooting incident in the parking lot of Fuel Fitness in Kalispell, Mont., Thursday, Sept. 16, 2021. (Hunter D'Antuono/Flathead Beacon via AP)

KALISPELL, Mont. (AP) — A man who had been living in a car in the parking lot of a fitness center in Kalispell for several weeks shot and killed the center's manager after being told he could no longer stay there, the assistant manager said Thursday.

Matt Underhill told the Flathead Beacon that he and the manager of Fuel Fitness confronted the man Thursday morning, refunded his remaining gym membership and told him he needed to leave. The man demanded more money, and when it was denied he said they were “going to die” and began shooting, Underhill told NBC Montana.

As Underhill ran back to the gym, he said he heard several gunshots around him.

Another gym member who saw the confrontation ran to his own vehicle, grabbed a firearm and exchanged fire with the gunman, Underhill said.

A 28-year-old Kalispell man died at the scene, and two others were taken to the hospital, Kalispell police said. The victim's name has not been released.

The gunman was hospitalized in critical condition Thursday afternoon and remained under law enforcement supervision, Kalispell police said. The third man is in stable condition.

Sebastian Henry of Kalispell told the Daily Inter Lake he was walking by the fitness center when he heard two men arguing in the parking lot before one man shot the other. Then a third man came out of the fitness center, and he and the gunman exchanged fire, Henry said.

All the parties involved have been accounted for, police said, and there is no known threat to the public.