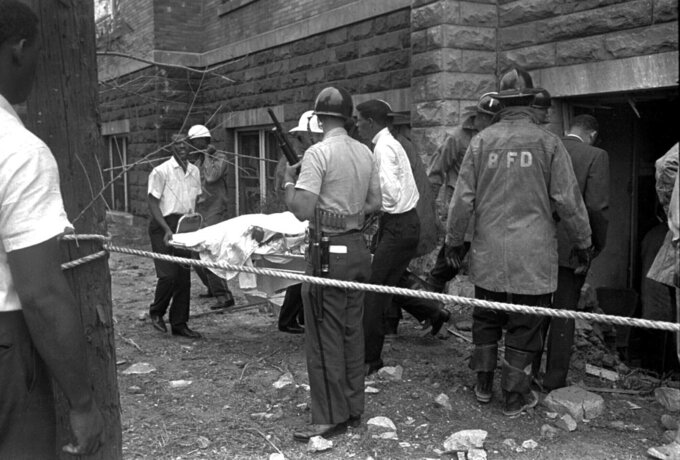 Uncredited, ASSOCIATED PRESS
FILE - Firemen and ambulance attendants remove a covered body from Sixteenth Street Baptist Church, where an explosion ripped the structure during services, killing four black girls, on Sept. 15, 1963. Sarah Collins Rudolph lost an eye and has pieces of glass inside her body from a Ku Klux Klan bombing that killed her sister and three other Black girls inside an Alabama church 59 years ago. (AP Photo, File)

BIRMINGHAM, Ala. (AP) — When an initially blinded, and nearly lifeless, 12-year-old girl found in the rubble of a church bombing was wheeled onto the 10th floor of University Hospital in Birmingham nearly 60 years ago, one of the first people to tend to the child was Rosetta “Rose” Hughes, a nurse.

It was Hughes who stayed with Sarah Collins, the “fifth little girl” in the bombing, until a doctor arrived on that momentous Sunday, as an unforgettable chapter was being etched into the city’s history.

One of the surviving girls was Sarah Collins, sister of Addie Mae. On that Sunday, staff at the emergency clinic at University Hospital received the bodies of the four children killed and tended to scores of others who were injured. Sarah Collins was among the wounded, and one of the first to see her was Hughes.

“When I saw her that Sunday, … she was just covered with soot and ashes (and blood),” Hughes recalled in an exclusive interview with The Birmingham Times. “(It) looked like she was gone. … I thought she wasn’t going to wake up. … She was not moving.”

On Thursday, Birmingham commemorated the explosion that proved to be a turning point in the Civil Rights Movement, became a catalyst for change in the United States, and ultimately prompted global efforts for equality and human rights.

Hughes, who turns 101 in October and still lives in Birmingham, is believed to be one of the last remaining workers on duty at the hospital the day of the bombing.

Last month, for the first time since the bombing, Hughes and Rudolph, now 71, reunited for their first one-on-one, lengthy discussion of the events on that pivotal day in world history.

“It’s more than a blessing to meet her because she took care of me,” Rudolph said during the interview. “When I was younger, I didn’t know how she looked or anything because I was practically blind then. So, just to see her now and know her is a blessing. She’s looking real good.

Hughes recalled working on the 10th floor of University Hospital, which was known as the “Eye” floor, when young Sarah was wheeled in.

“I remember they brought her to the emergency room, and I was working on the Eye floor. We had the surgery up there, and they sent her to eye surgery. … She was on a stretcher, and I took care of her until they called the doctor to come in,” said Hughes, who recalls the doctor’s name only as “Pearson” and that he arrived with a toddler.

Medical staff from across the city were being called in to help with the influx of patients. Many of the doctors were scheduled to be off that weekend, and that likely included Dr. Pearson, who came to the hospital with his son. While Hughes could not remember the doctor’s first name, University of Alabama at Birmingham records show a “Dr. Robert S. Pearson” as a resident in ophthalmology at the facility in the early 1960s.

“It was a Sunday morning, and the doctor’s wife had gone to church, so he was watching the baby and had to bring him (to the hospital). … I babysat while (Dr. Pearson) checked on Sarah,” Hughes recalled.

“(Dr. Pearson) came back out and sent her back downstairs to the where she was examined at first. … They took her back on a stretcher. She was still asleep … and I didn’t have to do anything. I just had to watch her. She was also covered with ashes and smoke.”

Even though she was 12 at the time of the bombing, Collins-Rudolph, still has vivid memories of what happened.

“That’s one day I will never forget,” she said. “I remember, you know, when they operated on my eyes. … I remember when they took the glass out of my eyes, glass from my face. … The doctor had told me there were about 20 to 26 pieces of glass in my face altogether.

“I know when the doctor operated on my eyes, they put this bandage on it. … Maybe about a week later, they took the bandage off. At first, the doctor asked me, ‘What do you see out of your left eye?’ I told him, ‘I just see a little light.’ He asked me the same question (about my right eye). I said, ‘I can’t see anything.’ So, he said I was blinded instantly in my right eye.

“When (the doctor) was talking to my mother, I remember hearing him tell her that eventually I would start seeing out of my left eye because I was real young and the sight would start coming back. When I was getting ready to leave the hospital, I remember (the doctor) telling (my mother) to bring me back in February because they were going to have to remove my right eye, and that’s what they did. I went back in February, and that’s when they removed my right eye and fit me with a prosthetic.”

Sarah has had problems with her eyesight for the past 59 years. She developed glaucoma in her left eye and was initially given drops for the eye.

“That didn’t work too good, and they tried another drop. It didn’t work too good either, so they tried a third drop,” she recalled. “When the drops stopped doing any good, (the doctor) said he would have to operate and give me an incision in that (left) eye. They put an incision in there to drain the fluid. … If he had not done that, I would have gone blind.”

Even today, Rudolph still must visit an eye doctor every six months.

“I had to pay for that out of my own pocket,” she said. “I would always wonder to myself, … ‘I was in that bombing, and I got hurt. How come I had to foot these bills by myself when it wasn’t my fault?’”

While the state apologized to Rudolph two years ago, it hasn't yet honored her request for restitution.

At the reunion with Hughes, husband George Rudolph, who has been at Sarah Rudolph’s side for the past two decades and knows about survival after his first tour of duty as a 19-year-old during the Vietnam War, said his wife has strength he has not seen.

“For my wife to survive what she went through and not hold any animosity toward the KKK because she forgave them, that’s a strong person,” he said. “She didn’t want to hold her hatred in her heart for those Klansmen. When she said, ‘I forgive you,’ that was such a powerful statement. Very powerful. … She is just a strong Black lady and amazing. I love my wife. I thank God for Sarah.”