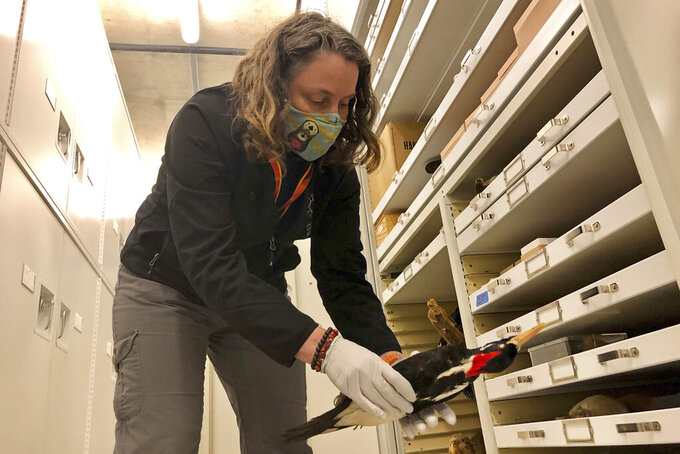 Haven Daley, ASSOCIATED PRESS
FILE - Moe Flannery, senior collections manager for ornithology & mammalogy at the California Academy of Sciences, holds an ivory-billed woodpecker, one of the species in their specimen collection, in San Francisco, on Sept. 24, 2021. The U.S. Fish and Wildlife Service put off a decision about whether ivory-billed woodpeckers are extinct, announcing Wednesday, July 6, 2022, that it's adding six months to review information, including a month of public comment. (AP Photo/Haven Daley, File)

NEW ORLEANS (AP) — The U.S. Fish and Wildlife Service put off a decision about whether ivory-billed woodpeckers are extinct, announcing Wednesday that it's adding six months to review information, including a month of public comment.

“We are aware that there have been surveys or evidence collected recently,” Amy Trahan, the agency's expert on the birds, said Wednesday. “This extra time allows them to submit their evidence to consider.”

The bird, which also has been called the Lord God bird for the astounded exclamations by people who saw one, has or had a 30-inch (76-centimeter) wingspan, a high, nasal call and a distinctive double knock as it pecks for beetles.

It was among 23 animals the agency said in September 2021 it was planning to declare gone from the earth, removing them from the endangered list.

The agency is still reviewing evidence from two public comment periods about the woodpecker, Trahan said.

In the public comment period the agency is looking for photos or videos so clear that they “can be repeatedly interpreted the same way by independent observers.”

Trahan would not comment about what has been submitted or who has made surveys or collected more evidence.

Ornithologist John Fitzpatrick, a former director of the Cornell Lab of Ornithology, said, “Nobody has gotten that cover-of-Time-magazine foldout that everybody wishes they could. But there is still legitimate believable evidence that these birds still exist in remote locations of Louisiana and Arkansas.”

Fitzpatrick, who was lead author of a 2005 study that said the woodpecker had been found in eastern Arkansas, said a non-peer-reviewed paper by respected experts posted on a “preprint” site has some very interesting videos. One shows a group of three large woodpeckers pecking at branches high in a tree.

“The only woodpecker that foraged together in small groups was the ivorybill,” he said.

The Wildlife and Fisheries Service announcement in September opened a 60-day period for public comment, and another comment period was opened with a virtual public meeting about the woodpecker in January.

Only one of nine speakers at that meeting supported the proposal to declare the bird extinct. Fitzpatrick was among experts who said the proposal was premature.

“For a species this iconic, this well-known, I think the right approach for them to take is caution,” he said Wednesday. “And I think that’s what they're doing.”

The other 22 animals are still proposed for removal from the endangered list because of extinction. The agency has a year from the September announcement to take final action and has not yet done so.