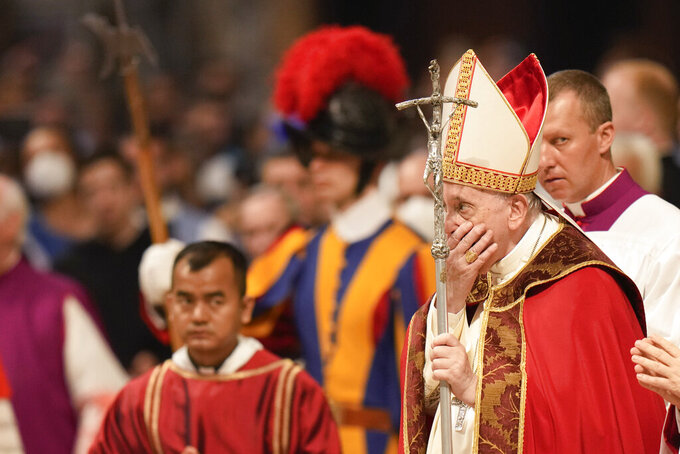 Alessandra Tarantino, ASSOCIATED PRESS
Pope Francis holds the crucifix as he celebrates a Mass on the Solemnity of Saints Peter and Paul, in St. Peter's Basilica at the Vatican, Wednesday, June 29, 2022. (AP Photo/Alessandra Tarantino)

ROME (AP) — Pope Francis urged the Catholic faithful Wednesday to stop exploiting the old Latin Mass for ideological reasons and to start discovering the beauty of the new liturgy that grew from the reforms of the Second Vatican Council.

Francis penned a letter to rank-and-file Catholics as part of his long-term effort to crack down on the spread of the traditional rite and its supporters. He called on the faithful to “abandon our polemics” over the liturgy, which he said risked the very communion and unity of the Catholic Church.

“I don’t see how it is possible to say that one recognizes the validity of the council – though it amazes me that a Catholic might presume not to do so – and at the same time not accept the liturgical reform,” Francis wrote.

The timing of the document's release seemed intentional: It was issued on the Feast of Saints Peter and Paul, an important feast day for the Catholic Church in which the unity of the church, and the communion between its archbishops and the pope, are emphasized.

Francis began his crackdown on the pre-Vatican II Mass in 2021, when he re-imposed restrictions on celebrating the rite that had been loosened by Pope Benedict XVI in 2007. Francis said then that he had to take action because Benedict’s reform had become a source of division in the church and been exploited by Catholics opposed to Vatican II.

Indeed, Catholic traditionalists attached to the old rite, also known as the Tridentine Rite, have become some of the biggest opponents to Francis and his belief that the church should be a “field hospital” that welcomes everyone and where the Eucharist is not a “prize for the perfect” but rather medicine for the weak.

Francis further clamped down on the Latin Mass later in 2021 by forbidding the celebration of some sacraments according to the ancient rite.

In both instances, his directives were aimed at bishops and religious superiors. His letter Wednesday was aimed instead at rank-and-file Catholics and included a call for seminarians and their teachers to embrace the Vatican II reforms and learn the way to celebrate the liturgy according to them.

“We cannot go back to the ritual form which the council fathers ... felt the need to reform,” Francis wrote.

Francis has repeatedly spoken out against traditionalists, decrying their “rigidity” and inward focus, lamenting that their nostalgia for the past was “gagging” the acceptance of Vatican II. Those 1960s meetings modernized the church and led to the Mass being celebrated in the vernacular rather than Latin.

Writing Wednesday, Francis said he imposed the 2021 crackdown “so that the church may lift up, in a variety of so many languages, the one and the same prayer capable of expressing her unity.” He added that “I intend that this unity be reestablished in the whole church of the Roman rite.”

To combat what he has called a tendency toward “restorationism,” Francis has called for the faithful to spend the next two years preparing for the Church’s 2025 Jubilee year by rereading the Vatican II texts and learning more about what led to the reforms in the first place.

At an event Tuesday launching the Jubilee preparations, the Vatican organizer, Archbishop Rino Fisichella, said the aim was to “arouse curiosity in those who have no memory of the event and to help them enter into the essence of the council in order to discover the innovative longing that enabled the church to consciously enter the third millennium of its history.”