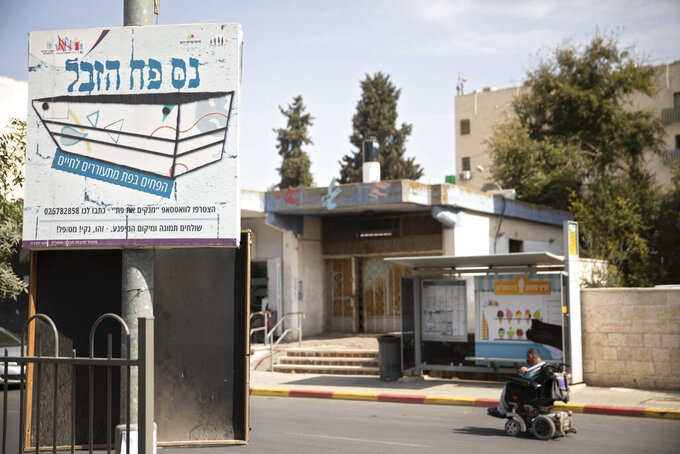 Sebastian Scheiner, ASSOCIATED PRESS
A sign that reads "the trash can miracle" hangs across the street from a trashcan installed at a bus stop that applauds to those who use it, in Jerusalem, Thursday, Oct. 14, 2021. Drop a piece of trash in, and a recording of a child's voice says, "Thank you very much!" (AP Photo/Sebastian Scheiner)

JERUSALEM (AP) — If all you ask is for a simple thanks in return for not littering, this is the trash can for you.

A bin installed next to a bus stop in Jerusalem this week applauds those who use it. Drop a piece of trash in, and a recording of a child's voice says “Thank you very much!”

It's part of an initiative by local residents to clean up the streets in the Pat neighborhood of the city. Jerusalem is known for its world-famous religious sites sacred to Jews, Christians and Muslims. But it’s also a congested modern city of nearly 1 million residents, with the earthly blights of traffic, potholes and litter.

The trash cans, which also have popped up in some European cities, are equipped with solar panels, sensors and a device that expresses appreciation in a variety of voices when anything is dropped in.

“Our neighborhood is dirty and and we want to make a difference,” said Talya Tomer, a local resident and street artist. “We want to have clean, clean streets that look nice and are nice to walk in.”

In keeping with the Jewish Sabbath, a volunteer switches the device off every Friday at sundown.

Similar bins that speak or make funny noises have been deployed in London, Berlin and other cities to discourage littering.

The Jerusalem municipality is offering support for such initiatives in order to improve the appearance of the city.