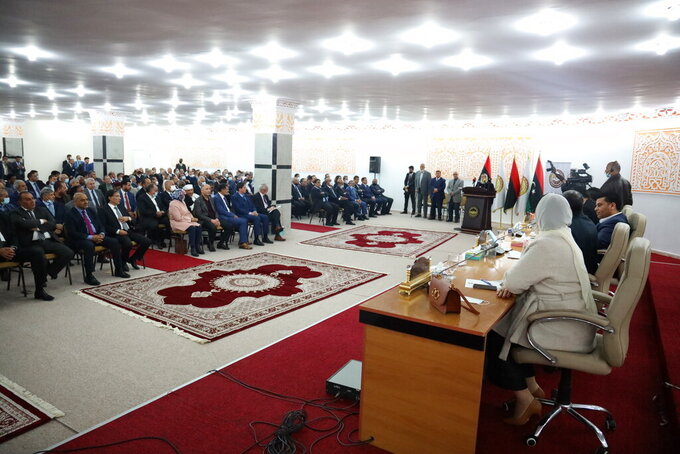 Ahmed Al-Hadal, ASSOCIATED PRESS
Lawmakers meet to swear in Libyan Prime Minister Abdul Hamid Dbeibah's interim government to replace the country's two rival administrations and lead the war-torn North African nation through elections later this year, at the House of Representatives, in in the eastern city of Tobruk on Monday, March 15, 2021. Libya was plunged into chaos following a NATO-backed uprising in 2011 that toppled and later killed long-time dictator Moammar Gadhafi. (AP Photo/Ahmed Al-Hadal)

BENGHAZI, Libya (AP) — Libya on Monday swore in a new, interim government to replace the country’s rival administrations and lead the war-torn North African nation through elections later this year.

Prime Minister Abdul Hamid Dbeibah and his Cabinet were sworn in before the House of Representatives in the eastern city of Tobruk, which is controlled by forces loyal to military commander Khalifa Hifter.

The ceremony came after lawmakers last week endorsed Dbeibah’s government amid international pressure on Libya’s stockholders to implement a U.N.-brokered roadmap that set Dec. 24 as the date for general elections in the oil-rich country.

Dbeibah, a powerful businessman from the western city of Misrata, was appointed last month to lead the executive branch of an interim government, which also includes a three-member Presidential Council, chaired by Mohammad Younes Menfi, a Libyan diplomat from the country’s east.

The parliament’s endorsement came amid corruption allegations at meetings of a U.N.-led political process that appointed the interim government. Dbeibah denied the allegations and called on the U.N. to reveal conclusions of its investigations.

Libya was plunged into chaos following a NATO-backed uprising in 2011 that toppled and later killed long-time dictator Moammar Gadhafi. The country has in recent years been split between rival east- and west-based administrations, each backed by armed groups and foreign governments.