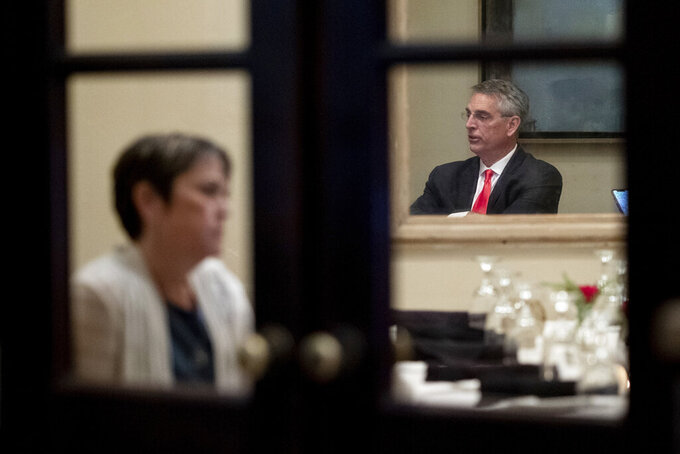 ATLANTA (AP) — Georgia Secretary of State Brad Raffensperger, who was a top target of former President Donald Trump, has won the Republican primary as he seeks reelection.

Raffensperger beat three challengers, including Trump-endorsed U.S. Rep. Jody Hice, who had criticized his handling of the 2020 election. It was not immediately clear which Democrat he would face in November.

“What I have found is that every Georgian wants safe and secure elections with the right balance of accessibility with security. That’s where Georgia voting is today,” Raffensperger told reporters late Tuesday after declaring victory.

Raffensperger was among Trump’s chief targets when the former president turned his wrath on top Georgia officials for not taking steps to overturn his narrow election loss to Democrat Joe Biden in the state. Trump insisted without proof that victory had been stolen from him through widespread voter fraud.

In a now-notorious January 2021 phone call, Trump suggested Raffensperger could “find” enough votes to overturn President Biden’s victory. That led a prosecutor in Atlanta to open an investigation into whether Trump and others tried to illegally influence the state’s election. That investigation is ongoing.

“If you don’t understand what happened in the election of 2020, here’s what happened -- 28,000 Georgians skipped the presidential race and yet voted down ballot in other races,” Raffensperger said.

Hice fully embraced Trump's false claims that the 2020 election was stolen and objected to Georgia’s electoral votes being counted for Biden. State and federal officials, including Trump’s own attorney general, have said there was no evidence of widespread fraud. The votes in Georgia’s presidential election were counted three times, and each tally confirmed Biden’s victory.

Raffensperger punched back, staunchly defending his record and insisting that Georgia's elections are fair and secure. He also made prohibiting noncitizens from voting — a platform popular with conservative Republicans that is already enshrined in Georgia law — a centerpiece of his reelection campaign.

Trump's obsession with his election loss and his unproven claims of widespread fraud have put a spotlight on down-ballot secretary of state races around the country.

Asked by a reporter if his victory was a direct rebuke of Trump, Raffensperger said, “No, I think it’s a direct compliment to the goodness of my fellow Georgians.”

On the Democratic side, State Rep. Bee Nguyen, who occupies the seat formerly held by Democratic gubernatorial candidate and voting rights activist Stacey Abrams, advanced to a runoff.

It was too early to tell which of the other four Democratic candidates she will face in the June 21 contest. They are Floyd Griffin, a state senator and former mayor of the city of Milledgeville; Michael Owens, former Cobb County Democratic Party chairman; John Eaves, former Fulton County Commission chairman; and Dee Dawkins-Haigler, a former state representative from DeKalb County.

Nguyen has served in the state House since winning a 2017 special election to succeed Abrams in a district that includes parts of DeKalb County just east of the Fulton County line and some parts of the city of Atlanta. Nguyen is also a vice chair of the state Democratic Party.