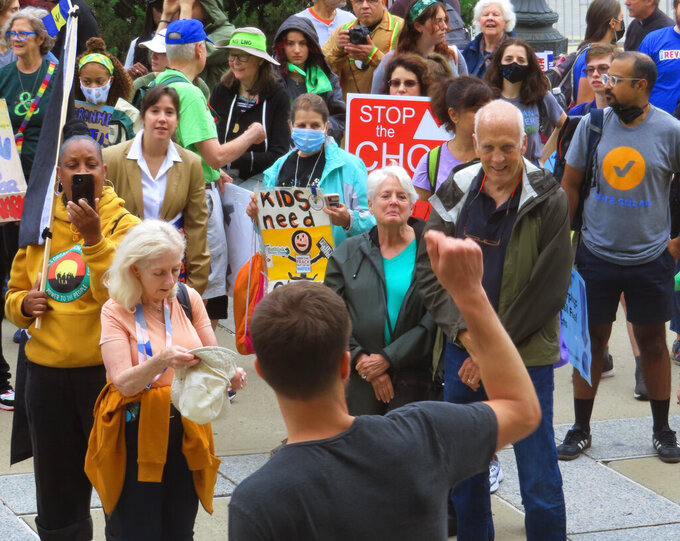 Wayne Parry, ASSOCIATED PRESS
Environmentalists and environmental justice advocates gather at the War Memorial in Trenton, N.J. on Thursday, June 23, 2022 before marching to the state capitol a few blocks away, calling on Gov. Phil Murphy to deny permits to any future projects involving the burning of fossil fuels. (AP Photo/Wayne Parry)

Environmentalists and advocates of environmental justice listed a litany of proposed projects around the state that they want the governor to reject, including power plants and transport facilities for liquefied natural gas.

Many of the proposed projects would be built in minority communities that already deal with substantial amounts of air pollution and other contaminants.

The Democratic governor did not see or hear the protest, however: He was in Washington attending a White House meeting on offshore wind energy development. His office did not immediately respond to a request for comment.

Rey Watson, 17, of Whitehouse Station, said they came to the protest out of frustration that those in power are not doing enough to address climate change.

“I'm a young person; I decided to get involved when I realized our leaders aren't doing anything about the climate crisis,” Watson said. “I want our generation and future generations to live on a healthy, nonpolluted planet. It's up to our leaders to do that.”

The protesters want Murphy, through state government, executive order or a combination, to deny permission for polluting projects to go forward. Their targets included proposed power plants in Woodbridge and Newark, and the transport of liquefied natural gas through the western part of the state near the Pennsylvania border.

Roy Jones, a minister at Mount Zion Baptist Church in Camden, said his already polluted city endures 326,000 trucks a year emitting pollution into the air. With an additional 600,000 or so possible if large-scale transport of liquefied natural gas is allowed, he said there could be nearly a million trucks driving through Camden each year.

“We are talking about very serious diesel emissions into a community that is already overburdened with pollution,” he said.

Julie Ann Ferreira, of Perth Amboy, was protesting a proposed power plant in neighboring Woodbridge that she said would worsen already bad air quality throughout the region.

“I was born and raised in Perth Amboy, and I've suffered from respiratory issues since I was 13,” she said. “People are actively moving out of New Jersey because of the air quality. We have some of the worst air in the nation.”

Wynnie-Fred Victor Hinds, of Newark, was one of many calling on the govenor to reject a hotly contested plan to add a backup natural gas-fired power plant to a sewage treatment plant in Newark's polluted Ironbound section.