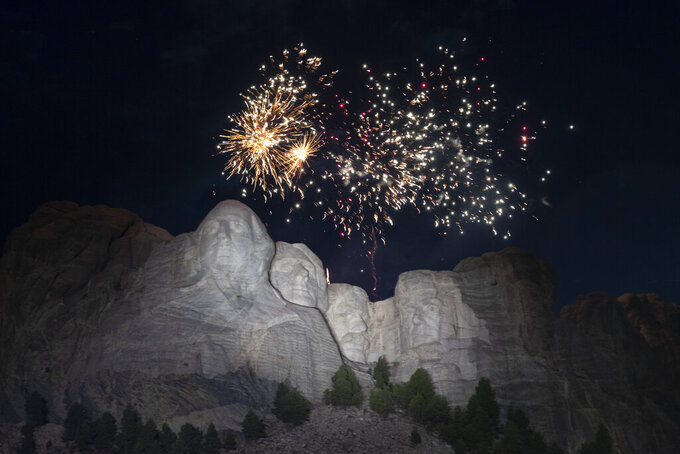 SIOUX FALLS, S.D. (AP) — A federal appeals court on Wednesday dismissed an appeal from South Dakota Gov. Kristi Noem in her lawsuit that attempted to overturn the National Park Service's denial of the state's application to hold a fireworks display at Mount Rushmore to celebrate 2021's Independence Day.

The Eighth Circuit of Appeals found that South Dakota's objections to the Park Service's decision were moot because it was in the past and the federal government was within its rights to deny the state from shooting off fireworks at the national memorial.

"The bottom line is that we cannot change what happened last year, and South Dakota has not demonstrated that deciding this otherwise moot case will impact any future permitting decision," Judge David Stras wrote in the court’s opinion. “Any controversy has, in other words, fizzled out.”

The Republican governor, who has positioned herself for a 2021 White House bid, has used the fireworks celebration as a political rallying point. She hosted former President Donald Trump at the 2020 celebration, and the patriotic display, held during the early months of the COVID-19 pandemic, figured largely in her rise to national prominence. It was also the first time fireworks had been held at Mount Rushmore in nearly a decade.

Noem blamed President Joe Biden for the permit denial and insisted that the court erred in its ruling.

“Unfortunately, the Biden Administration ran out the clock, blocking both our celebration and any serious judicial review," she said in a statement. “The Court should have ruled on the merits to set a standard for future fireworks celebrations.”

South Dakota has paid nearly $230,000 to Consovoy McCarthy, a Virginia-based law firm that has taken up Republican causes across the country, including working for Trump, to represent the state in court.

The court’s decision left open the possibility of the Park Service allowing a pyrotechnic display in the future, and Noem has already applied for a permit for next year. The Park Service denied Noem's 2022 application for fireworks, citing objections from Native American tribes, wildfire risks and other environmental concerns.

The Park Service declined to comment on the ruling.

The National Parks Conservation Association, an independent organization that had filed an amicus brief in the case to support the Park Service, praised the ruling.

“The adverse effects from previous firework displays are well-documented, including threats to water quality and public health and safety, and to the very resources the park was designated to celebrate and protect,” Christine Goepfert, the association's Midwest Associate Director, said in a statement.

Noem had also argued that the Park Service's decision was politically motivated as well as one that should only be made by Congress.

But Stras and the two other judges who issued the opinion disagreed: “Nobody has a right to shoot off fireworks on someone else’s land, whether it be a neighbor; an area business; or as is the case here, a national park.”