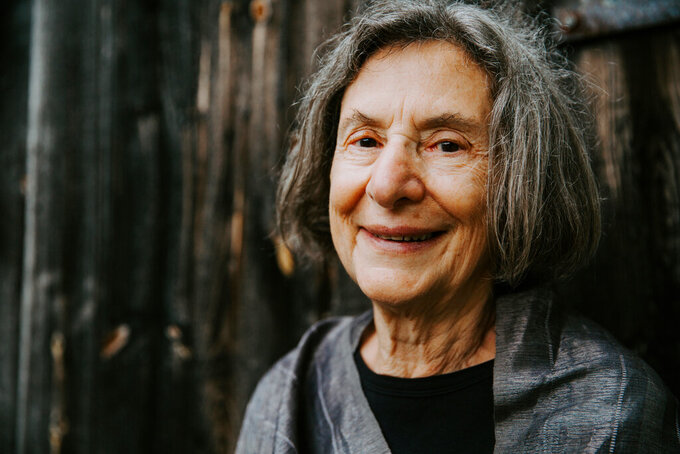 Elise Ruocco, ASSOCIATED PRESS
This July 24, 2018, photo provided by Justin Pritchard shows Isabel Marcus, a pioneering law professor whose advocacy for women’s rights spanned the globe, in Lake Placid, N.Y. Marcus died at 83 on Oct. 31, 2021, in Los Angeles after living with advanced Alzheimer's disease. She spent five decades in academia, mostly at the University at Buffalo, and was twice a Fulbright Scholar. At UB, Marcus co-founded the Institute for Research and Education on Women and Gender, and served as director of graduate and international programs at the law school. (Elise Ruocco/Courtesy of Justin Pritchard via AP)

BUFFALO, N.Y. (AP) — Isabel Marcus, a University at Buffalo law professor and women’s rights advocate who met with protesting students in China’s Tiananmen Square and confronted Operation Rescue protesters closer to home, has died. She was 83.

Marcus spent most of her five decades in academia at the University at Buffalo, where she co-founded the Institute for Research and Education on Women and Gender, served as director of graduate and international programs at the law school, and was twice a Fulbright Scholar.

She died Oct. 31 in Los Angeles after living with advanced Alzheimer’s disease, according to family members.

At Buffalo, Marcus focused on women’s rights and gender equality, becoming a scholar of international human rights. Her public conflicts with Operation Rescue, the anti-abortion group that staged a massive protest in Buffalo in 1992, led to death threats, her family said.

A lifetime of wanderlust took her to Latin America, Europe, Egypt, India, the Middle East and China, where as one of the few Westerners in Beijing in June 1989, she met with students at Tiananmen Square before China's bloody crackdown on pro-democracy protesters. She was evacuated on one of the last flights out along with other professors and students who were on a UB exchange with Beijing University.

As the Cold War came to an end, Marcus — who would spend time in 1997 as a Fulbright scholar in Romania and later Macedonia — turned her attention to developing a legal framework for women’s rights in Central and Eastern Europe. Her seminal work “Dark Numbers” explored the lack of official accountability for domestic violence.

“Her intellectual rigor and willingness to go places others would not helped train a generation of lawyers who have pushed for equal rights in Eastern Europe and beyond,” said her son, Associated Press journalist Justin Pritchard. “She did it at a crucial time in history, and the effects are lasting.”

Marcus was born to a conservative Jewish family in the Bronx in 1938. As a 15-year-old, she was the only girl among several winners of a national “I Speak for Democracy” oratory contest sponsored by the Voice of America. The victory earned her a trip to Washington and a cameo with President Dwight Eisenhower and Vice President Richard Nixon.

She was elected class president as a freshman at Barnard College and later student body president, spending a year away to serve as international affairs vice president for the National Student Association — later finding out it was secretly funded by the Central Intelligence Agency.

Marcus completed her undergraduate education at the London School of Economics, then went to the University of California, Berkeley, where she earned a Ph.D. in political science and a law degree in 1975.

As a graduate student, Marcus was denied a year of leave for her second pregnancy. Her involvement in a gender discrimination lawsuit against the University of California in the 1970s led to denial of employment at state-sponsored universities, Marcus said.

She taught law and public policy for several years at the University of Texas, Austin before arriving in Buffalo, where she would stay until retiring at age 80. She also taught at universities in a dozen other countries.

At UB, Marcus led students on trips to the former Yugoslavia and elsewhere. She also would bring promising graduate students from overseas to study in Buffalo, often paying their way herself. As part of the Isabel Marcus International Research Fellowship, she sponsored young women to stay in her apartment, family members said.

In 2012, the University at Buffalo formally recognized her contributions to international education. She also worked with Erie County courts to strengthen the help given to survivors of domestic violence.

In addition to her son, she is survived by a daughter, the designer Erica Pritchard, and four grandchildren.