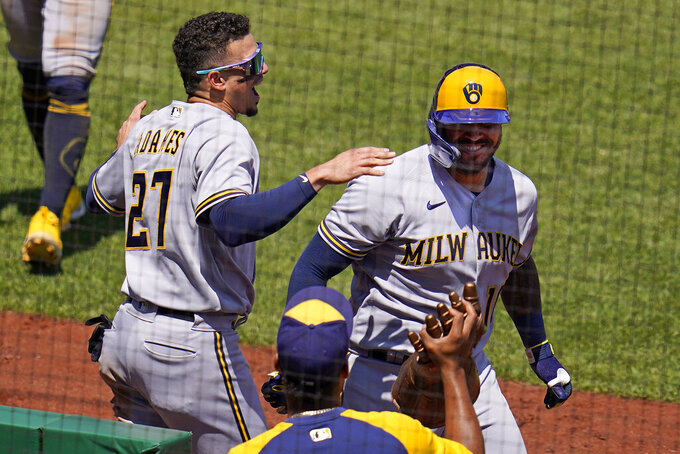 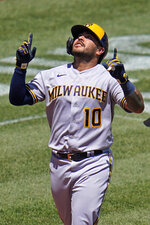 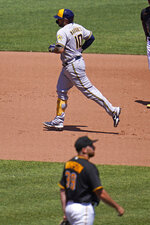 PITTSBURGH (AP) — Brandon Woodruff struck out eight in six scoreless innings, steering the Milwaukee Brewers to a 2-0 win over the Pittsburgh Pirates on Sunday afternoon.

Woodruff (7-3) gave up six hits, his most since May 9, but made up for it with a fifth straight start in which he didn't give up more than two earned runs. The right-hander has 18 strikeouts and no walks in 11 innings since returning June 28 after being sidelined with Raynaud’s syndrome, which decreased blood flow to his pitching fingers.

“I just tried to go out there, throw strikes and get ahead,” Woodruff said. “Tried to get some quick outs. It's good to not give up free passes because they had some traffic today. ... I've worked hard on trying to get my delivery and everything synced up.”

Omar Narváez gave the Brewers their two runs by driving a cutter from Pirates starter Zach Thompson (3-6) 427 feet in the fifth inning over the Clemente Wall in right field. The longest homer of Narváez's major league career nearly bounced into the Allegheny River, was his third of the season and ended a 25-game drought.

“It's something I've been working on,” Narváez said. “Trying to be more selective on pitches out over the plate. Try to do damage with it. ... It just felt good to hit the ball good and finally drive the ball.”

Josh Hader struck out two and got Bryan Reynolds to fly out with the bases loaded in the ninth for his 25th save.

Brewers catcher Pedro Severino did not play Sunday, but was reinstated after his 80-game suspension for testing positive for a fertility drug that's considered a performance enhancer.

Milwaukee outscored Pittsburgh 32-17 in the four-game series, but earned only a split.

“Overall, it was a good road trip,” Brewers manager Craig Counsell said. “We beat a good team in Tampa twice. We got by the Pirates series with two very well-pitched games.”

Thompson surrendered two runs on four hits with two strikeouts in 4 2/3 innings, and faced one over the minimum through the first four innings before walking Kolten Wong on four pitches to start the fifth, setting up Narváez’s home run. Thompson hadn't pitched since June 17 because of nerve inflammation is his right forearm.

Pittsburgh struck out 14 times, stranded 11 and was 0 for 10 with a runner in scoring position. Its best chance before the ninth came in the fifth, when Jack Suwinski laced a leadoff double to right. The Pirates were unable to move him before Woodruff got Ke'Bryan Hayes to ground to short, ending the inning.

Brewers: OF Tyrone Taylor was placed on the seven-day concussion injured list, retroactive to July 2.

Pirates: RHP Duane Underwood Jr. was activated from the COVID-19 injured list. He relieved Thompson, allowing one hit and one walk with one strikeout in 1 1/3 innings. ... RHP Yerry De Los Santos was placed on the COVID-19 IL.

Brewers: LHP Eric Lauer (6-3, 4.02 ERA) will take the mound Monday, when Milwaukee starts a three-game home series against the Chicago Cubs. He has allowed 20 earned runs in his past four starts after giving up five in his previous four.

Pirates: LHP José Quintana (1-4, 3.43) is expected to start Tuesday, when Pittsburgh welcomes the Yankees for the first of a two-game set. Quintana has not won since May 9 despite allowing fewer than four earned runs in seven of nine starts since.