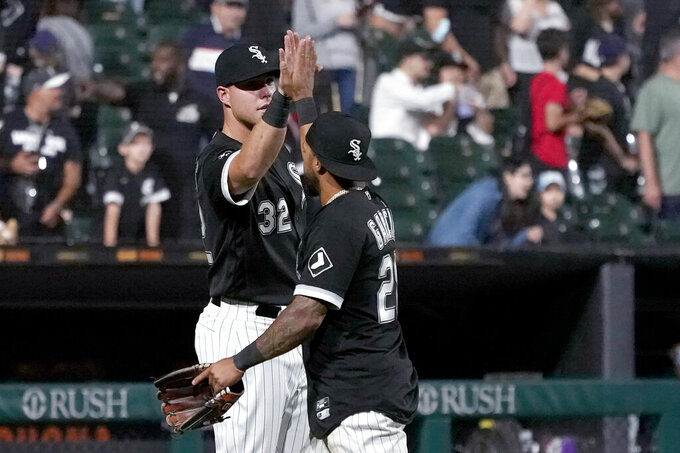 CHICAGO (AP) — Joe Maddon's first game back in Chicago was similar to his final game with the Cubs: a loss.

Rookie Gavin Sheets hit a long three-run homer and had four RBIs in his first three-hit game, and the White Sox beat the Los Angeles Angels 9-3 on Tuesday night.

Maddon managed the Cubs for five years, leading them to the playoffs four times and a World Series title in 2016 that ended the team’s 108-year championship drought.

“I thought it would always have been interesting to be able to hang together for a couple more. I can't deny that," Maddon said before the game. “That group right there was not only very talented, they're very charismatic, too. I like the people in that room. The way they dealt with pressure or expecations was outstanding.”

Maddon's contract was not renewed by the Cubs at the end of the 2019 season. He was hired to manage the Angels, a team he coached before he spent 2006-14 as Tampa Bay's manager.

“Of course, you would think retrospectively you'd like to have a couple more years to get one more shot at the gold ring. It didn't happen,” Maddon said of his time in Chicago. “And with that, I've had this wonderful opportunity to come back to California, be with the Angels again.

"So that's that side. The flip side is it's actually turned out pretty well for me and my family. I don't mean to sound selfish, but where I'm at right now with the group I'm with is pretty special. I'm looking forward to our next trup to the World Series here, too, now.”

Sheets hit a go-ahead single in the second inning off Packy Naughton (0-2) and made it 6-1 with a three-run homer in the third. He narrowly missed a second home run when he doubled to the right-field wall in the fifth.

“He made a statement,” manager Tony La Russa said of the 6-foot-5 outfielder. "He got a pitch to hit, and he hit it a long way. Then he got another one. “There's an old saying, when you're a hungry hitter you have a chance to be a productive hitter — and he's a hungry hitter.”

Sheets, a left-handed hitting 25-year-old, said he got a confidence boost when La Russa placed him in the lineup as designated hitter against Naughton, a lefty.

“It was huge,” Sheets said. "For him to put me in there in a big game when we're still still fighting for home-field advantage was big for me. Being in the big leagues is a dream come true. To be here and contribute, you can't ask for more than that in a rookie year."

Luis Robert had a solo homer and a double as the AL Central-leading White Sox expanded their margin over second-place Cleveland to 12 1/2 games.

Leury García and César Hernandez each had two hits and an RBI for the White Sox (83-61), who reduced their magic number for clinching the division to seven.

Chicago starter Lucas Giolito lasted four innings in his return from a strained left hamstring. He allowed three runs, on homers by Phil Gosselin in the first and Jared Walsh, in the fourth, Giolito walked two and struck out eight, including five in a row swinging.

Gioloto said his hamstring felt fine and that he was on an 80-pitch limit in this one. He tossed 87.

“In my mind, I want work at least five innings with 80 pitches,” Giolilto said. "I wasn't efficient enough..

All-Star shortstop Tim Anderson went 1 for 5 in his return from a strained left hamstring after missing 12 games.

“In the second and into the third they were just getting on everything,” Maddon said. “We put more confidence in their tank with the home run by Sheets. And that mentally did some thing for them and against us.”

Robert was clipped in the helmet by a pitch from Oliver Ortega in the fifth, but got up and remained in the game.

Maddon said “if everything goes well between now and then” RHP/DH Shohei Ohtani (9-2, 3.36) could start this Friday against Oakland. The two-way star was tagged for six runs in 3 1/3 innings on Friday at Houston, ending a streak of eight straight winning decisions. Ohtani, second in the majors with 44 homers, went 0 for 4 with three strikeouts and a walk on Tuesday.

Eloy Jiménez showed off making the final out in the top of the third — and the play had La Russa on edge for a few seconds.

The Dominican slugger ran back and stretched to the top of the left-field fence to pull in David Fletcher’s drive. Jiménez tumbled to the ground after hitting the wall. After a few second, he rolled up, flashed a “V” with his fingers, grinned and trotted off.

“Holding my breath would be the nicest family way to describe the way I felt," La Russa said. “That was so scary.”

Angels: OF Jo Adell remained out of the lineup with soreness in the hip and backside area. … Maddon expects RHP Austin Warren and RHP José Marte (COVID-19) to be activated this weekend.

White Sox: Placed OF Andrew Vaughn on the 10-day IL retroactive to Friday with lower back inflammation and right-handed reliever Ryan Tepera on the 10-day IL retroactive to Sept. 11 with a cut right index finger. Tepera cut his finger when he grabbed a doorframe in his apartment. … The White Sox recalled C Zack Collins and LHP Jace Fry from Triple-A Charlotte. Chicago optioned C Seby Zavala and INF Danny Mendick to Charlotte.