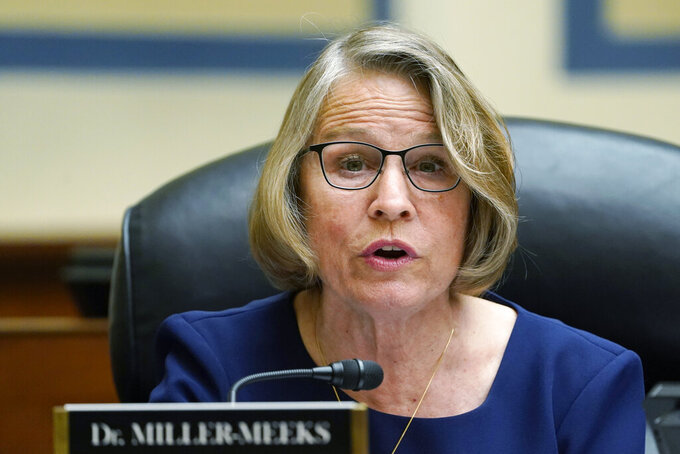 DES MOINES, Iowa (AP) — Republican Rep. Mariannette Miller-Meeks said Wednesday that she plans to run for reelection in another Iowa congressional district next year, which would avoid a head-to-head race against Democratic Rep. Cindy Axne.

The two congresswomen were drawn into the same district through the once-a-decade redistricting process. The electoral maps approved by the Republican-led Legislature and signed by GOP Gov. Kim Reynolds on Nov. 4 moved Miller-Meeks' home county of Wapello into the 3rd District.

Miller-Meeks, of Ottumwa, said at a news conference in Davenport that she will seek election in the newly drawn 1st Congressional District rather than the 3rd District. She wouldn't say whether she would move into the new district, which the law doesn't require, but said her physical location would be less important than whom she is serving.

“I will make that decision whether I do or not," she said. “The most import thing was to let people know what I'm doing so that they can continue their plans or change their plans in accordance with where I was running.”

The Constitution does not require people running for the U.S. House to live in the district they represent and candidates in other states, including California, have successfully run to represent districts they didn't live in, said Donna Hoffman, a political science professor at the University of Northern Iowa.

“Practically speaking, though, we’ve seen congressional incumbents move. It’s not necessary, but politically speaking, it’s difficult to run if you don’t live in the district. But it’s not impossible,” Hoffman said.

It's not uncommon for House members to move to avoid incumbent contests.

Miller-Meeks said she wouldn't have had reservations about taking on Axne, but that she didn't want her current constituents to feel she was betraying them.

A run against Axne likely would have been challenging for Miller-Meeks, who won in November 2020 by just six votes. She previously unsuccessfully tried to unseat Democratic incumbent Dave Loebsack three times and won the 2020 race against Democrat Rita Hart after Loebsack didn't seek reelection.

Axne defeated incumbent Republican Rep. David Young by more than 7,700 votes in 2018 to become one of the first women to be elected to the U.S. House from Iowa. Young attempted to win back the seat back in 2020, but Axne won again, defeating him by more than 6,200 votes.

Axne is expected to announce her intentions within the next few days.

Miller-Meeks will have at least one opponent for the Republican nomination, as Bettendorf real estate business owner Kyle Kuehl said he would run for the seat. Kuehl, who served as a sniper in the Iowa Army National Guard and was deployed to Afghanistan in 2010, told the Quad City Times that he believes “there are way too few veterans in Congress and way too few business owners in Congress, and, honestly, that’s why not much is getting done.”

The Republican nominee could face Democratic state Rep. Christina Bohannan, a University of Iowa law professor who won her Iowa House seat in 2020 by defeating a Democratic incumbent in the primary and running unopposed in the general election.

The newly configured map moves several counties that were part of Miller-Meeks' existing district into the 3rd District. It renames the southeastern Iowa corner district the 1st District.

Democrats make up 35% of the active registered voters in the district, Republicans make up 32%, and nonaffiliated voters make up 31%, suggesting a competitive district for both major parties.

Last November, Republican Donald Trump had a 2.9 percentage point vote margin of victory in those counties. He received 51.4% of the presidential votes in those counties, racking up large margins in the rural counties while Joe Biden got 48.5% by turning out a huge vote advantage in Johnson County, which includes Iowa City and the University of Iowa. Biden also won by a smaller but significant margin in Scott County, a traditional Democratic county.